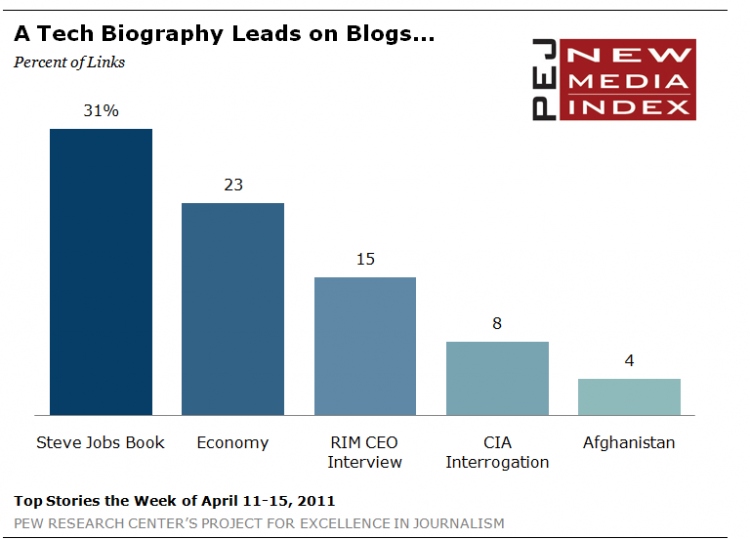 The first authorized biography of Apple CEO Steve Jobs—due out in 2012—captivated bloggers and tweeters alike, becoming one of the rare stories to figure prominently in both social media platforms in the same week.

For the week of April 11-15, the Jobs book ranked No. 1 on blogs, with almost a third (31%) of the news links, and ranked second on Twitter at 7%, according to the New Media Index from the Pew Research Center’s Project for Excellence in Journalism.

This is the first biography in which Jobs agreed to participate, something that appealed to internet commenters dissatisfied with several previous unauthorized biographies about the Apple CEO. The author of the book was also announced—veteran journalist and author Walter Isaacson.

While technology stories are very popular on Twitter, they do not frequently dominate on blogs. This was the first time that anything related to Apple placed among the top stories on blogs in 2011. And it represents only the third time that a technology topic has appeared among the top five stories any week this year.

On Twitter however, either Apple itself or an Apple product was one of the top stories eight times in 14 weeks in 2011.

A technology story also registered as the No. 3 subject on blogs, at 15%. It featured a clip of Mike Lazaridis, CEO of Research In Motion (the company that makes BlackBerries), ending an interview abruptly when asked about the company’s security problems. The discussion on blogs mainly focused on whether or not the interview was fair.

Two stories about the economy accounted for 23% of the links, one looking at what President Obama was expected to say in a his April 13 speech about the deficit and the other an op-ed about eliminating Roth IRAs.

The No. 4 story, with 8% of links, was about the CIA’s new policy of de-emphasizing detention of terror suspects caught abroad (other than in Afghanistan and Iraq). The No. 5 story (4%) detailed an accidental U.S. attack on a convoy of civilians in Afghanistan.

The story that made blog headlines this past week was about Apple CEO Steve Jobs, who agreed to cooperate with the biography written by Walter Isaacson, the former CEO of CNN, managing editor of Time magazine, and currently the CEO of the Aspen Institute. Isaacson also has written biographies about Henry Kissinger, Benjamin Franklin and Albert Einstein. The book is to be called iSteve: The Book of Jobs. And this first authorized biography ignited the blogosphere, and not just on English-language blogs: Blogs in Arabic, Spanish, German and Japanese also linked to the story.

The overall tone of the commentary was supportive of Jobs’ collaboration with Isaacson on the project.

“Put it this way, Isaacson is more than qualified to write a biography on Steve Jobs,” said Upgrade OS X.

“Somewhat cheesy title aside, the biography is likely to be interesting not simply because of its topic …but because of the hitherto unseen levels of access to which Isaacson has achieved,” wrote Chris Davies at Slash Gear.

“This is one biography you’re going to want to read in 2012. Isaacson is the only author that has been able to gain the trust of Steve Jobs,” wrote Gary Ng at iPhoneinCanada.

But a minority of bloggers were less laudatory and at least one brought up Jobs’ health issues.

“That is why I will never read this authorized biography of Steve Jobs, with its laughably bad title and its near-certain impossible mission,” wrote Brian S Hall of The Smartphone Wars Community, “And, yes, in case you are wondering, it is perfectly common for you to think that Jobs has authorized this biography because he is at death’s door.”*

Tweeters were also generally excited about the book and anxious to read it.

“I Want it NOW,” wrote Trimtabber.

“Will it be #magical?” asked Charlie Hoover.

Bloggers had an interesting reaction to the video showing RIM CEO Mike Lazridis storming out of an interview when BBC technology correspondent Rory Cellan Jones asked him a question about BlackBerry security concerns.

They were sympathetic to both the journalist and the interviewee, and several noted that since they were seeing the clip out of context, they did not feel that they had enough information to pass judgment. Perhaps due to the international context of the discussion (a British journalist interviewing the CEO of a Canadian company about security issues in India and the Arab world), the clip was discussed on blogs in various languages, including Chinese, French, Spanish and Romanian.

“We give Mike a small benefit of the doubt,” wrote L.K. at RIM Mobile, a fan site, “It almost seems Mike may have misinterpreted ‘security issue’ as being a problem with the BlackBerry platform instead of with national security of India and Middle Eastern countries.”

“[T]he question that tipped him over the edge seemed so innocuous—something that your average CEO would be able to punt into the long grass without thinking about it…” wrote Ben Matthews at The Comms Blog, “In fairness to Mike, we don’t know what went on before the short clip the BBC posted.”

“Walking off an interview can sometimes create worst reactions than to stay clam and try to address a question (whether you see it as fair or not),” wrote Kempton at ideas Revolutionary, “Sometimes walking out of a harassing interview is the only way but I don’t see the BBC interview as one of those.”*

“My knee-jerk reaction was that Lazaridis was out of line. However, I freely admit that I’m biased toward the media in most circumstances such as this. Far too often we get nothing more than PR-coached responses, so it’s decidedly refreshing when someone decides to be candid,” wrote Brad McCarty at The Next Web, “Obviously Lazaridis had PR with him—you can hear the voice, faintly, suggesting that the interviewer should ask other questions—but he did at least seem to be forthcoming with his answers.” 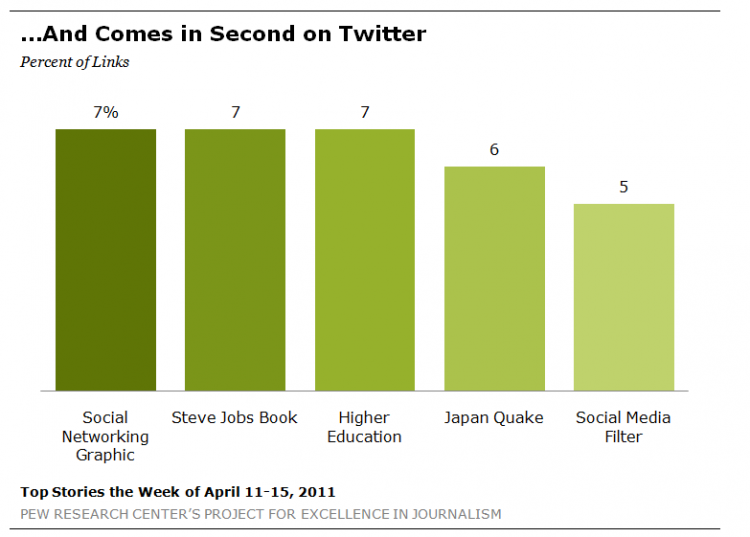 The top story on Twitter last week, with 7% of the links, was a Mashable infographic called The Winners & Losers of Social Networking that provided details about the popularity of different social networks and demographic information about their users. Users tweeted the graphic in order to recommend it to their followers.

“Interesting trends and insights, worth a peek,” said Andrew Barker.

The Steve Jobs book took second place with 7% of tweets and right behind (also at 7%) was a TechCrunch article about PayPal cofounder Peter Theil’s thoughts on higher education. Thiel believes that there is a “higher education bubble,” and that too many people go to college given the false belief that higher education will protect them from hardship.

Most simply retweeted the article, but a few opined that it was noteworthy.

Next came two stories about the post-earthquake crisis in Japan in fourth place with 6% of links.

And a Mashable article about social media and journalism was at fifth with 5% of links. The article explained how social media have created incentives for people to share quality news content with each other.

The two most popular news videos on YouTube last week were also among the top five videos the previous week. No. 1 was an international soccer match in Egypt that erupted in chaos. And the second video was a satirical ad by the National Republican Senatorial Committee criticizing President Obama.

The third most viewed video involved the Japanese disaster—a subject which has been featured frequently in the past four weeks. However, this time the story had a positive twist.

Three weeks after the March 11 earthquake and tsunami hit Japan, a two-year-old dog named Ban was found alive at sea and rescued by the Japanese Coast Guard. Last week, viewers witnessed the reunion of the dog and its owner at an animal care center in Miyagi prefecture. The same video includes scenes of the operation that rescued the dog from the debris of a house that was swept to sea by the tsunami.

The owner of the dog, whose face is partially covered by a mask, wished to remain anonymous.

Digital: As Mobile Grows Rapidly, the Pressures on News Intensify