Events occurring outside the borders of the United States led the news for the eighth time in a nine-week span that has tested the mettle of journalists and the resources of their newsrooms. 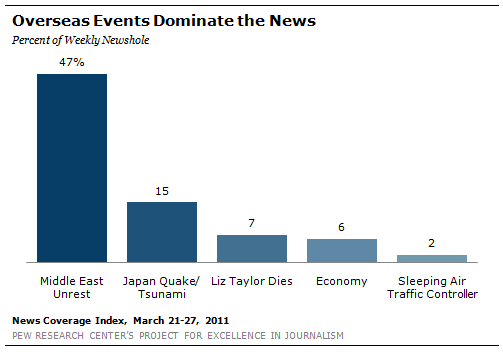 From March 21-27, the turmoil in the Middle East—particularly the entry of the U.S. and NATO military forces into the Libyan conflict—filled 47% of the newshole studied by the Pew Research Center’s Project for Excellence in Journalism. The No. 2 story, the aftermath of the Japanese earthquake—primarily involving concerns about radiation—accounted for 15%.

That represents a reversal of the previous week, when Japan accounted for 57% of the coverage and Libya 17%. The narrative has whipsawed between these two events for the past several weeks.

With the Mideast dominating the news agenda since late January, and the Japanese earthquake and tsunami generating major attention since they struck March 11, almost half the overall coverage this year (43%) has been devoted to international events. That is almost double the normal level. All this comes at a time when newsroom cutbacks have taken a toll on foreign reporting resources.

The current chapter in the Mideast story began on March 17 when the U.N. Security Council voted to enforce a Libyan no-fly zone, a move that paved the way for direct U.S. military involvement.  Last week, there were two basic themes in the coverage of the conflict. One involved the changing situation on the ground; the other focused on the intensifying internal debate over President Obama’s handling of the situation.

Those two subplots were enough to make the aftermath of the Japanese earthquake, and particularly the focus on the continuing dangers posed by radiation at the damaged nuclear plant, seem suddenly less urgent.

The No. 3 story last week, at 7%, was the death of iconic movie star and celebrity Elizabeth Taylor at age 79. While Americans under 40 may not remember her film career, many media tributes last week posited that her stardom and impact far exceeded her body of work.

The economy was the fourth-biggest story last week, at 6%, although no one storyline dominated. Unemployment claims dropped a bit and there was more legal wrangling over the effort to curtail union collective bargaining rights in Wisconsin.

Finally, the No. 5 story (2%) was the air traffic controller who fell asleep at Reagan National Airport, an event that sparked a larger public debate about airport staffing.

Filling nearly half of all the time on radio and television and space in print and online, unrest in the Middle East was the top story last week in all five media sectors studied. But it was, first and foremost, a talk show story. For the week, the cable and radio talk hosts studied by PEJ devoted nearly three-quarters of the airtime studied (72%) to that subject. One major reason was that domestic politics and criticism of the president became a bigger part of the narrative.

When Barack Obama returned from a Latin American trip last week, he encountered growing doubts about his handling of the Libyan situation—ranging from criticism that he acted too late to fears that the U.S. was wrong to intervene. Some critics also asserted that the president had failed to clearly enunciate and explain his Libyan policy to the American people. (Obama gave a March 28 speech to address that subject.)

“Within minutes [after Obama] landed on the ground, he was hit with bi-partisan Congressional criticism,” a letter from House Speaker John Boehner with a “slew of unanswered questions” and a “very tepid statement of support” from House minority leader Nancy Pelosi, reported NBC’s Chuck Todd. “They have this public relations crisis.”

Critics came from both sides of the pundit spectrum. On MSNBC, liberal columnist Eugene Robinson wondered why the U.S. was fighting in Libya, but not in Yemen, where there is also a popular uprising against the leader. “We do it in Libya because we don‘t like Gaddafi, but [that] is not a compelling reason [nor] the keystone of a doctrine that you can use going forward or even apply consistently now,” Robinson declared.

On the right, Fox News Channel host Sean Hannity blamed Obama for not consulting Congress, adding: “A series of reports indicates that the anti-Gaddafi rebels have direct ties to al-Qaeda…I think it’s pretty safe to say these are the people America should not be supporting abroad.”

Hannity’s Fox colleague, Bill O’Reilly took a different view, saying he “supports the coalition action against Libya, and according to a new CNN poll, 70 percent of Americans agree with me.”

Meanwhile, more than 8,000 miles away from the Beltway in Libya, the media were trying to assess the impact of U.S./NATO firepower on fighting that had recently tilted toward the pro-Gaddafi forces. In some cases, there was a kind of cavalry-to-the-rescue feel to the narrative. 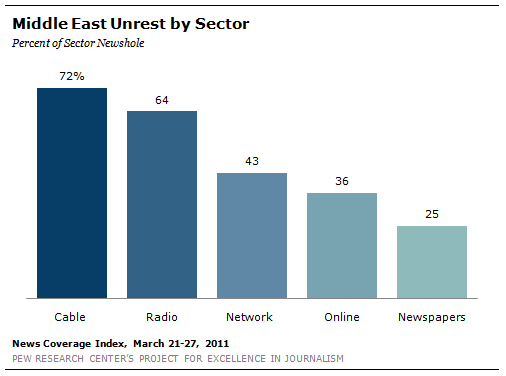 “The airstrikes, led by France, carved a trail of devastation that stretched more than 15 miles along the highway to Ajdabiya, another city under siege by forces loyal to Gaddafi,” reported the Washington Post on March 21. “The destruction brought a new hope to Libyan rebels seeking to end Gaddafi’s 41-year-long rule. Less than 24 hours earlier, they were on their heels as Gaddafi’s tanks and trucks pushed into Benghazi, the cradle of Libya’s month-old rebellion.”

And by the weekend, the main combat storyline had the tide once again shifting to the anti-Gaddafi forces who were driving their foes backward.

“Rebels said on Sunday forces loyal to Muammar Gaddafi had retreated westwards and may be heading back towards the Libyan leader’s stronghold of Sirte, which is about 375 km (230 miles) away from Tripoli,” stated a March 27 Reuters story that captured the theme of the day.

And in one sign of where the Mideast’s rolling revolutions may head next, some modest coverage of the protests in Syria—a very tightly controlled state—showed up in the press last week.

Coverage of the situation in Japan fell by almost 75% from the previous week, but the key storyline remained the same. Concerns about radiation being released from the crippled Fukushima plant accounted for the overwhelming majority (about three-quarters) of the week’s coverage.

There were several ominous developments that made news last week, including concerns about radioactivity in Tokyo’s drinking water.

On March 23, MSNBC daytime anchor Tamron Hall reported that “parents in Tokyo are being told not to let their infants drink tap water. Water samples there contain more than double the amount of legal limit of radioactive iodine, which can cause thyroid cancer.”

Two days later, the Los Angeles Times reported on another aspect of the worsening situation.   “Japan’s government Friday urged residents living within 18 miles of the stricken Fukushima nuclear power plant to voluntarily leave their homes and suggested that officials could expand the mandatory evacuation zone,”  the story stated, adding that, “nuclear safety agency officials said that they suspected a breach in the reactor core of one unit at the quake-damaged plant.”

The earthquake’s aftermath drew the most attention last week in the network news (22%) and online (21%) sectors, but accounted for only 5% of the coverage on cable news. That represents a massive drop-off from the previous week when the subject filled 73% of the cable newshole.

In essence, cable—often a bellwether of the most potent story of the moment—abandoned Japan for Libya last week.

The death of Elizabeth Taylor on March 23 was a major media event, but it was also a rare celebrity story that generated the most coverage (13%) in the newspaper sector as tributes and obits filled the nation’s front pages.

The dominant theme of many media remembrances was that Taylor’s looks, body of work and megawatt celebrity made her what NBC anchor Brian Williams called “the last of the true movie stars.”  In Williams’ tribute on his March 23 newscast, he noted that her career “in terms of American presidents…spanned from FDR to Obama.” She gained stardom at age 12 in “National Velvet,” had eight marriages and became the first screen star to sign a million dollar contract when she made “Cleopatra.” In her later years, Taylor was probably best known as a tireless AIDS activist.

“She was always in the public eye,” Williams declared. “So of course, nothing about her life ever seemed quite normal.”

From March 21-27, Barack Obama was the biggest figure in the news, registering as a dominant newsmaker in 6% of the week’s stories as the political debate over his strategy in Libya heated up. That is an increase from 4% the previous week. But it is not a particularly high number for Obama, even as critics tried to make him part of the story. (To register as a dominant newsmaker, someone must be featured in at least 50% of a story.)

Muammar Gaddafi was No. 2, at 5% of the stories, marking the fifth consecutive week that Libya’s mercurial leader was either the first and second leading newsmaker in the U.S. media. The No. 4 newsmaker was another beleaguered Mideast leader on the ropes, Yemen’s President Ali Abdullah Saleh, at 1%. Secretary of State Hillary Clinton, a key player in the unfolding Libyan crisis, was the fifth-biggest newsmaker, also at 1%.

The one big newsmaker last week who had nothing to do with the turmoil in the Middle East was Elizabeth Taylor, who was a dominant figure in 3% of the week’s stories.

*Due to technical problems that disrupted satellite reception, some television programs—including daytime cable news from Tuesday, March 22, and some morning network as well as daytime and evening cable news from Friday, March 25—were not included in this sample.