The surprise victory of a tea party-backed candidate in Delaware’s Republican Senate primary fueled the biggest week yet for coverage of the 2010 midterm elections.

Christine O’Donnell’s September 14 upset over nine-term Congressman Mike Castle pushed the midterm elections to the top of the news agenda, where it filled 30% of the newshole during the week of September 13-19, according to the Pew Research Center’s Project for Excellence in Journalism. The previous high water mark for midterm elections was 18% the week of May 17-23, when incumbent Sen. Arlen Specter was defeated in the Pennsylvania Democratic primary.

Last week, the midterms were the top story in all five of the media sectors studied by PEJ and completely dominated the ideological radio and cable talk shows, accounting for nearly three-quarters of the airtime examined. O’Donnell herself generated so much attention that she proved to be the week’s leading newsmaker, figuring prominently in almost twice as many stories as President Obama.

In the wake of O’Donnell’s victory, the media narrative last week focused on several themes—the strength of the tea party movement, the possibility that Democrats might now hold an endangered Delaware Senate seat and growing fault lines between the GOP establishment and tea party insurgents.

The U.S. economy (No. 2 story) accounted for 16% of the newshole last week, about half the coverage devoted to the midterms. A subject that has lately been driven by grim indicators of economic health instead focused last week on tax policy, most notably a debate over whether to extend Bush Administration tax cuts.

Three other stories rounded out the top five last week, but each received only a fraction of the coverage given to politics. News about the U.S. education system was the No. 3 story of the week. The president’s visit to a Philadelphia school, the future prospects for the District of Columbia’s controversial schools chancellor and a study comparing higher education achievements by gender added up to 3% of the newshole.

The No. 4 story was a combination of several items related to the war in Afghanistan. The media highlighted parliamentary elections there and profiled the only living serviceman to receive the Medal of Honor since the war in Vietnam. Altogether, the conflict filled 3% of the newshole.

Finally, at 2%, was the safe return of an American hiker who had been captured and held by the Iranian government for more than a year. The coverage focused on Sarah Should’s release and the negotiations that led up to it, but also on the implications for diplomatic relations between the U.S. and Iran.

Not since the summer, when the media were fixated on the Gulf oil disaster, has a story generated as much attention as the elections did last week. Indeed, the last time any story achieved more coverage was the week of June 14-20, when the oil spill filled 44% of the newshole. (That was the week when oil industry executives testified before Congress and President Obama addressed the nation). 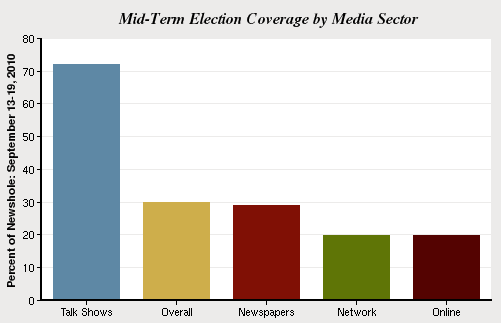 One race in particular drove last week’s midterms coverage—the Delaware Republican primary on September 14. Interest in the race made the midterms the No. 1 story in all sectors of the media.

Two sectors, cable TV (42%) and radio (42%) devoted nearly half their airtime last week to the mid-terms. And the ideological talkers on cable and radio—who tend to focus on big political stories—devoted even more, 72%, to the subject.  Three others sectors, newspapers (29%), network TV (20%) and online news (20%), devoted somewhat less space to the story.

Overall, about half of the midterm election coverage focused on the role of the tea party movement in the events of last week. That discussion was sparked by Christine O’Donnell’s emergence onto the national stage after she upset Delaware Rep. Mike Castle in the Republican primary race.

O’Donnell’s victory was newsworthy for several reasons. Her controversial positions on a number of social and policy issues made her a darling of the tea party voters, but turned her into a lightening rod in the media. And her defeat of the more experienced and mainstream candidate  was viewed as changing the odds in the November general election, a contest now seen as favoring  Democrat Chris Coons—who had been trailing Castle in the polls.

Other tea party-backed candidates have won high profile primaries in contests in Alaska, Kentucky and Nevada, but none of those wins seemed to create quite as much media buzz as O’Donnell’s.

On September 14, as votes were being tallied, MSNBC’s liberal host Rachel Maddow anchored a panel consisting of the channel’s other prime-time hosts.

One of them, Chris Matthews, made a prediction about the GOP reaction: “They’re initially going to embrace her because she’s their candidate, and they’re going to have to win with her. She’s part of their victory strategy right now. Delaware has to hold as a Republican state if they’re to pick up a net 10 seats. So they’re going to need her to win. So whatever they’re going to think, they’re going to say positive things.”

Matthews, however, may have overestimated the unity of the Republican Party at that moment.

Hannity responded by saying, “This is probably one of the few times we’re going to disagree here, because I’ve met her, I’ve interviewed here a lot over the years, I’ve found her quite impressive, and more importantly, she is a solid conservative.”  A few days later, Rove changed his tack and evinced support for O’Donnell after being criticized by some prominent conservatives, including Sarah Palin, Rush Limbaugh and Michelle Malkin.

An article in USA Today on September 16 summarized the opportunities, but also the perils for the GOP posed by the tea party’s influence in the midterms.

“For the tea party, upstart Christine O’Donnell’s decisive victory over veteran Rep. Mike Castle in Delaware’s GOP Senate primary was a crowning triumph, a symbol of the voter dissatisfaction that shrouds the crucial midterm elections in November.

But for the Republican Party—whose leaders had cast O’Donnell as unelectable and unstable—the vote in Delaware symbolized an identity crisis within the GOP that could complicate its push for big gains in the fall elections that will decide control of Congress.”

Other primary results made less of a splash in the news, including: the neck-and-neck Republican Senate primary in New Hampshire won by Kelly Ayotte; Charlie Rangel’s and Carolyn Maloney’s decisive victories in New York Democratic congressional primaries; and tea party-backed Carl Paladino’s defeat of Rick Lazio in the contest to decide which Republican will face Andrew Cuomo for the New York governor’s seat.

The rest of the Week’s News

The U.S. economy was the No. 2 story last week, filling 16% of the newshole—just shy of the 17% it received the previous week when it was the No. 1 subject overall. The greatest portion of the economic coverage—about one quarter—focused on the debate over extending the Bush administration’s tax cuts for the wealthiest Americans.

In an interview on CBS’s “Face the Nation,” House minority leader John Boehner told Bob host Schieffer that he would vote for President Obama’s proposal to sunset some of the tax cuts, if it were his only choice. The New York Times on September 13 analyzed the political ramifications: “Boehner’s decision is likely to reframe both the final intense weeks on Capitol Hill before the elections and the fall campaign, in which embattled Democrats have planned to paint Republicans as obstructionists favoring the rich over the middle class.” Boehner later backtracked on his comments.

The No. 3 story of the week—education—received substantially less coverage (3%) than either the mid-terms or the economy, and was not focused on any single event. Obama delivered a speech to school children in Philadelphia, where a year earlier he had stirred up some   controversy for doing so. Also in the news were the results of a study showing that the majority of graduate degrees are now granted to women. Following the defeat of Washington D.C. mayor Adrian Fenty, questions about the fate of schools chancellor Michelle Rhee under a new mayoral administration also fueled some of the education coverage.

Several events made the ongoing conflict in Afghanistan the No. 4 story of the week including Staff Sgt. Salvatore Giunta, who became the first living soldier to receive the Medal of Honor since the Vietnam conflict.  Giunta, who was recognized for valor during an attack, told his story in front of reporters at the Pentagon. In addition to the medal ceremony, the media covered parliamentary elections in Afghanistan, where turnout was reportedly low amid attacks on polling stations by the Taliban. Altogether, press coverage of the conflict totaled 3%.

Finally, Iran’s release of one of the three American hikers detained for over a year became the No. 5 news story of the week (2%). Some news organizations speculated about what the gesture means in terms of broader Iran-U.S. relations. But as CNN’s national security contributor Fran Townsend told Wolf Blitzer on September, 14:  “I’m not sure we can read much into this,” citing the fact that Iran still held onto the two other hikers. 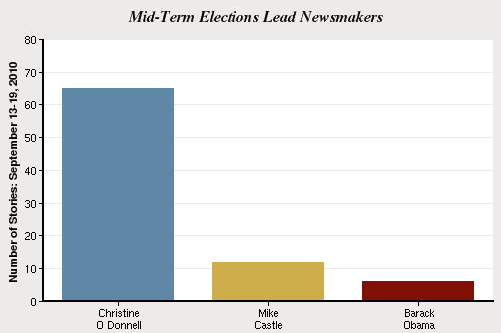 Christine O’Donnell, the marketing consultant who entered the Delaware Senate race only a month before her upset victory, was the top newsmaker of the week, appearing in 7% of all stories studied.  (To be a lead newsmaker, someone must be featured in at least 50% of a story).

In addition, O’Donnell was the central figure in almost one-hird (32%) of all the stories focused on the mid-term elections. (Her opponent, Mike Castle, was the lead newsmaker in only 6% of them).

At No. 2 for the week was Barack Obama, the focus of just 4% of stories. It was the first week since July 19-25 that Obama was not the top newsmaker. (That week, it was Shirley Sherrod, the Department of Agriculture employee who became a flashpoint in the debate about race when an edited video appeared to show her admitting she had not helped a white farmer to the full extent of her ability).

Sarah Shourd, the hiker freed by the Iranian government, was the No. 3 newsmaker in 2% of stories last week. Shourd issued public remarks upon her release which drew media coverage.

Behind Shourd was Pope Benedict XVI, whose visit to Great Britain was followed by the media, which covered both his remarks and the public’s response, including some protests. Benedict was the focus of 2% of stories.

Finally, also at 2%, was Elizabeth Warren, the newly appointed advisor to President Obama who will help establish a new consumer protection agency. Warren’s appointment became controversial once some critics charged that it was a way of placing Warren as the de facto head of the agency while bypassing the usual Senate confirmation route.

Political Rhetoric and a Dramatic Rescue Lead the News