Controversies related to Muslim-Americans—one sparked by a Florida pastor’s plans to burn the Koran and another by a proposal to build an Islamic community center blocks from ground zero—topped the news last week as the country marked the ninth anniversary of the Sept. 11, 2001 attacks.

Plans by Terry Jones, the pastor of a small church in Gainesville, Fla., to mark the Sept. 11 anniversary by burning the Muslim holy book sparked outrage and prompted condemnation by everyone from Gen. David Petraeus to Sarah Palin. Jones eventually relented, but the controversy, and other signs of anti-Muslim sentiment, represented the No. 2 story for the week of Sept. 6-12, filling 15% of the newshole, according to the Pew Research Center’s Project for Excellence in Journalism. Liberal talk show hosts on radio and cable took a particular interest in the topic.

When combined with the No. 4 story (4%), the furor over a planned Muslim community center and mosque near the World Trade Center site, the two stories accounted for nearly a fifth of the newshole last week, according to PEJ’s News Coverage Index, which calculates the column inches and airtime devoted to stories in a broad sample of news media.

Indeed, attention to those hot button issues concerning Islam almost completely overshadowed coverage of the Sept. 11 commemorations themselves, which accounted for only 2% of the newshole.

The sputtering economic recovery and proposals to revive it remained the single largest story of the week, accounting for 17% of the newshole. Proposals by President Obama to extend tax cuts for the middle-class as well as spending more money on road building and other infrastructure projects drove the coverage. Stubbornly high levels of unemployment and other economic news also generated headlines.

Closely tied to the economy are the political fortunes of Democrats and Republicans in the upcoming mid-term elections, a subject that garnered 12% of the newshole as the No. 3 story last week. Driving the narrative were predictions that the Democrats will suffer at the polls and possibly lose control of one or both chambers of Congress.

Rounding out the top five news topics were stories related to the Obama Administration. These included speculation that chief of staff Rahm Emanuel might leave to run for mayor of Chicago in 2011, as well as discussions of Obama’s leadership. Those subjects represented 3% of the newshole.

Islam in the News

The two stories related to Islam in America dominated the headlines last week, though the amount and tone of coverage varied by media sector and ideology.

Pastor Terry Jones’ plan to burn the Koran and other signs of anti-Muslim sentiment generated the most attention on television where it was the No. 1 story in both cable news  (24% of the airtime studied) and broadcast network news (21%).  Online, the story was No. 2, with 12% of the newshole, while it was No. 4 (at 10%) on radio and No. 3 (8%) in the newspaper sample.

Jones, the clear focal point and lightning rod in the coverage, was a lead newsmaker in almost half of the stories about the Koran controversy.

Coverage of the mosque debate was, at 4% of the overall newshole last week, down from a peak of 15% the week of August 16-22 when Obama defended the right of the developers to build the center. Last week it was the fourth most-covered story in PEJ’s cable news sample (at 8%), the fifth-most covered in the radio sample (6%), and sixth in network TV (4%). It was not among the biggest stories in the newspaper sample, which is limited to front-page stories.

Coverage of the two controversies also illustrates the different news agendas of the ideological radio and cable talk hosts. While the conservative hosts last week dedicated modestly more coverage to the mosque story than their liberal counterparts, liberal talkers devoted about four times as much attention to the Koran burning saga as the conservative hosts.

The coverage last week made it very clear which subject each side was most interested in discussing. 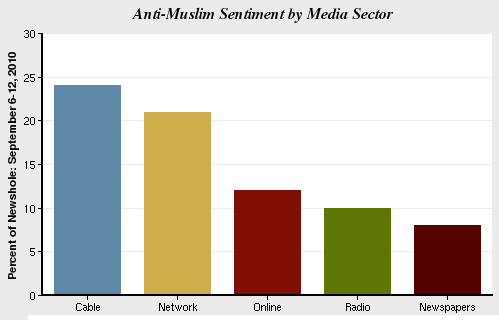 For example, MSNBC’s liberal Keith Olbermann led his broadcast on Tuesday, Sept. 7 with the Jones story. He began with a roundup of events, including clips of Petraeus and the Pentagon spokesman saying the Koran burning would put American service members at risk. He then turned to an in-studio interview with the head of a group that represents veterans of the Iraq and Afghanistan wars.

Former Democratic National Committee chairman and presidential candidate Howard Dean also said that the reluctance by Republicans to criticize Jones was an illustration of a “hate wing” of the party dominated by talk show hosts.

That same night, conservative Fox host Sean Hannity was about halfway through his show before he turned his attention to what he referred to as the “ground zero mosque” controversy. His guests included Abdur-Rahman Muhammad, a former Imam who had written a piece for the New York Daily News in which he asserted that the success of Muslims in America proves they are not being oppressed.

The fact that a mosque is likely to be built near ground zero proves that America does not suffer from “Islamophobia,” he said. “No one is going to stop it from being built. The law will protect them,” he said. Jones’ Koran-burning plan did not come up in that segment.

Later in the week, on Sept. 10, Hannity told his viewers: “I disagree with the pastor, I think it’s unnecessarily provocative.”

On his radio program on Sept. 10, Rush Limbaugh, who said he attended high school with Jones but didn’t know him well, dismissed the pastor as “a fringe figure.”

“Nobody would have ever heard of this until the media elevated it,” Limbaugh said.

Transitioning from the Koran to the ground zero story, Limbaugh criticized Obama for saying he was offended by Jones’ plan, but for not expressing similar opposition to “a mosque backed by an imam who supports terrorist groups such as Hamas.” Critics have complained that Feisal Abdul Rauf, the Iman behind the New York Islamic center, has been reluctant to condemn Hamas, which governs the Gaza Strip and has been linked to terrorism.

The Economy and Politics

Driving the narrative was a package of proposals by Obama to spend more money on infrastructure while cutting taxes on some businesses that invest in new plants. His plan—which  which Democrats pointedly declined to call “stimulus”—accounted for more than a third of the economic coverage during the week, which was often infused with heavy doses of political context.

The Wall Street Journal on Sept. 9, for example, described an Obama speech in Ohio as “part mea culpa, part policy address but mainly red meat for a Democratic base that party officials fear will sleep through the Nov. 2 vote.”

On the CBS Evening News, fill-in anchor Russ Mitchell introduced a story about Obama’s latest economic proposals by noting his electoral troubles. “With polls showing his party struggling, President Obama went on the road this week beginning a new push to reclaim the economic debate.”

Later in the broadcast, senior political correspondent Jeff Greenfield said he doubted the plan, no matter how well intended, would boost the Democrats’ standing. “It’s a tough road for the president.”

Just how tough a road it will be was the subject of much of the political reporting during the week.

Stories about the mid-term elections accounted for another 12% of the total newshole for the week and the topic was among the top three in every media sector. Cable TV news gave it the greatest share of its coverage—22% of the airtime studied

Many of the stories focused on the president’s sagging poll numbers and the implications for his party.

Possible changes in the president’s staff, along with stories about his leadership, dominated coverage of his administration, which was the No. 5 story last week (3% of the newshole). Chief among these was an announcement by Chicago’s long-time mayor, Richard Daley, that he would not run for re-election. This prompted speculation that Obama’s chief of staff and fellow Chicagoan Rahm Emanuel might seek the job. Neither Emanuel or Obama sought to dampen the speculation. In another personnel story, Obama appointed Austan Goolsbee to chair the Council of Economic Advisors. 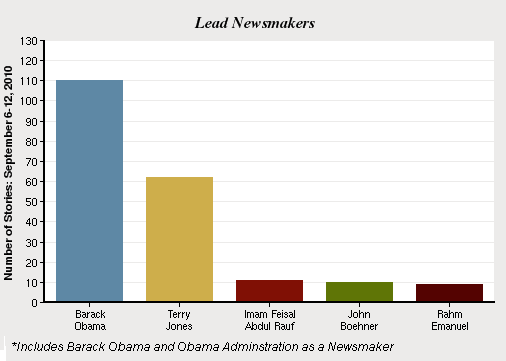 President Obama again topped the list of lead newsmakers from Sept. 6-12, at 11% of the stories, up from 8% the previous week—a testament to a surge in public appearances and interviews. (To be a lead newsmaker, someone must be featured in at least 50% of a story.)

Coming in at No. 2, leading in 6% of the stories, was Terry Jones, the Florida pastor who organized but then canceled a “Burn a Koran day.” The Imam behind the proposed New York Islamic Center, Feisal Abdul Rauf, was No. 3, with 1%.

Two Beltway political figures rounded out the top five roster. Republican House Minority Leader John Boehner—who was singled out for criticism in an Obama speech about the economy—was No. 4, at 1%. Obama chief of staff Rahm Emanuel, rumored to be headed to his native Chicago for a mayoral bid, was next, also at 1%.