Despite a substantial drop-off in recent coverage, the BP oil spill still generated about twice as much attention as the next biggest story last week. And a variety of subjects—from domestic politics and Afghanistan to the economy and a spy swap—completed the roster of top stories.

The Gulf disaster, at 15% of the newshole, was the top story for the week of July 8-11, according to the Pew Research Center’s Project for Excellence in Journalism. That represents the same level of coverage as the previous week when it was also No. 1. But for a story that accounted for 44% of the weekly newshole as recently as June 14-20, the trend of significantly diminished coverage is evident.

Some drama returned to the Gulf spill media narrative at the end of the week when well owner BP began the installation of a new containment device. But much of the week’s coverage was an accumulation of enterprise and color pieces rather than a single dominant story line.

The week’s No. 2 story was the 2010 mid-term elections (7% of the newshole) as pundits and commentators tried to glean meaning from poll results that seemed to bring bad tidings for the Democrats.  Some of coverage also examined hotly contested state races in California and Ohio.

The economy was next (also 7%), with coverage fueled by the release of new—and mixed—economic data and a late-week surge in stock prices.  Analysts debated whether the nation was facing the prospect of a “double dip” recession.

The June 27 arrest of 10 Russian spies in the U.S. resulted last week in a prisoner exchange on an airport tarmac in Vienna, a familiar backdrop for a cloak-and-dagger rendezvous.  Many media outlets took the opportunity to revive past espionage cases and compare the incident to the murky days of the Cold War when the United States and Soviet Union fielded networks of secret agents. The story accounted for 6% of the newshole during the week.

Rounding out the top five stories (at 6%) was the war in Afghanistan, fueled by debate over American strategy and Gen. David Petraeus’ arrival in Afghanistan to take command of NATO forces following the firing of Gen. Stanley McChrystal.

Though not a top-five story, the LeBron James drama—which included a controversial ESPN prime-time special during which the NBA free agent announced he was joining the Miami Heat—did finish at No. 9 (at 3%).  It also made the basketball superstar the second-biggest newsmaker of the week, behind President Obama.

At 15% of the newshole, BP’s leaking oil well remained the top story in the news agenda.  It was especially prominent on cable news—where it accounted for a quarter of the airtime—and was also the top story on network news (18%) and online news (12%).

So far this year, the oil spill represents the second-biggest story with 12% of the newshole, topping the health-care reform debate (8%). Only the economy, at 14%, has been bigger. But coverage is now significantly down from its peak levels. In the four weeks from May 24-June 20, for example, it filled 38% of the newshole.

Last week, stories about the impact of the spill and efforts to contain it accounted for nearly two-thirds of the coverage, continuing a trend seen in recent weeks where once-hot stories about the culpability of BP or the U.S. government have cooled. And no single event drove the coverage.

Oil showed up on beaches in Texas and Louisiana’s Lake Pontchartrain for the first time, demonstrating that the spill continues to spread. Reporting on that, CNN anchor Campbell Brown termed it “disheartening news in the fight to save the Gulf coast. The battle is going to take a lot longer than anyone could have foreseen.”

With the oil now in Lake Pontchartrain, she said, “oil is now flowing right into the heart of New Orleans.”

The residual effects of Hurricane Alex also temporarily hampered cleanup efforts, kicking up high seas and forcing some boats back to harbor.  And the federal government suffered another setback in its efforts to suspend off-shore oil drilling in the Gulf when an appeals court upheld a lower court that declared the moratorium illegal.

At the end of the week, reports surfaced of measures BP was taking that could stem the flow of oil sooner than many had expected. Preparations were made to install a new, larger cap on the top of the wellhead that engineers said might capture all of the oil.

Other stories looked at fresh angles and demonstrated a level of enterprise that went beyond ascertaining what went wrong and assigning blame. An investigation by the Associated Press, for example, found there are more 27,000 abandoned oil and gas wells in the Gulf that no one is checking on.

“Experts say such wells can repressurize, much like a dormant volcano can awaken. And years of exposure to sea water and underground pressure can cause cementing and piping to corrode and weaken,” the AP reported.

On July 6, The Wall Street Journal  detailed how the Obama Administration, before the April 20 explosion of the BP rig, defended Bush-era off-shore drilling policies in part because the government generates billions of dollars in royalty payments from the industry.

News about the mid-term elections constituted the second-biggest story of the week at 7% of the overall newshole—and led the newspaper sector at 13%.  Last week a Gallup poll was released that showed a decrease in support for Obama among independents. The poll found a 38% approval for his job performance among independents, the lowest of his presidency and down from 56% a year ago.

Analysts and political writers saw danger ahead for Democrats in those figures.

“Of all the problems Democrats face this fall, none may be more challenging than trying to win back the support of independent voters,” the Washington Post reported on July 8. “President Obama has been going backward with independents for more than a year, and the Democrats stand to suffer the effects in the November elections.”

The uncertain state of the economy also accounted for 7% of the newshole last week, much of it focused on whether the recovery was running out of steam. The subject led the radio sector (12%) and was the second most-covered topic in newspapers (9%) in the PEJ sample.

The holiday-shortened week began with follow-up coverage of a report released the previous week that showed anemic job growth and dampened hopes for a robust recovery.

As USATODAY.com reported on July 7: “Stocks have fallen for more than two months following a stream of economic reports that haven’t met forecasts. The numbers indicate that the economy is growing, though not as fast as investors had hoped earlier this year.”

By the end of the week, however, the news brightened somewhat when the government reported a decline in new claims for unemployment benefits and stocks surged. A story on NPR’s July 8 All Things followed that news with an account of Obama at a campaign-style appearance at an electric car factory in Kansas City, Mo. as he tried to stress the positive: “We’ve got a long way to go, but what is absolutely clear we are moving in the right direction.”

A high-profile swap of spies between the United States and Russia was the No. 4 story, at 6% of the newshole. The incident began June 27 when agents arrested 10 people living seemly quiet lives in suburban America. Last week, the 10 pled guilty to conspiracy and were sentenced to time served if they agreed to leave the country.

Within hours they were flown to Vienna and exchanged for four people who had been imprisoned in Russia for spying. The case had clear overtones of the spy vs. spy drama that once marked U.S.-Soviet relations, which the media was quick to point out.

As the Wall Street Journal noted on WSJ.com on July 7:  “A swap deal would be the first since the end of the Cold War two decades ago. Before that, Moscow and Washington periodically exchanged captured spies, such as in 1962, when captured U.S. Air Force Pilot F. Gary Powers was swapped for Soviet spy Rudolf Abel. Later, the Soviet government began exchanging dissidents for its agents captured in the West.”

The story quoted a former Russian ambassador, Yuri Ryzhov, who said "We’re rolling back the clock…It’s the 1970s now."

Some questions about NATO strategy in Afghanistan and the arrival of Gen. David Petraeus there helped push the war into fifth place among the biggest stories of the week (at 6% of the newshole). The debate was prompted by a spike in violence in the Marjah region that raised concerns about the success of the surge there, and whether a similar strategy will work elsewhere in the country. 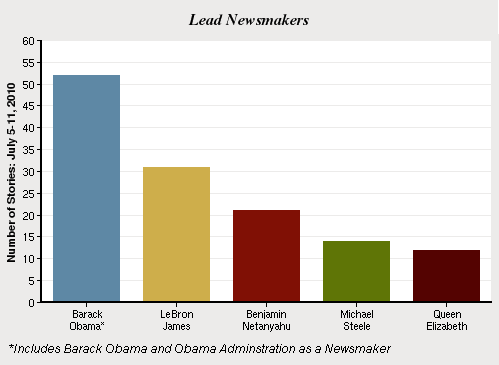 President Obama and his administration were the lead newsmakers in 5% of the stories sampled by PEJ last week. (To be a lead newsmaker a person must be referred to in at least 50% of the story). That was down slightly from 6% the previous week and represents a relatively modest level of coverage for the chief executive.

Coming in at No. 2 (at 3%) was the erstwhile Cleveland Cavalier LeBron James, whose highly public decision to play for the NBA’s Miami Heat next season was the subject of an ESPN special. Both the special and James’ announcement created something of a backlash among many sports writers and fans.

Israeli Prime Minister Benjamin Netanyahu was the No. 3 newsmaker (2%). He was featured in a number of stories about his July 6 meeting with Obama and an apparent warming trend in relations between the two men and their countries. Netanyahu also announced an easing of Israel’s blockade of the Gaza strip.

Michael Steele, the Republican National Committee chairman, was the fourth-biggest newsmaker. He was the lead newsmaker in 2% of the stories sampled, many of them about his declaration that the Afghanistan war was Obama’s, which provoked criticism from his own party.  Rounding out the top five was British Queen Elizabeth (1%), who briefly visited the United States last week and addressed the United Nations.