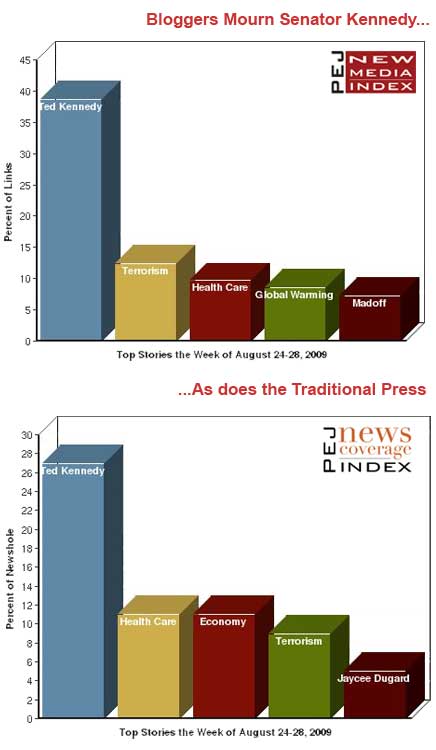 The blogosphere last week was even more devoted to the death of Senator Ted Kennedy than the mainstream press. And in a sign that social media is not all twenty-somethings whose political memory dates back only to the mid-90s, the posts were filled with personal tributes and remembrances-from both sides of the ideological spectrum.

The death of the long-time senator received 38.7% of the links in blogs, according to the New Media Index from the Pew Research Center’s Project for Excellence in Journalism. This outpaced the 27% of the mainstream media newshole devoted to Kennedy, according to PEJ’S News Coverage Index, and made it the biggest weekly story in blogs since the Iranian elections the week of June 15th-19th .

The emphasis in the blogs and mainstream press was also quite different. Coverage in the mainstream media ranged from the logistics of the memorial and funeral services to retrospectives on the senator’s public accomplishments to his family history and personal trials.

But in the blogs, postings were predominately about sharing emotions and memories.

Many bloggers, linking primarily to CNN and Washington Post reports, offered thoughts on how Senator Kennedy’s legacy and life affected them as individuals.  Even among those who strongly opposed the Senator’s politics, his death brought a moment of respectful reflection.  Together, the postings created a sense of collective grief and tribute, demonstrating how this medium can be both intensely personal and public.

The second most popular story in the blogs was about Attorney General Eric Holder’s announcement that he was appointing a special prosecutor to investigate the possible use of torture by the CIA.  This story garnered 12.4% of links in blogs. (It came in fourth in PEJ’s News Coverage Index, at  9% of the newshole.)

Coming in third in the blogs was the healthcare debate at 9.8%, in the mainstream media it was the second biggest story at 11%.

On Twitter, the death of Senator Kennedy ranked second, at 11.5% of the tweets with links. As we’ve seen in past weeks, Twitter, when linking to news stories, is less used for posting personal views and beliefs than it is for passing along information.  Reflecting that tendency, the top subject, at 15.7%, was once again a technology story that could directly affect the Twitter community.

It was a story from Cnet news that discussed a proposed U.S. Senate bill which internet companies and civil liberties groups allege would give the President the power to disconnect any computers or servers and take control of any network in an emergency.

The Death of Ted Kennedy 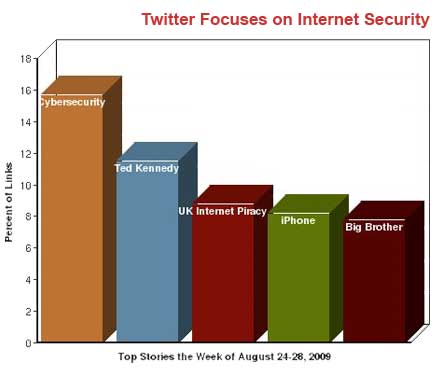 In the blogs, the majority of reactions to Ted Kennedy’s passing were ones of sincere loss and remembrance.  My PR Feed writes about Ted Kennedy’s ability to survive a political crisis: "He will always be remembered as the Lion of the Senate, and perhaps the last member of Camelot, but his ability to survive a political crisis will always define his legacy."

Some of those on the other side of the aisle took a moment to remember Ted Kennedy without criticism.  "If politics means that anyone who disagrees with you is either stupid or evil, then someone like me should celebrate his death," writes Michael Sonby on his LiveJournal blog, "But politics shouldn’t be that way. So we should celebrate his life, and remember him well."

One popular post criticized not Senator Kennedy, but the media’s coverage of his death. "I found myself vacillating on how to treat Teddy in death because of my contempt for him while he was alive," writes Blank Slate, "Most of my venom, instead, has been directed at the glowing obituaries that mention his most tragic act as nothing more than a political misstep for him…"

Many of the posts were short and reflected a simple sentiment of loss. "My sincerest thoughts go out to the family of Senator Edward Kennedy who passed away Tuesday night after losing a battle the with brain cancer," writes Jess on GovGab "After spending five decades in Congress, it’s hard not to be a little bit amazed by the length of his tenure, no matter what side of the political spectrum you land on."

In the days before the death of Senator Kennedy, the top story in the blogs was about Attorney General Eric Holder’s appointment of a special prosecutor to investigate the CIA for the alleged use of torture.  Attention then turned to the loss of Kennedy, but for the week this story was still ranked second with 12.4% of the links.

The reaction from the blogs was predictably along partisan lines.  Some on the right saw this as a chink in President Obama’s armor with many insinuating (and some flatly stating) that it was an effort to divert attention from the healthcare debate,  "For all Obama’s rhetoric about ‘looking forward’ and ‘not looking back,’ his Attorney General Eric Holder’s decision has just accomplished the opposite," writes Andrew Berman on his blog Berman Post, ". . .  this could present another problematic discussion regarding if people should take what Obama says seriously as he breaks another pledge."

Another common attack from the right was that torture is necessary and the investigations are therefore pointless. "These CIA interrogators were getting information that helped save an untold number of lives here in the USA and around the world.  But they had to get their hands dirty to do it," writes By All that is Necessary.

From the left the move was met mostly with praise, but also with a smattering of disappointment in Holder for not taking a stronger position in the investigations. "Let’s  be clear: it is good that Holder has decided to take a more serious look at the use of torture during the Bush-Cheney years." Writes John Nichols of The Beat, a blog at The Nation magazine, "But he has done so in a disturbingly cautious manner that is described by the American Civil Liberties Union as ‘anemic’."

For the fourth week in a row the most watched YouTube video was of a healthcare town hall meeting.  In this clip a Marine veteran makes a statement to Congressman Brian Baird (a Democrat from Washington state) equating Nancy Pelosi and the health care plan to the Nazis.

The second most watched video was of Kate Gosselin, the reality TV show star of Jon and Kate Plus 8 fame, speaking with Larry King about her estranged husband Jon. She explains that she thinks Jon is a good father despite their marital issues.

The ” target=”_blank” rel=”noopener noreferrer”>third most watched video is allegedly a video of people breaking into Lindsay Lohan’s house.

Bloggers Track the Nuances of the Health Care Debate

In the Blogosphere, the Walkman and the Pitchman Supplant Michael Jackson