In a crowded and diverse news week, the economic crisis was the No. 1 subject, even as it generated the lowest weekly coverage for any lead story since 2007.

But it was the election in Iran that drove narrative late last week. And as the country continued to split over the disputed voting results, it set the stage to possibly emerge as the next international mega-story.

The numbers also cast into striking relief the degree to which Iran barely registers otherwise on the media radar screen, despite the political rhetoric involving the nation that once held Americans hostage and played a key role in the history of Islamic fundamentalism.

From June 8-14, the U.S. financial crisis accounted for 13% of the newshole, according to the Pew Research Center’s Project for Excellence in Journalism. That marks the first time in 20 months that the leading story for a week generated so little attention. The last time it occurred was the week of October 14-19, 2007, when the still-young presidential campaign was the top story, but filled only 11% of the newshole.

The second-biggest story last week was a dramatic event that tapped into a larger ideological issue, according to PEJ’s weekly News Coverage Index. The June 10 shooting at the Holocaust museum, allegedly by a white supremacist, accounted for 11% of the coverage. It also re-ignited a debate about a Homeland Security warning of a possible spike in right-wing extremism.

The third- and fifth-biggest stories involved domestic concerns. The intensifying battle to shape health care legislation was the third biggest story of the week, filling 7% of the newshole, while coverage of the floundering U.S. auto industry was No. 5, at 6%.

In many ways, however, the most dynamic and fluid story of the week was the hotly contested June 12 election in Iran. It was the No. 4 story of the week overall, filling 6% of the newshole. The battle between hard-line President Mahmoud Ahmadinejad and his more moderate challenger Mir Hussein Moussavi ended the week with the incumbent declared the winner, both sides claiming victory and violent protests spilling onto the streets.

It also seemed to catch much of the American media by surprise. From Friday through Sunday (June 12-14), that election dominated coverage in the U.S. media, with the predominant narrative being that late momentum was with Moussavi.

The level of last week’s coverage suggests how significant the election might be for U.S. interests. Despite its emergence as a crucial power in the volatile Mideast, its worrisome nuclear program and its hostile relationship with the U.S, Iran does not usually generate much press attention.

From the beginning of this year until the voting, news relating to Iran ranked as the twenty-sixth biggest story of 2009, according to PEJ’s News Coverage Index. By way of comparison, Iran attracted less than half the attention devoted to the threat posed by teenage Somali pirates.

The Vote in Iran: What Happened?

Despite longstanding tensions with the U.S. and the growing threat of a military confrontation with Israel, it’s been some time since Iran was a newsmaker of note.

In 2007, news concerning Iran was the second biggest international story of the year, behind only the war in Iraq. Even then, coverage of that nation (2% of the newshole) was relatively modest. What’s more, even that amount of coverage could be attributed largely to two major, but short-lived events—Iran’s temporary detention of British sailors

in the spring and Ahmadinejad’s visit to New York in September that included a contentious appearance at Columbia University.

In 2008, coverage dropped by roughly half, down to 1%. The situation in Iran generated less attention than such overseas events as the Beijing Olympics, the Georgia-Russia war and the Mumbai terror attacks.

That pattern had continued this year. Until the election, coverage of Iran never exceeded 1% of the newshole in any single week in 2009.

At the beginning of last week, even the election wasn’t generating much attention. Once voting day arrived, coverage increased dramatically, accounting for 19% of the newshole from June 12-14. And that coincided with a clear, if not unequivocal narrative—that Moussavi might be on the verge of an upset as reports poured in of large, passionate, youth-driven rallies on his behalf.

“In Iran, a Real Race, and Talk of a Sea Change” read the headline on a June 12 New York Times story that talked of a “vast opposition movement” that was “flooding the streets of Iran’s major cities with cheering, green-clad supporters of Mir Hussein Moussavi.”

On the June 11 NBC newscast, anchor Brian Williams asserted that, “Voters in Iran may be hours away from making history. This is the eve of an election in Iran that may change that country in a big way. President Ahmadinejad…may be in the midst of a slowly building, slowly burning uprising against him.” Those sentiments were echoed by correspondent Richard Engel, who added that “many here [are] describing this as a possible turning point” with an outpouring of young voters that “took this country very much by surprise.”

By week’s end that storyline gave way to the confusion surrounding a controversial and contested Ahmadinejad victory. Officially, the incumbent was declared the victor by a solid majority (almost 63%). Amid charges of vote fraud, many Moussavi supporters took to the streets, triggering violent encounters with the authorities.

As the June 14 Washington Post noted, the Obama administration, which would have likely welcomed a Moussavi victory, was unsure of what to make of the results. The story quoted Secretary of State Hillary Clinton’s statement that, “We are monitoring the situation as it unfolds in Ian, but we, like the rest of the world, are waiting and watching to see what the Iranian people decide.”

Having finally gotten the attention of the U.S. media, will Iran stay in the headlines for more than a few days? The answer may hinge on whether internal unrest grows in the coming days and on any further determination about the legitimacy of the results. Coverage of Iran has tended to be episodic and inconsistent, and last week’s tumult could yet prove to be another “one-week wonder” in the U.S. media.

At 13% of the newshole from June 8-14, coverage of the economic crisis increased somewhat from the previous two weeks (when it filled 11% and 9%). But those numbers represent only about one-third of the attention the economy was generating earlier in the year and last week was the first time the economy led the news agenda since May 4-10. 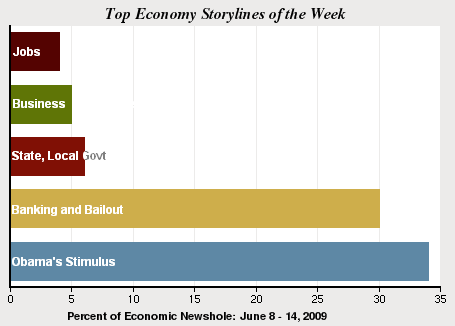 Specifically, the financial meltdown was the No. 1 story in only one media sector last week, filling 26% of the front-coverage in newspapers. That narrative was largely driven by a debate over how many jobs were being created by the stimulus package and the news that some big banks were being allowed to pay back their federal bailouts. But in four of the five  media sectors—online, network news, cable news, and radio—the subject accounted for less than 10% of the newshole.

The week’s second-biggest story (11%) was the shooting that killed a security guard at Holocaust Museum in Washington D.C. The attack ended up with the alleged perpetrator, 88-year-old James von Brunn, badly wounded in the hospital. The cable news channels devoted the most coverage to the story (20% of the airtime studied) and a good portion of that was live spot coverage as events were unfolding on June 10.

One week earlier, another crime with ideological overtones, the killing of Dr. George Tiller by an alleged anti-abortion activist, filled 8% of the newshole and re-ignited a debate over the highly polarizing abortion issue. (From June 8-14, coverage of the Tiller case dropped to 1%.) The von Brunn attack re-opened a discussion about a Homeland Security report released in April warning that right-wing extremists could be trying to recruit war veterans for acts of violence. That report generated harsh criticism from some conservatives and veterans groups—and Homeland Security Secretary Janet Napolitano subsequently apologized for offending veterans.

But some liberal commentators contended last week that the Tiller and von Brunn attacks vindicated that report. “For the second time in 11 days, the kind of right-wing, religious-based domestic terrorism, about which the Department of Homeland Security warned and for which that department was vilified and accused of playing politics, has resulted in the death of an American,” declared MSNBC host Keith Olbermann.

The No. 3 story (at 7%) was coverage of the health care debate as legislation began percolating on Capitol Hill and Barack Obama took to the road to try and sell a health care overhaul. That marks the highest level of coverage to this topic since PEJ began the News Coverage Index in January 2007, narrowly exceeding the 6% devoted to an Obama White House health care summit the week of May 11-17, 2009.

Coverage of the U.S. auto industry, (No. 5 at 6%) was down by more than half from 13% the previous week when the GM bankruptcy drove the storyline. Last week, the action moved to the courtroom where a federal judge approved Chrylser’s closing of hundreds of dealerships and the Supreme Court cleared the way for Chrysler’s sale to Fiat after some petitioners tried to block the deal. 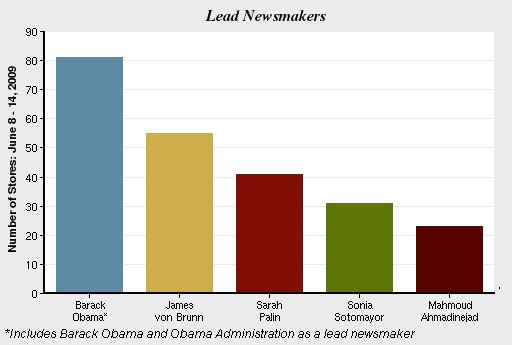 In a week during which the U.S. government was not a major actor in the top stories, Barack Obama generated his lowest level of coverage since he was inaugurated. He was still the top figure, but was the lead newsmaker—meaning at least 50% of a story was about him—in only 6% of the week’s stories.

Close behind, at 4%, was James von Brunn, the man accused of the Holocaust Museum attack. Next was the former vice-presidential candidate, Alaska Governor Sarah Palin (3%), who made a media push in Washington and New York and became embroiled in a dispute with David Letterman after the late-night host made a joke about Palin’s daughter that many deemed inappropriate.

The fourth-biggest newsmaker was Supreme Court nominee Sonia Sotomayor (2%), who made the top-five list for the third week in a row. She, finally, was followed, also at 2%, by Mahmoud Ahmadinejad, the winner, albeit disputed, of the Iranian election who may be best known for his incendiary rhetoric and denial of the Holocaust.