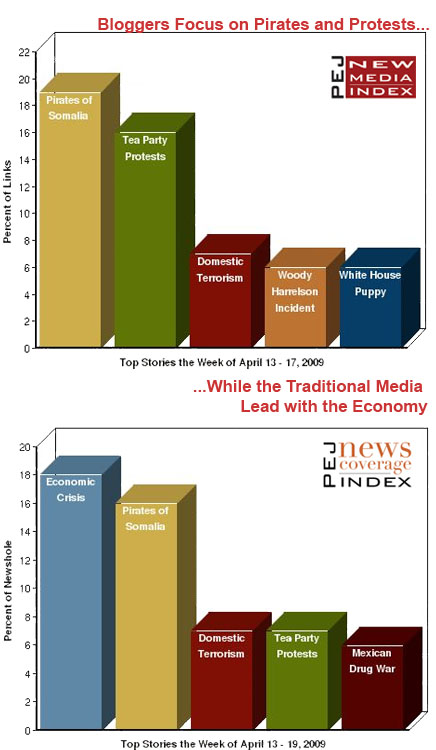 Unlike many previous weeks, the two stories generating the most interest in the blogosphere were among those that also received significant attention in the traditional press. Both the pirate hostage saga and the Tea Parties spurred passionate and visceral online commentary, with one story producing unity and the other generating sharp discord.

Fully 19% of the links by blogs and social media sites from April 13-17 focused on the dramatic end to the standoff between the Somali pirates and American Navy, according to the New Media Index from the Pew Research Center’s Project for Excellence in Journalism. With the successful rescue of Captain Richard Phillips, most bloggers expressed gratitude and pride in the performance of the U.S. military.

Another 16% of the links centered on the April 15 protests around the country, generally aimed at President Obama’s economic policies and modeled after the Boston Tea Party of 1773.  The event sparked enormous debate online with some bitter disagreement over the meaning and motives behind the rallies.

The third largest story (at 7%) was about efforts by the U.S. government to defend against terrorist attacks. Most of the debate revolved around an April 15 New York Times report that claimed the National Security Agency went beyond legal limits imposed by Congress in intercepting e-mails and phone calls of U.S. citizens.

Rounding out the top five were two stories far less serious in nature.

The fourth-largest linked-to story last week (at 6%) was a CNN report about a physical altercation at a New York airport between actor Woody Harrelson and a cameraman. Fresh from shooting a movie in which he was attacked by zombies, the actor said he mistook the photographer for yet another monster.

Fifth, also at 6%, was links to a Washington Post story about Bo, the Portuguese Water Dog that became the newest member of the Obama family last week. Once the dog’s identity was leaked, the pet was thrust into the national spotlight.

In the traditional media, the economic crisis was the No. 1 story for the 10th time in the last 11 weeks. The next three top stories in the traditional media, however, were also the leading stories in the blogosphere: the Somali pirate saga, efforts to prevent terrorism (focused on the release of memos detailing harsh interrogation and controversial interrogation techniques) and the politics behind the Tea Party protests.

These are some of the findings of the PEJ’s New Media Index for the week of April 13-17. The index is an effort to monitor the content appearing in new media platforms. The biggest element of this Index is what appears in the more than 100 million blogs and other social media web pages concerned with national news and public affairs tracked by two monitoring sites, Technorati and Icerocket. Both track the commentary online by identifying what news stories bloggers and other websites link to. Each weekday, PEJ captures the top linked-to stories and analyzes their content. It then compares those findings with the results of its weekly analysis of more mainstream media, the weekly News Coverage Index. The Project also tracks the most popular news videos on YouTube each week.

When news spread that U.S. Navy snipers shot and killed three pirates holding American Captain Richard Phillips hostage, the general reaction throughout the Web was one of American pride and satisfaction.

"THIS is how you wanted the hijacking to end. No win for pirates and no harm to the hostages," applauded A Time to Choose. "All is well that ends well."

"The Navy acted in the best traditions of the U.S. military, and Phillips persevered through a trying and frightening few days to survive the incident," declared essenceofamerica’s blog. "This is what makes our country so great. This is why the U.S. is to be feared and respected. This is how a powerful nation was born and how it continues to prosper."

"TV personalities like Britt Hume complained that Obama wasn’t stepping up and stating his position while others tried to paint the administration as weak when it came to the security of the U.S. and its citizens," wrote gedblog. "Now those on the right who bet against America and our President are trying to hem and haw and find any possible excuse for doing what they did. They should all be taken to task for their deplorable behavior."

The few political differences that emerged after the pirate standoff were nothing compared to the heated arguments that surrounded the April 15 Tea Party protests. Much of the online discussion reflected a partisan split also prominent on cable news, with Fox News Channel commentators frequently supporting the protests while MSNBC hosts ridiculed them. The blogosphere coverage, however, was different from the mainstream media in one key respect. Some of the protest participants posted their own first-hand experiences along with photos and videos.

"It was a rather festive event (American flags, witty signs frequent chants of ‘U.S.A.’)," recounted Denny Hartford of Vital Signs who attended a rally in Nebraska. "And it was also satisfying to be a part of what was a national protest event against the irresponsible, even irrational, economic policies that are leading our nation into great peril."

Most of the links to news articles about the Tea Parties were aimed at two newspaper columns critical of the movement. Marc Cooper of the Los Angeles Times wondered if the so-called "common folks" were really angry because of the marginal tax rate rising 3% for millionaires. Paul Krugman of the New York Times argued that some of the charges voiced at the protests-that Obama is promoting socialism and was not born in the U.S.-have made the Republican Party embarrassing to watch.

Conservatives balked at the columns.

"On reading Cooper’s article, the first thing that struck me was his condescending tone of ridicule towards anyone who might disagree with him on the issue: his need to downplay the populism of the tea party sentiments and to recast participants as the lunatic fringe of a party that has lost its way rather than representing a popular groundswell of protest," responded Neo-Neocon.

"This is the real mood of the country, and the main stream media is doing its very best to try to hide it," proclaimed Mr. Punky Kitten, "…I weep for the future of America unless patriots like this can continue a great grass roots effort to take back government from the current crop of socialist legislators, and perhaps the MSM [mainstream media] will see the light."*

Liberal bloggers highlighted the columnists’ criticisms in order to downplay the significance of the protests.

"These tea parties on Tax Day reveal the hypocrisy, ignorance, and insanity of some Americans," declared Buck Denton at the Conservation Report. "Where were these tea parties during the Bush II spending spree? Not only did former President George W. Bush spend the surplus that former President Bill Clinton enjoyed, but he also sunk the deficit to new lows."

"I really don’t understand what the right is protesting about," echoed demkid at the Bright Coast. "I think it’s that they have absolutely no direction and need these gatherings to collectively cry about their weakening influence in American politics."

The most watched video last week was of news being made on a cable news show. On the April 13 edition of Glen Beck’s program on the Fox News Channel, Columbia Professor David Buckner was discussing the country’s economic troubles. During the interview, Buckner fainted and Glenn Beck quickly cut to commercial. According to various reports, Beck said Buckner was "doing fine" and after Buckner offered the host an apology, Beck responded, "Are you kidding me? The ratings will go through the roof!"