For the second week in a row, the economic crisis only narrowly edged out Somali pirates as the top story in what is becoming a more diverse news landscape than earlier in the year.

With media attention to the financial meltdown falling to less than 50% of its level a month ago, an obvious question emerges: As the news about the economy gets modestly better, and the torrent of grim news slows, is the story attracting less attention than it did when things seemed more dire?

For the week of April 13-19, the financial crisis accounted for 18% of the newshole, according to the Pew Research Center’s Project for Excellence in Journalism. While that’s a small increase over the previous week (15%), it marks the third in a row when the subject has accounted for less than 20% of the coverage. By contrast, it filled 43% of the newshole in the first two months after Barack Obama’s inauguration.

One effort last week to summarize the state of the economy, a front-page story in the April 15 Washington Post, began with the sentence, “The president and the Federal Reserve chairman voiced cautious optimism yesterday that the economy could be beginning to stabilize.” Perhaps a storyline that ambiguous and tenuous helps explain why the media have diverted their attention to pirates and other events in recent weeks.

Indeed, the economy last week was rivaled by the dramatic story of piracy, hostages and freedom on the high seas. In the days following the April 12 rescue of Captain Richard Phillips, the Somali pirates accounted for 16% of the week’s coverage. And the saga was the top story on both cable news and broadcast network news. The No. 3 story—the war on terror at 7%—was fueled by the disclosure of memos detailing controversial interrogation techniques during the Bush administration.

ved the April 15 tea party protests. But it also proved to be something of a journalistic Rorschach test, generating very different levels and kinds of coverage in different media sectors. In some quarters (most notably the Fox News Channel), the protests were largely treated as an outpouring of grassroots dissatisfaction with tax policy and expanding federal government. In others (most notably MSNBC), they were often dismissed as anti-Obama anger fests centrally orchestrated by Republicans looking for an issue.

And so last week, the tea parties became a vehicle for the ideologically driven arguments that had been a significant part of the earlier media narrative about the stimulus package and Obama’s proposed budget. Recently, as those partisan battles over economic policy have subsided and news from the banking sector has brightened a bit, coverage of the meltdown has plunged.

As has been the case for the last month, the biggest storyline in the economic crisis was the banking and financial sector, at 31% of the newshole. The next biggest components, well back at 12%, included assessments of the recession as well as coverage of non-banking U.S. businesses from Hollywood to General Electric.

It would be hard to characterize the recent coverage of the economy as rosy. But there’s been a noticeable change from the gloom-and-doom narrative that dominated earlier.

On April 13, for instance, there was a double dose of mildly upbeat news on ABC’s evening newscast. First came a story about how stimulus money that allowed Santa Monica, California to buy more buses for public transit had trickled down to create new jobs. That was followed by one more positive note from Wall Street.

“There’s another sign the banking industry could be turning around today,” said anchor Charles Gibson, as he reported on Goldman Sachs’ announcement of a “much-better-than expected” profit of $1.8 billion in the first quarter of the year.

A tone of wary optimism also pervaded this story from the Kansas City Business Journal that was posted on Google News on April 15. “The economy continued to decline in March, but the recession is showing signs it may be bottoming out, according to a report the Federal Reserve Board issued Wednesday…The 10th Federal Reserve District, based in Kansas City, reported tentative signs of a stabilizing economy. The district reported that consumer spending and manufacturing activity fell at a slower pace and that residential real estate activity and the agricultural sector were steady last month.”

Aside from being the No. 1 story overall from April 13-19, the economic crisis was also the top event in newspapers (18% of the newshole), online (23%) and radio (18%).  But there has been a dramatic drop-off in attention to a story that as recently as a month ago looked likely to dominate the 2009 media narrative in much the same way that the presidential election did in 2008.

There are several possible explanations for the decline. In recent weeks there hasn’t been a major new and dramatic Obama initiative—and the ensuing political debate—to match the potency or scale of a $787 billion stimulus or a $3.6 trillion budget proposal.

In addition, the earlier narrative depicting an economy in free fall and conjuring up comparisons to the Great Depression has been mitigated by some signs the crisis may be bottoming out, at least in certain sectors. In this case it’s hard to say that good news is no news. But the absence of bad news may be refining that truism slightly. Signs of an improving economy, however tenuous, are a smaller story than a collapsing economy. 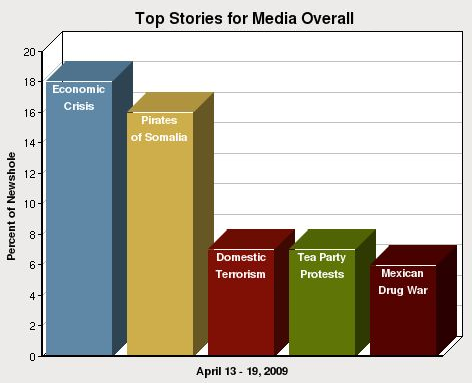 How much and what kind of news one got about the April 15 tea parties depended on the news outlet or platform. The story got minimal play in the two more traditional old-media sectors. It accounted for 1% of the front-page newspaper coverage examined and only 2% of the time studied on the network broadcasts. Conversely, it accounted for 15% of the coverage on radio and 14% on cable—the two platforms with substantial debate and talk show components. Online was in the middle at 6%.

And as was the case during the 2008 election season, the protests revealed large editorial and ideological chasms among the cable channels. Both the Fox News Channel, which leans conservative in prime time, and MSNBC, which tilts liberal, gave the story big play. It accounted for 20% of the Fox newshole last week and 16% on MSNBC. By contrast, CNN devoted 7% of its coverage to the story, which matches the level we found in the media overall.

But the tone on Fox and MSNBC of that coverage was dramatically different. On the April 17 edition of Sean Hannity’s Fox show Republican National Committee Chair Michael Steele began an interview segment by praising the host’s extensive attention to the tea parties. “I want to say you’re [a great American] this week for really putting a light on over 300,000 people out there who stood up for freedom, who stood up for their families and stood up for their communities by saying ‘no more, the line has been drawn in the sand,’” Steele told Hannity.

There was a far more skeptical view offered by MSNBC’s newest host, Ed Schultz, who like Hannity is also a talk radio personality. “Folks what happened in cities across America today was anything but grassroots. These tea parties were filled and fueled with one network,” Schultz said, referring to Fox. “What was the mission today…How many jobs were created today?”

Trying to put matters into perspective, an AFP story that appeared on Yahoo! News declared that, “Critics of President Barack Obama marked national tax day Wednesday with ‘tea party’ protests that Republicans are calling the birth of a grassroots opposition, but Democrats dismiss as a fraud.”

That neatly summed up the opposing positions taken by the prime-time hosts on Fox and MSNBC.

If the tea party phenomenon evoked some debate over newsworthiness, piracy was a storyline many news organizations got their hooks into. Coverage of piracy on the high seas was the No. 2 story from April 13-19, filling 16% of the newshole, marginally up from 14% the previous week. The numerous storylines included a focus on Captain Richard Phillips, who was rescued when Navy sharpshooters killed the three Somali pirates holding him hostage. There was some ideological skirmishing in talk show circles about how much credit, if any, should be given to Obama. And some coverage looked at what happens next in the newest overseas crisis for the administration—a suddenly intensifying battle against piracy.

“America is going after the pirates’ loot,” reported USA Today on April 16. “The Obama administration announced plans Wednesday to freeze assets belonging to the pirates operating off Somalia’s coast, which could make it harder for them to collect million-dollar ransoms until more sweeping diplomatic or military action is taken.”

The third-biggest story last week, (7%) focused on U.S. efforts against terrorism. The biggest news there was the Obama administration’s release of memos documenting what the media have come to call “harsh interrogation techniques”—including waterboarding—used against terror suspects during the Bush administration. That was accompanied by the disclosure that Attorney General Eric Holder does not intend to prosecute the CIA operatives who had been authorized to use those methods.

The week’s fifth-biggest story, at 6% of the newshole, was about the Mexican drug wars. That narrative was driven by Obama’s visit to Mexico and the administration’s selection of a border czar who will tackle everything from drug violence to immigration issues.

As a lead newsmaker in 12% of the stories from April 13-19, Obama was easily the top headline grabber. But that number is down from 15% the previous week and represents a decrease of almost 50% from the week of March 30-April 5 when the President was the focus of U.S. coverage of the G20 summit. 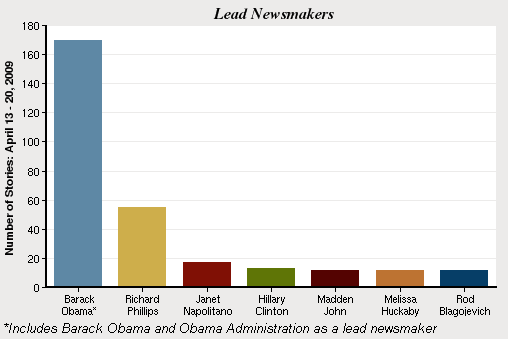 The No. 2 newsmaker, at 4%, was rescued Maersk Alabama Captain Richard Phillips, who exceeded his previous week’s total of 3%. Next was Homeland Security Secretary Janet Napolitano (1%) who became embroiled in controversy after her agency issued a report saying right-wing extremists could be trying to recruit war veterans for acts of violence. No. 4 on the list, also at 1%, was Secretary of State Hillary Clinton

The battle for fifth-leading newsmaker (1%) was a tie between three very different types of celebrities. They included retiring pro football announcer John Madden; Melissa Huckaby, the woman charged in the murder of eight-year old California girl Sandra Cantu; and indicted former Illinois Governor Rod Blagojevich, who reportedly plans to ask a judge to let him to travel to Costa Rica in order to be a contestant on the TV show, “I’m a Celebrity…Get Me Out of Here!”

With Blagojevich, reality is even stranger than reality television.