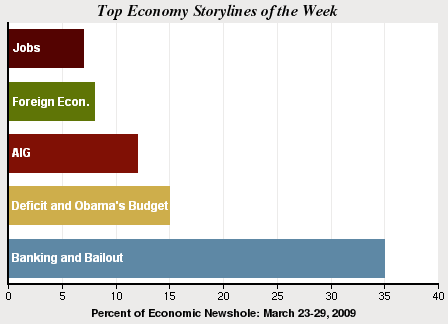 With Treasury Secretary Tim Geithner unveiling a financial sector rescue package and calling for stricter regulation, the economic crisis was once again overwhelmingly the top story last week. It filled 41% of the newshole from March 23-29 as measured by the Pew Research Center’s Project in Excellence. While that represented a drop from the previous week’s coverage (53%), it is in line with the overall level of attention to the crisis (43%) in the two months since Barack Obama was inaugurated. The No. 2 story last week, concerns over Mexican drug smuggling, was about one-seventh as big as the economy.

Geithner’s proposal to clean up the so-called “toxic assets” made him the week’s second-biggest newsmaker, behind only Obama. At a time when public perception and confidence can have a significant impact on the economy, the Treasury Secretary was looking for what golfers call a mulligan—or in more common parlance, a do-over.  Back on February 10, when he first outlined a financial sector bailout proposal, Geithner was widely panned for poor presentation, criticized for a lack of specifics and blamed for a 382-point drop in the Dow that day. (“Geithner Plan Lacks Freshness and Clarity,” declared the Washington Post headline that pretty much summed up the coverage.)

Geithner’s March 23 proposal generated a warmer reception, particularly on Wall Street where the Dow shot up 497 points. “This Time, Geithner’s Plan for Banks Makes Sense,” declared the headline on business writer Joe Nocera’s New York Times column.  Praise was far from unanimous, though, and a Congressional hearing held during the week kept some of the focus on AIG.

One week after the economy story was dominated by anger at AIG, the media demonstrated its ability to leap from one major storyline to another. Coverage of AIG dropped by about 75% to just 12% of the financial coverage. Instead, the top theme was the banking crunch and financial bailout, at 35% of the newshole. That was followed by attention to Obama’s budget proposal (14%) in a week in which the Republicans offered their own alternative sans specifics.

The changing  narratives in the financial meltdown, which has emerged as a pattern in the coverage, reflects the breadth and complexity of an expanding story that now includes, among other things: an overall economic stimulus plan; a financial sector bailout proposal; a housing and mortgage package; and Obama’s budget. On any given week, depending on the focus of the White House, Congress, and Republicans, the center of media attention can and often does shift among them.

Last week, it was Geithner at the center of the narrative.

“In the plan put forward formally by Treasury Secretary Timothy Geithner, the White House aims to thaw the country’s frozen lending markets by tempting private investors into an alliance that might buy up as much as $1 trillion in what are now euphemistically called ‘legacy loans,’” said a March 24 Kansas City Star story assessing the bailout plan. “Doing so creates more risk for the U.S. taxpayer and potentially great bonanzas for private investors. But taxpayers also could profit if it works.”

Much of the coverage quickly moved from the details of the proposal to implications for Geithner. On March 22, Alabama Republican Senator Richard Shelby was harshly critical, telling Fox News that, “He’s going to have to do a 180-degree turnaround, I believe, to be a successful treasury secretary.” Interviewed by CBS on March 25 about Geithner’s bank plan, Shelby’s tone seemed to change somewhat. “We’ll have to wait and see,” he declared. “The devil’s always in the details.”

Al Hunt of Bloomberg News offered a more unequivocal endorsement, writing that “the senseless speculation about whether [Geithner] would step down, which would be devastating for the administration of President Barack Obama, has rattled markets. Much of it is either political posturing or a bank shot at his boss, the president.” 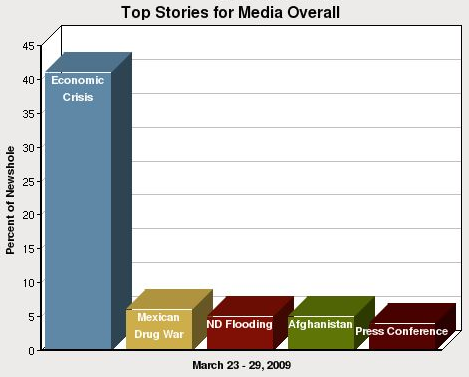 Another significant economic storyline last week revolved around Obama’s $3.6 trillion budget proposal, with Democrats in Congress moving forward on the plan and Republicans beginning to organize in opposition.

“Looking to rebut criticism from President Obama that the GOP is attacking him but not offering proposals of its own, Republican lawmakers released an 18-page outline of an alternative budget that proposes to cut overall government spending except for defense, ban additional spending for bailouts of financial companies, and cut the maximum income tax rate to 25 percent from the current rate of 36 percent,” said the March 27 Washington Post story, which also noted that the Republicans “mocked by Democrats for putting out a document with almost no details or precise figures.”

And while AIG was not the story it had been the week before, it still generated headlines.

Even as he reported that some AIG bonuses were being returned, NBC anchor Brian Williams declared on March 24 that, “The outrage is out there and it’s not going away any time soon.” He then went to correspondent Kelly O’Donnell who reported on the tough questions about their role in the AIG bonuses that Geithner and Federal Reserve Chairman Ben Bernanke faced on Capitol Hill.

But some of last week’s coverage also focused on the darker side of the populist anger at AIG.  A story posted on the ABC News web site on March 27 noted that “some executives there had hired private security firms to protect their homes” and cited an anonymous employee who said some staffers had received “hostile calls at home” while others’ “children have been threatened on their college campuses.”

"They fear every day for their safety," the employee asserted.

Once again, the roster of the week’s top newsmakers was tilted heavily toward administration officials and key players in the economic crisis. Obama was a lead newsmaker in 16% of the stories from March 23-29, up slightly from the previous week (14%). 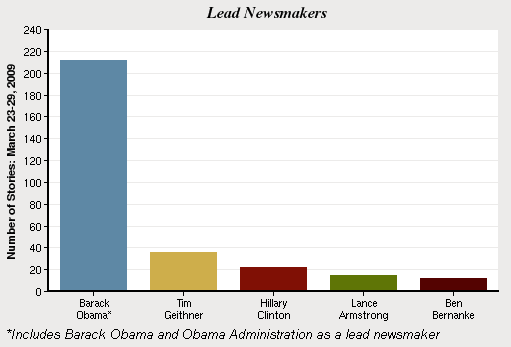 The week’s No. 2 newsmaker was Geithner, who registered in 3% of the stories, his highest level of coverage since the inauguration. Secretary of State Hillary Clinton, who traveled to Mexico last week, was next at 2% followed by cyclist Lance Armstrong (1%), who had surgery for a broken collarbone.  The fifth-biggest newsmaker, also at 1%, was Fed Chair Bernanke.

After the economy, the second-biggest story the week of March 23-29, at 6% of the newshole, was the Mexican drug war. That story was driven by Obama’s plans to beef up U.S. efforts to fight drug trafficking at the border and Clinton’s visit to Mexico where she acknowledged that U.S. enforcement problems and America’s demand for drugs had exacerbated the problem. The No. 3 story (5%) was the Red River flooding that was threatening Fargo North Dakota. That drama generated the most attention on network news (13% of the newshole), the sector that traditionally spends the most time covering natural disasters and severe weather.

The No. 4 story, also at 5%, was Afghanistan—a narrative fueled by the President’s plan for that conflict which includes an increased U.S. presence—a strategy some have compared to his predecessor’s “surge” concept in Iraq. The fifth-biggest story, at 4% was Obama’s March 24 press conference where he tried to instill optimism about the economy, a subject that was the focus of the media questions. The most memorable moment might have been Obama’s sharp retort after CNN’s Ed Henry asked why the President “didn’t go public immediately with…outrage” over the AIG bonuses.

“It took us a couple of days because I like to know what I’m talking about before I speak,” snapped Obama, triggering some chuckles in the room.