Who is Sarah Palin? The question has dominated campaign coverage in the weeks since her nomination as John McCain’s running mate. In the mainstream media at least, the answer has focused almost as much on her family life as on her public record. But despite that focus, and the debate over her beliefs, coverage of her religious background and beliefs has often been a peripheral element in the story. These are among the findings of the Pew Research Center’s Project for Excellence in Journalism and Pew Forum on Religion & Public Life, which examined front-page and lead stories among top print, television, radio and online news media.

The media get personal, but don’t dwell on religion

Since Aug. 29, the day Palin was announced as McCain’s running mate, she has dominated election coverage. According to PEJ’s News Coverage Index, between Aug. 29 and Sept. 15, four of the top 10 storylines focused on her, accounting for 39% of all campaign coverage. 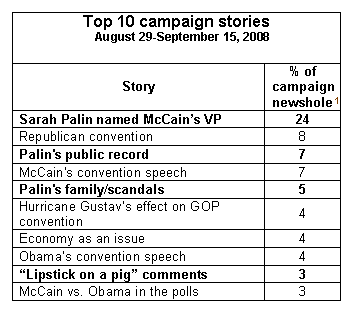 The top story in this period was reactions to her being named as John McCain’s running mate, which garnered 24% of election coverage. Stories about Palin’s family, including her daughter’s pregnancy, made up another 5% of the campaign newshole, while the governor’s public record accounted for 7%. The “lipstick on a pig” skirmish occupied another 3%.

In addition to these storylines, a number of others that speak to the spiritual life and personal beliefs of Gov. Palin have emerged as well, but have not received the lion’s share of attention or top billing among the mainstream press.

Some of these additional stories include: While mayor, Palin was accused of exerting pressure on a Wasilla library to ban books that Palin found morally offensive. Controversial statements about the Jewish people made by a speaker in the pulpit of a church she attends stirred accusations of anti-Semitism. Palin’s support for a creationism curriculum in public schools has sparked debate, as have glimpses into her views on prayer and God’s will in the affairs of the state.

These news stories have raised Palin’s religion, and its implications, as part of her profile, but quite often, in-depth reporting of Palin’s religious biography have only been included as details below the lead. Even the media’s coverage of her personal life—including her choice to give birth to a baby with Down syndrome—did not translate into analysis of the policy implications of her values or in-depth consideration of the belief system that informs her choices.

As with election coverage across the board, strategy, political and horserace news have dominated. But attention to family-related topics ranked at No. 5 and accounted for 5% of this coverage—a sizeable portion when considering the relative lack of reporting on policy issues. Religion and abortion policy as news topics registered much lower, at only 1% and less than 1%, respectively, in the campaign coverage about Palin.

In other words, the media’s attention to Palin’s own views on the abortion issue did not translate into what that might mean for a McCain-Palin administration. Likewise, the treatment of Palin’s religious views was rarely the main focus of page-one stories or lead broadcast items, but rather was a small element woven into the dominant narrative of Palin’s biography and family life.

The religious press
Anecdotal evidence suggests that in some quarters of the religion-oriented media, Palin’s faith was a more pressing issue.

World Magazine, a popular news weekly with an evangelical perspective, ran a cover feature on Palin for its Sept. 20 edition that focused acutely on her religious background. Reporter Mark Bergin observed favorably that “In many ways, Palin’s faith and political philosophy developed in concert. Her small-government commitment, perhaps even libertarian streak, stems from belief in personal responsibility. Her pro-life views flow from a conviction that all of humanity possesses dignity and equal value no matter how small or frail. She has expressed support for teaching alternative theories of origins alongside Darwinism in public-school classrooms, especially theories that allow for a creator.”

Televangelist Pat Robertson’s Christian Broadcasting Network reported on Palin’s reception among attendees at the annual Values Voters Summit, sponsored by the conservative evangelical Family Research Council. The article quoted former House Speaker Newt Gingrich, who was one of the speakers at the event, saying of the Democrats: “They find Gov. Palin quite horrifying…Gov. Palin violates every norm they have.” In response to Charles Gibson’s ABC News interview with the vice-presidential nominee, Gingrich said “There’s a secular… religion bias in the mainstream media.”

Andy Crouch, a columnist for the evangelical flagship magazine Christianity Today, emphasized in a CT blog post the political implications of the Palin family’s personal decision to carry to term a baby they knew would be born with Down syndrome. Crouch is interested in, and hopeful about “the long-term cultural implications of the choice of Palin, whether the McCain-Palin ticket wins or loses in November, for one of the most vexing horizons of impossibility in our culture: the abortion rate among unborn babies diagnosed with Down Syndrome.”

Some of these themes have occasionally been picked up by the mainstream media, including opinion pages and profile pieces, although they have not generally been the focus of the reporting. Amy Sullivan, a religion reporter for TIME, wrote a Sept. 6 article called “Are Evangelicals Really Sold on Palin?” Liberal pundit Rachel Maddow’s new show on MSNBC has addressed the issue of separation of church and state, and whether or not a Palin vice presidency could jeopardize that. Earlier, on Sept. 4, both CNN and the Associated Press produced stories suggesting that the McCain campaign has been playing down the governor’s Pentecostal roots.

Some in the media, like NBC Nightly News on Aug. 29, have referenced her religious values obliquely, tying them to her family life. Correspondent John Larson narrated, “Gov. Palin is a solid conservative, firmly supporting gun rights and strongly opposing abortion. She and her husband decided to have their fifth child even though they were told the baby would be born with Down syndrome.” More recently, her statements about God’s will and the affairs of civil society prompted pointed questions from ABC’s Charles Gibson in his exclusive interview.

Others have addressed Palin’s church background as part of a larger story, but not as a primary focus. A Sept. 9 story on NBC’s Today Show about Palin’s record as governor of Alaska touched on her religious perspective: “On social issues, Palin has strong views. She favors teaching creationism alongside evolution in schools, and opposes abortion, except when the mother’s life is at stake.” But that was just one element inside a larger story.

It is important to keep in perspective the relative lack of attention to Palin’s religious biography within the mainstream media. Indeed, in general, most of the questions of background and policy have tended to take a back seat to campaign strategy stories. The top policy issues in campaign coverage last week, for example, were the economy at 4% and the Iraq war and terrorism, both at 2%. Meanwhile, strategic stories, including the horserace, accounted for much more, at 19% of the campaign newshole.

FOOTNOTE:
1. The methodology used to assess newshole was developed by PEJ for its News Coverage Index, the largest effort ever to measure and analyze the American news media on a continuing basis. The index examines some four dozen news outlets in real time to determine what is being covered and what is not, giving a broad sense of the American news agenda. The outlets studied come from the five main sectors of mainstream media: print, network TV, cable, online and radio. They include evening and morning network news, several hours of daytime and prime-time cable news each day, newspapers from around the country, the top online news sites, and radio, including headlines, long form programs and talk. In all, the index sample includes 48 outlets (35 each weekday with some rotation) every Sunday through Friday.