Overall, The Daily Show’s range of topics is somewhat more limited than the mainstream press generally. Yet in many ways the similarities between the comedy show and the news media are as striking as the differences.

Both The Daily Show and the press generally, for instance, had the same No. 1 topic for the year, U.S. Foreign Affairs, a category dominated by the war in Iraq. It made up 17% of the time on The Daily Show and 19% in the press overall. Politics, particularly the race for president, was the No. 2 topic in both as well, though it garnered an even larger share in The Daily Show (16% vs. 12%).

And in both the mainstream press and The Daily Show, the top three topic areas commanded the lion’s share of time—47% on The Daily Show and 40% in the press. 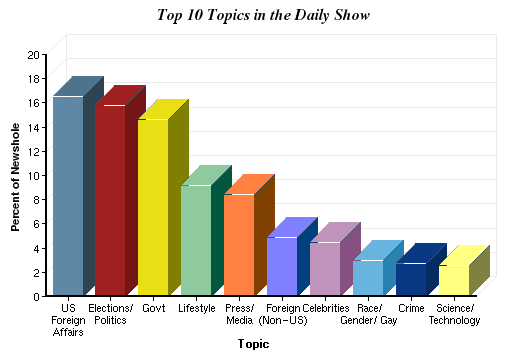 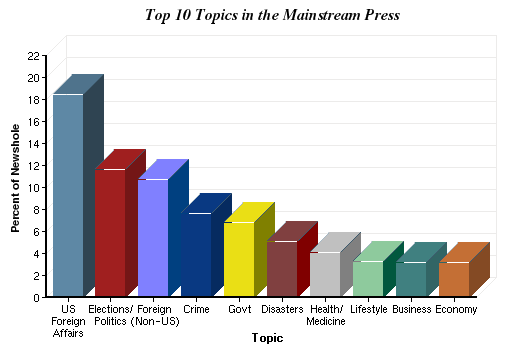 But the news agenda soon begins to diverge. The Daily Show is more focused on political matters and is more Washington oriented than the press overall.

The Daily Show’s No. 3 subject matter was government (15% of time), whereas that topic ranked only 5th in the press overall (at 7% of newshole). The Daily Show was also more interested in lifestyle news, celebrities, and talking about the media itself.

In contrast, the mainstream news media are more focused on such matters as foreign events not associated with the United States, crime, disasters, health, business and the economy.

One can see this narrow focus comes even more clearly by looking not at the broad topics covered but more specifically on the exact stories. As an example, the presidential campaign and the policy debate about the war in Iraq, together added up to more than a quarter of the time spent on The Daily Show (26%) for the year. [1] This was significantly more than in the mainstream press, where the two stories commanded 18% of the newshole studied during the same time period.

To illustrate that more limited range, it is helpful to note the subjects that The Daily Show de-emphasized—or completely ignored–in 2007. As Stewart described it to the host of PBS’ Bill Moyers’ Journal, “we feel no obligation to follow the news cycle…because… we’re not journalists.” [2]

Looking at what topics the show does and does not discuss also provides insight into editorial limitations on a program that relies so heavily on satire and comedy. While politicians and celebrities are easy to lampoon, such an approach is often out of bounds when it comes to tragedies and disasters. The August 2 bridge collapse in Minneapolis that killed 13 people accounted for 55% of the mainstream media’s coverage that day. It was not once mentioned on The Daily Show.

And the single largest story for any given week in 2007—the Virginia Tech killings— was all but absent from The Daily Show.
On April 16, the evening of the shootings, Stewart began his broadcast by stating that the show was not going to focus on the incident because of the desire to keep things light and funny. Stewart began, “Obviously for anybody who has been tuned to the television today, a horrible, horrible day. I have absolutely nothing to add that is insightful or anything. I will just do what I always do when faced with something that is that powerfully damaging to the emotional core: I will begin to repress it, and I will swallow it. And I imagine that thirty years from now someone will spill juice and I will freak the f*** out. So to that end, let’s move on as though the world is ok.”

In that broadcast Stewart doesn’t once refer to the incident itself by name.

Indeed, on many occasions, the top story in the national news media was quite different from the leading content on The Daily Show. On January 15, for instance, most mainstream news shows led with the story of severe weather and ice storms causing havoc across much of the nation. Stewart began his show by pondering what drink would be best to wash down a Jimmy Dean pancake and sausage on a stick. “On a stick, of course, because anybody eating chocolate chip pancakes and sausage is clearly on the go,” Stewart joked. (He decided on Gatorade A.M.).

Footnotes
1. Even though the stories about the debate over war policy in Iraq took place in Washington D.C., many of those segments were coded as “foreign affairs” because of their broad topic.
2. Bill Moyers’ Journal, PBS. April 27, 2007. Transcript available at http://www.pbs.org/moyers/journal/04272007/transcript1.html

Next: A Focus on Satire
← Prev Page
Page1You are reading page2Page3Page4Page5Page6Page7Page8Page9
Next Page →

Journalism, Satire or Just Laughs? "The Daily Show with Jon Stewart," Examined
What's On—And What's Not On—The Daily Show
A Focus on Satire Making Fun of the Press Attacking Politicians: Who Gets Ridiculed? The Daily Show is NOT Journalism Like a Cable Talk Show Methodology Topline