“I can’t tell who I’m running against sometimes,” 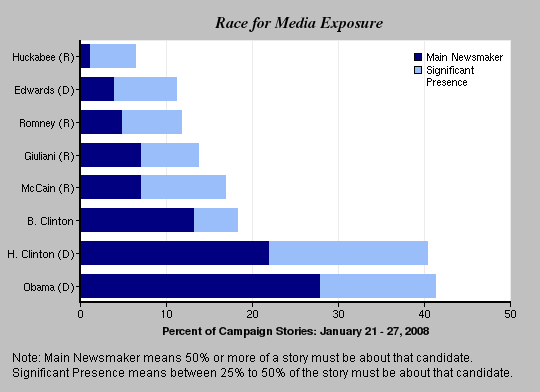 said Barack Obama last week. It was a reference to the aggressive campaigning before the Jan. 26 South Carolina Democratic primary by both Hillary and Bill Clinton.

Last week’s election coverage suggests he had a point. Although the landslide winner in South Carolina was the leading newsmaker of the week, he was certainly outdone in the race for media exposure by the Clinton tag team.

Obama edged Hillary Clinton by the narrowest of margins. But her surrogate and husband—whose aggressive attacks on Obama and increasingly conspicuous role have been manna for political pundits—was the third-most prominent newsmaker in the race for President last week, January 21 through 27. That period began two days after the Nevada caucuses and ended the day after the Democrats’ South Carolina primary.

The man who would be First Spouse made more news last week than any Republican, or than the other Democratic contender, John Edwards.

Among GOP rivals, Mitt Romney, a co-leader in many Florida polls, dropped precipitously in the race for exposure. So did Mike Huckabee, whose candidacy the media now appear to discount.

And Rudolph Giuliani was back, his coverage more than tripling from the week before, despite plunging in the polls—a sign that media coverage and poll numbers do not necessarily track.

Some candidates apparently are a good story whether they are rising or falling.

These are some of the findings from Project for Excellence in Journalism’s third edition of the Campaign Coverage Index, a measure of which candidate is winning in the all-important race for media exposure. The project will run the Index until nominees are selected in each party.

Obama, who ended the week of Jan. 21-27 with a surprisingly big win in South Carolina, was a significant or dominant newsmaker in 41% of the week’s campaign coverage. That marks his highest coverage level in the three weeks since the Project began its CCI and the first time he has edged Clinton.

It is not true, as some might have imagined, that Bill got even more coverage than his wife. But when Hillary Clinton’s 40% and Bill Clinton’s 18% coverage totals were added together, they were dominant or significant subjects in well over half the week’s campaign stories. John Edwards’ coverage increased, but at only 11%, he generated about one-fourth as much attention as the two frontrunners. 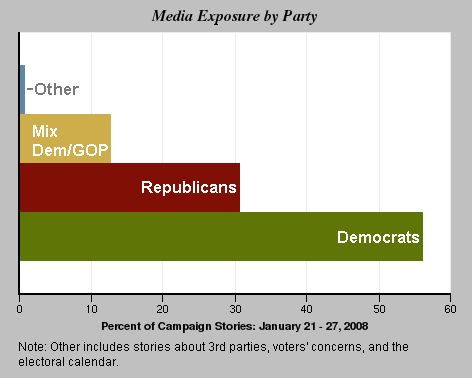 The leading Republican was John McCain, who was a significant or dominant newsmaker in 17%, down from 23% the previous week. Mitt Romney, although considered a co-frontrunner with McCain in the Florida fight, plummeted to 12% from 25% the week before. Mike Huckabee slid to 6% from 14%, with the media apparently concluding that his second-place South Carolina finish on Jan. 19 had crippled his chances.

Sitting out the first few contests, Giuliani showed up as a significant or dominant figure in only 4% of the stories in each of the two previous weeks. But last week, he was at 14% as the media focus shifted to Florida. Unfortunately for him, much of that coverage was about how his poll numbers had fallen.

Once again the campaign overshadowed every other news event last week. The presidential campaign filled 39% of the newshole as measured by PEJ’s News Coverage Index from Jan. 21-27, exactly the same percentage it had filled the week before. As was the case the previous week, the two sectors that devoted the most coverage to the campaign were cable news (61%) and radio (45%)—two platforms that also feature highly opinionated talk hosts.

In some ways, the similar level of coverage between Obama and Clinton made sense. As the coverage unfolded, Obama and both Clintons were linked in the same narrative of attack and counterattack—much of it centered on the proprietary, accuracy and efficacy of the attacks themselves. Were the Clintons playing the race card? Were their attacks fair? Or was Obama getting the better of the spin? The dynamic left the press wondering about the longer range impact of such a bruising week on both campaigns.

Hillary Clinton came into the week savoring a tough win in the Jan. 19 Nevada caucus, but the story quickly became her husband’s expanding role. One example was the Jan. 21 ABC report that highlighted Bill Clinton attacks on Obama about everything from his position on Iraq (a “fairy tale”) to his assertion that the Republicans had been the party of “ideas.”

As the week wore on, however, the narrative seemed to suggest that Clinton’s tactics, especially Bill’s, were dangerous and possibly out of bounds.

Bill Clinton’s “recent outbursts are raising questions about how far is too far and when might this asset turn into a liability,” stated correspondent Dan Harris who then cited concerns about “whether Hillary Clinton can rein in her husband even if she wanted to.”

Even in its endorsement of Hillary Clinton on the eve of South Carolina, the New York Times called for a change in “tone” warning that “Bill Clinton’s overheated comments are feeding…resentments, and could do long-term damage to her candidacy if he continues this way.”

A fair amount of coverage also tried to evaluate the Clinton team in tactical terms. Would the strategy work? The Austin American-Statesman foreshadowed Obama’s big margin among South Carolina blacks by noting that the racially tinged campaign had “left black voters in this state confused, angry and feeling somewhat betrayed.” (CNN exit polls found that about 60% of Democratic primary voters considered Bill Clinton’s role an important factor in their vote and of that group, Barack beat Hillary Clinton by 11 points.) A longer view was offered on the Fox News Channel’s Hannity & Colmes by Clinton-advisor-turned-critic Dick Morris. Morris contended the Clintons’ strategy was to turn South Carolina into “the black primary” that would trigger “a racial backlash [that] causes the whites to vote for Hillary and she wins Florida and Super Tuesday.”

Obama threw some shots of his own. Bill Clinton “continues to make statements that are not supported by the facts,” he said on Good Morning America “…This has become a habit.” But a bigger question in the media narrative was whether the South Carolina clashes had eroded Obama’s cross-demographic appeal.
The National Journal’s Linda Douglass said on the PBS NewsHour that “it seems pretty clear that Barack Obama now has been identified as the African-American candidate. It’s something he tried to avoid reaching across the color line in the earlier races.”

After the South Carolina vote, however, that assessment—that the Clinton tactics would doubtless marginalize Obama—seemed premature, and the media’s surprise may have amplified the sense of Obama’s victory. “A Margin That Will Be Hard To Marginalize,” the Jan. 27 Washington Post headline read.

“Senator Barack Obama proved in South Carolina on Saturday that he could not only endure everything the Clinton campaign threw at him in the most confrontational week of the presidential contest so far but also draw votes across racial lines even in a Southern state,” the New York Times story that day said.

On the Republican side, McCain made news on several fronts, ranging from his New York Times endorsement (which he has not exactly bragged about) to his problems with such pillars of conservative talk radio as Rush Limbaugh and Sean Hannity. The media had McCain locked in virtual tie in the pre-Florida election polls with Romney, who saw a significant drop in coverage and some unflattering stories as well.

A Jan. 24 New York Times piece pondered Romney’s apparent emergence as the candidate most disliked by his Republican rivals. “With so much attention recently on the sniping between Senators Hillary Rodham Clinton and Barack Obama on the Democratic side, the almost visceral scorn directed at Mr. Romney by his rivals has been overshadowed,” the story asserted.

If Giuliani had a moment in the media spotlight last week, it turned cloudy fast. A Jan. 25 ABC report that he had slipped back in the Florida polls sounded like a political obituary. “Political observers are trading theories as to what happened to Giuliani’s campaign,” said correspondent Jake Tapper.

Two campaigns officially faded into the past tense last week—those of Democrat Dennis Kucinich (3% in coverage) and Republican Fred Thompson (5%). But the winner of the Iowa caucuses, who also nearly won South Carolina, Mike Huckabee last week fared only slightly better in the competition for coverage—at 6%. That seemed to reflect something of a dismissal of Huckabee’s chances by the media.

“Huckabee’s second-place finish in South Carolina has left him strapped for cash,” declared a Boston Globe story. “He is not running television ads in Florida, has suspended a press charter plane because not enough reporters are following him to require one, and acknowledged yesterday that he has stopped paying some top staff.”

By the metrics the press uses to measure viability, Huckabee is disappearing. And so is the attention paid.

For the second week in a row, the U.S. economy generated major coverage and was the second-biggest story. In the week of Jan. 21-27—which included an emergency fed rate cut, a 600-point one-day swing on Wall Street, and preliminary agreement on a stimulus package—the economy filled 19% of the overall newshole, including 26% of the airtime studied on network TV news and 23% of the front-page coverage in newspapers.

The third-biggest story of the week (at 4%) was the mysterious death of young Australian actor Heath Ledger in his New York apartment. Rounding out the top-five stories was the build-up to the Super Bowl (2%) and events on the ground in Iraq (2%).