If the economy falls into recession or becomes the dominant issue in the presidential primaries of 2008, how much did the news media offer an early warning sign of what was happening? 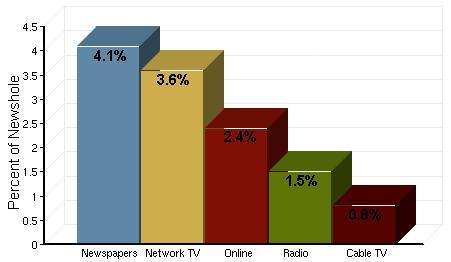 In the third quarter, the U.S. economy emerged as a top-10 story for the first time in 2007. All told, a variety of story lines combined to make the economy the No. 6 story overall as measured in PEJ’s News Coverage Index, filling 3% of the newshole.

While a substantial increase, if the economy worsens, critics may look back and wonder if the press should have done more, and whether being the sixth-biggest story of the third quarter was enough.

What the media picked up on in the story, the key narrative threads, were Wall Street’s wild ride, a real estate recession, and the sub-prime mortgage scandal and its associated credit crunch.

Of these, the biggest coverage catalyst in the story was the housing/sub-prime mortgage crisis. That topic accounted for 52% of the overall economic coverage in the quarter. The only other economic category that generated substantial coverage was interest rates, which made up 17% of the economic news. Unemployment rates and job issues came next, making up 4% of the economic stories. (Stories that were strictly about stock market vacillations without tying them to the broader economy were not included in the U.S. economy category.)

Although housing issues dominated, the attention varied among media sectors. The real estate issue generated the most coverage in newspapers (61% of all economic coverage) and network TV (60%). At the other end, the subject only accounted for 33% of the economic coverage online. 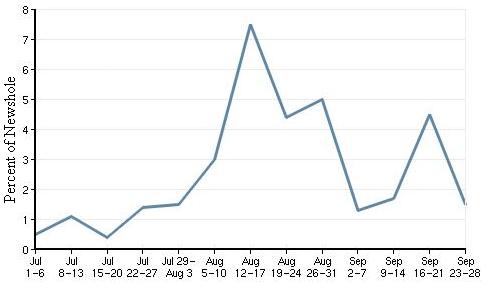 The story of the economy and the housing sector began kicking into high gear in the last week of July. The July 27 Today show opened with co-host Meredith Vieira doing a story from the floor of a New York Stock Exchange that had been rattled the day before by a 311 point drop. Blaming the stock slide partly on “the housing slump,” Viera said “We don’t want people to panic … But what are investors supposed to make of the news?”

A few minutes later, Today offered a kind of tongue-in-cheek example of the “troubled housing market.” A man desperate to sell his 4,000-square foot Florida condo decided to throw in $20,000 of clothes he had designed, some of which had been worn by celebrities. The cost of the condo (and clothes)? A cool $3.5 million.

The biggest single week for economic coverage was Aug. 12-17. The story, at 7%, was the second-biggest of the week, close behind the presidential campaign (8%). That week saw a one-day Dow plunge of 167 points and a Federal Reserve Board cut of the loan discount rate from 6.25% to 5.75%. It was also the week when analysts and the media began speculating about whether Countrywide Financial Corp., the nation’s biggest mortgage lender, might be headed for trouble as a result of the collapse of the sub-prime lending market.

“Top lender could go bankrupt” read the headline on an LA Times story picked up in the Aug. 16 Bakersfield Californian. One industry observer was quoted as saying that if Countrywide failed, “It would be a huge shock to the U.S. housing system and the mortgage system as perceived around the world—and make an already bad situation terrible.”

Clearly, journalists began sounding some alarm bells about the economy in the third quarter, transforming the subject into a top-10 story. But given the potential impact of an economic slowdown on virtually every sector of society, it remains to be seen whether the story merited even more media attention than it received.

Next: Disasters Get Big Play
← Prev Page
Page1Page2You are reading page3Page4Page5Page6Page7Page8Page9Page10
Next Page →