On the surface, the amount of coverage devoted to all three major threads of the Iraq war—the Beltway-based policy debate, events inside Iraq, and the war’s impact on the homefront—remained virtually unchanged between the second and third quarters of 2007. The war in total accounted for 15% of the newshole in the second quarter and 16% in the third quarter. (That is a significant drop from the 22% of the newshole that the war, in all its aspects, filled in the first three months of the year.) 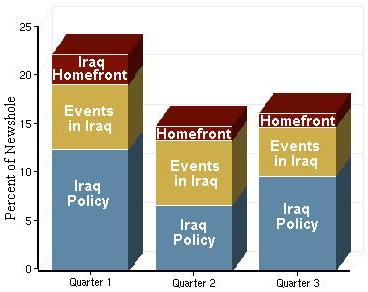 But these overall numbers alone are deceptive. The smallest of the three story threads, the war on the homefront, dropped from 2% to 1% from the second to third quarter. The middle thread, events inside Iraq, dropped by more than 25%, from 7% to 5 % in the same period.That leaves the biggest component of the story so far this year, the debate over U.S. war strategy. Media attention to that element of the Iraq war jumped to 10% in the third quarter, up from 7% in the second. In doing so, it moved past the presidential race (9%), the biggest story from April through June.

But a closer look reveals that coverage of the policy debate over the war was an up and down matter. To a large extent, the jump in coverage of the subject is the result of two weeks of intensive coverage surrounding General David Petraeus’s much-anticipated Sept. 10 status report to Congress. For more than half of the quarter, by the standards it has set earlier in the year, the Iraq debate was a relatively minor story.

The lull in coverage had begun after President Bush scored a major victory on May 24 by winning Congressional funding for the war without any troop withdrawal deadlines attached. With the battle for control over war conduct temporarily resolved, coverage dropped off markedly until mid-July. There was a brief spike that culminated in the July 17 “slumber party,” when Democrats forced an all-night debate on the war in the Senate. But media attention dipped again for several weeks.

As anticipation grew for General Petraeus to report to lawmakers, so did the coverage, again. By the time the General came to Capitol Hill to brief Congress on the status of the surge, he was operating from a position of relative strength. A New York Times/CBS poll at the time indicated that 68% of the public most trusted military commanders to resolve the war compared to 21% who said Congress and 5% who cited the Bush administration. 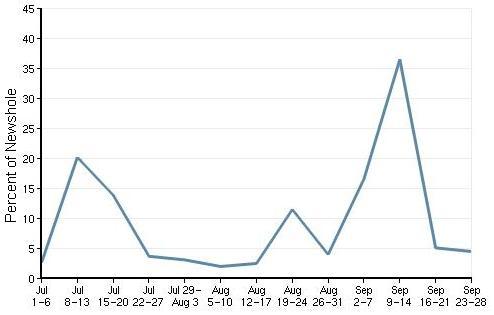 For months, the “Petraeus Report,” had been thought of as a potentially decisive moment for either rallying or further eroding public opinion about the war. But it proved to be anti-climactic. In terms of shaking up the status quo, Petraeus’ appearance, in effect, changed little. The Washington Post quoted former Clinton chief of staff Leon Panetta saying: “The headline for the last week is that the war is pretty much going to be on a stay-the-course path …”Perhaps, but that didn’t stop the press. Coverage of the Iraq policy debate filled an impressive 36% of the newshole from Sept. 9-14, making it the second biggest single-week story in the first nine months of 2007, behind only the Virginia Tech campus massacre.

The week before (from Sept. 2-7), coverage of the policy debate in the buildup to Petraeus’ report was also the leading story at 17% of the newshole. That flurry of attention around the general’s visit to Congress was a major reason why the policy debate over the Iraq war regained its status as the leading overall story of the quarter.

Looking at the numbers week by week, they show a bumpy ride. In seven of the 13 weeks in the quarter, the Iraq debate had shrunk to a middle spot in the news agenda, below 5% of the newshole as measured in PEJ’s Index. But in five largely isolated weeks, it spiked to 12% or more and finished as the top story of that week. That was enough to edge out the race for president as the top story.

In reality, the war debate has become an issue that is well known, even well followed, but can no longer be said to dominate the news agenda as it did earlier in the year. Many weeks, it is just another issue, one often dwarfed by breaking news events and usually by domestic politics.

It also mattered what media one consumed. For the quarter, coverage of the policy debate was smallest on the front pages of newspapers (7%) and greatest in both the cable and radio sectors (12%). There were also considerable differences in the amount of attention devoted by liberal radio talk hosts (17%) and their conservative counterparts (9%); a large coverage differential between MSNBC (18%) and the Fox News Channel (8%); and a gaping chasm between PBS’s “NewsHour” (23%), and the three commercial broadcast networks, NBC’s “Nightly News” (6%), “The CBS Evening News” (7%) and ABC’s “World News Tonight” (8%).

Events in Iraq and the war at home

In the end, coverage from Iraq slipped to 5% of the newshole in PEJ’s Index, down from 7% in both of the first two quarters of the year. It also fell from being the No. 2 story overall in the second quarter to No. 3 in the third.

But unlike the policy debate, the week-to-week trajectory for third quarter coverage of the situation in Iraq was fairly constant. In 12 of the 13 weeks in this report, the story never fell below 3% of the overall coverage nor exceeded 6%. (In seven of those weeks, it registered the same, at 5% of the newshole.)

Events in Iraq by Media Sector: All Three Quarters 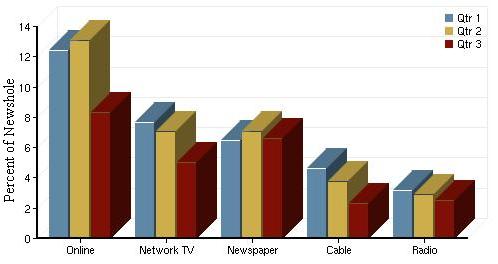 Only once, in the period from Sept. 16-21, did events inside Iraq crack double digits, when they filled 10% of the newshole and became the second-biggest story of the week. In that case, the incident fueling the coverage did not directly involve the U.S. military in Iraq, but introduced something of a new dimension to the narrative. It was the controversy over charges that the private security firm, Blackwater USA, had killed 17 Iraqis in an unprovoked Sept. 16 attack in Baghdad.

From the second to third quarter, coverage of events in Iraq remained stable in the newspaper and radio sectors. But it fell off measurably in network TV (7% to 5%), cable (4% to 2%) and even in the online sector (from 13% to 8%), though it was the still the No. 1 story online from July through September.

Coverage of the homefront has consistently been the smallest component of the Iraq story in 2007. At 1% of the newshole, it continued its steady slide in the third quarter, down from 2% in the second quarter and 3% in the first quarter. Coverage of the homefront had one major burst of sustained coverage all year, when it finished as a top-five story in four consecutive weeks, from Feb. 25-March 23. That can be largely attributed to the Washington Post’s powerful two-day (Feb. 18 and 19) investigative series on substandard conditions at Walter Reed Army Hospital. Beyond that, this element of the story remains small—overall the No. 7 story of the year.

Next: The 2008 Campaign: Steady Coverage with Clinton as Top Newsmaker
← Prev Page
Page3Page4Page5You are reading page6Page7Page8Page9Page10Page11Page12Page13
Next Page →