A study by the Project for Excellence in Journalism and the Joan Shorenstein Center on the Press, Politics and Public Policy
In the early months of the 2008 presidential campaign, the media had already winnowed the race to mostly five candidates and offered Americans relatively little information about their records or what they would do if elected, according to a comprehensive new study of the election coverage across the media.

The press also gave some candidates measurably more favorable coverage than others. Democrat Barack Obama, the junior Senator from Illinois, enjoyed by far the most positive treatment of the major candidates during the first five months of the year—followed closely by Fred Thompson, the actor who at the time was only considering running. Arizona Senator John McCain received the most negative coverage—much worse than his main GOP rivals.

Meanwhile, the tone of coverage of the two party front runners, New York Senator Hillary Clinton and former New York Mayor Rudolph Giuliani, was virtually identical, and more negative than positive, according to the study by the Project for Excellence in Journalism and the Joan Shorenstein Center on the Press, Politics and Public Policy. 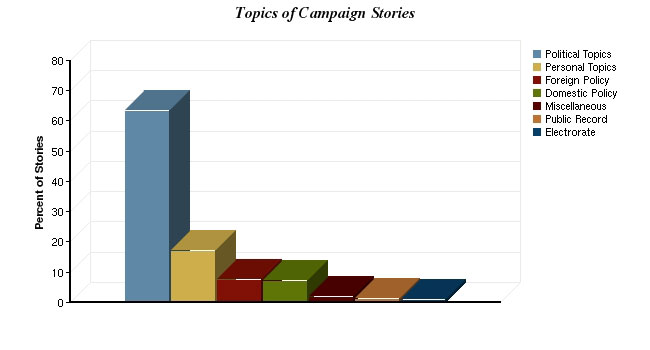 The press’ focus on fundraising, tactics and polling is even more evident if one looks at how stories were framed rather than the topic of the story. Just 12% of stories examined were presented in a way that explained how citizens might be affected by the election, while nearly nine-out-of-ten stories (86%) focused on matters that largely impacted only the parties and the candidates. Those numbers, incidentally, match almost exactly the campaign-centric orientation of coverage found on the eve of the primaries eight years ago.

All of these findings seem to be at sharp variance with what the public says it wants from campaign reporting. A new poll by The Pew Research Center for the People and the Press conducted for this report finds that about eight-in-ten of Americans say they want more coverage of the candidates’ stances on issues, and majorities want more on the record and personal background, and backing of the candidates, more about lesser-known candidates and more about debates.[1]

Among other findings from the PEJ-Shorenstein study:

The findings about who got the most favorable coverage and the focus on horse race in many ways reinforce each other. Obama, the first candidate of color to be a major White House contender, performed better in polling and fundraising than expected in these early months. McCain, in contrast, was a former presumed front runner who fared far worse in the polls and in fundraising than anticipated.
Even coverage of issues and candidate background was often cast through a political lens, frequently in the form of exploring the potential vulnerabilities of key candidates. For Clinton, this strategic focus translated into more coverage of her evolving stances on the Iraq War, something that created strains with elements of her party’s more liberal base. For Giuliani it resulted in coverage of his position on abortion and his marriage history, two areas that raise questions about his chances with the conservative base of his party. For Romney it meant more coverage of his religion as a member of the Mormon Church.

Next: The Early Start, the Public and the Press
← Prev Page
You are reading page1Page2Page3Page4Page5Page6Page7Page8Page9Page10
Next Page →

The Invisible Primary - Invisible No Longer
The Early Start, the Public and the Press Election Topics Impact The Competition for Exposure Tone The Candidates The Media Sectors Conclusion Methodology Topline--Data Tables