One thing Web sites clearly promote and project is an image of the candidate that they (and their strategists) think will work best. So what are those images? What buzz words are popular this year—and which ones define which parties?

To find out, we combed through the text of the most universal section of the sites—the candidate biographies.[1] Some words were clear favorites, some were avoided altogether and some seemed determined by party-line preferences.

The Most Frequent Words

Looking across all the candidate biographies, the two most dominant themes were the nation and the family. The words ‘U.S.’, ‘America’ and ‘American’ appeared 171 different times in the 19 biographical sketches.[2] These patriotic terms are even more popular among Democratic candidates.

The words “children” and “family” are the next most popular. They appear 124 times in the 19 biographies (and one of the two terms appears in all 19 profiles).

Together, these mom and apple pie terms outpace Iraq, health care, or anything else.

The word “children”, though, was the most popular single word (66 mentions). Appearing in 15 of the 19 biographies, it is a top word among both Democrats and Republicans, though it is the Democrats who focus on it most in legislative terms.[3]

For most candidates, mentions of children occur when they are talking about their own. But it is also often used as a way to talk about their work or allude to an issue. Mitt Romney, for example, talks of his five sons and ten grandchildren and then also of how his wife, Ann, is “dedicated to improving the welfare of children, both locally and internationally.” John Edwards and his wife Elizabeth are not just parents of four children, but “passionate advocates for children and families.”

And what words are not playing well this year?

The words ‘God’ and ‘religion’ were not mentioned at all. Neither was the word ‘moral.’ A related keyword, ‘ethics,’ is largely absent as well, appearing only once across all candidates. (It is used by Democrat Barack Obama, who talks of being a leader in “championing ethics reform that would root out Jack Abramoff-style corruption in Congress.”)

Even the word ‘faith,’ which often carries a broader connotation of loyalty and trust, appears only eight times. And, the candidate who uses it most, Mitt Romney, is mostly referring to his wife’s active involvement in “faith based organizations” and being a member of the “Faith and Action committee” rather than his own Mormon practices.

The other area where candidates across the board seem hesitant to tread is in the use of ideological identifiers. Democrats have altogether avoided the terms “progressive” and “liberal” in their biographies. And Republicans have shied away from the use of the term “conservative.” Indeed, the top-tier candidates—John McCain, Mitt Romney and Rudy Giuliani—avoid the term all together (it appears just eight times in the biographies of four fringe Republican candidates).

If the Web sites are any hint, in other words, this may be the campaign in which candidates are trying, at least so far in the process, to move beyond ideology or traditional party identifiers.

Beyond these broad tendencies, there are clear party-line differences in the buzz words of campaign 2008. The concepts of “children” and “family” dominate the Democratic profiles, while those of the Republicans emphasize “taxes.”

Among the Democratic candidates, the words children and family often occur together to emphasize both the candidates’ family values and to highlight work they’ve done. Hilary Clinton gives the concept the most play with 28 mentions in her biography alone, most of which refer to her child-related initiatives. Indeed, her section on being a mother and advocate is full of her work for and interest in children:

“Next came Yale Law School, where Hillary focused on questions about how the law affected children and began her decades of work as an advocate for children and families. As a law student, Hillary represented foster children and parents in family court and worked on some of the earliest studies creating legal standards for identifying and protecting abused children. Following graduation, she became a staff attorney for the Children Defense Fund.”

Later on, she also highlights her work with the Arkansas Advocates for Children and Families and her stint on the Children’s Television Workshop.
But she’s not the only Democrat putting forth a cause—Chris Dodd talks of being a “tireless advocate for helping children and families”, while John Edwards has “dedicated his career to representing families and children…”. Barack Obama talks about his specific efforts to “help working families get ahead by creating… state Earned Income Tax Credit, which in three years provided $100 million in tax cuts.”
Democrats seem to place the next biggest stress on the nation—referencing both American and America generously in their profiles. From the complexities of the American foreign policy (Biden) to a commitment to health care for every American (Clinton) and from exciting the next generation of young Americans (Kucinich) to solving the challenges of everyday Americans (Obama), Democrats are keen to stress their identity as patriots.

Inside the Republican biographies, quite a different picture emerges.

Top 5 Words by Frequency
There is much less focus on children and family. While eight of the eleven Republican candidates use the term, only four of them mention them in relation to any legislative work.

They do, however, also focus on patriotism. It comes up when talking of U.S. defense jobs or being a United States senator or even as James Gilmore puts it, being “the answer to the question… “Is there a strong, steady, electable, conservative Republican candidate for President of the United States?”

Republican biographies are the only ones that explicitly mention ‘traditional.’ They also use ‘values’ much more than Democrats. For example, James Gilmore talks of family values or traditional values four times in his biography alone. Mike Huckabee puts forth his vision of “American values and priorities” while Ron Paul talks of being an “unwavering advocate of pro-life and pro-family values.”

The second-most frequently word on GOP sites was governor. Much like the use of senator among the Democrats, it reflects the ranks of the candidates—Jim Gilmore, Mike Huckabee and Mitt Romney were all governors of Virginia, Arkansas and Massachusetts respectively. Their constant references to themselves using the prefix or their deeds as governor add up to a total of 29 mentions. 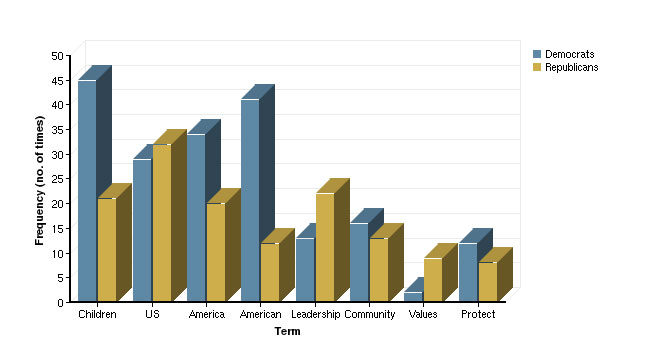 Unlike the Democrats (reference to their party affiliation ranks 14th place) the Republicans draw attention to their party label repeatedly. Appearing 26 times in the 11 biographies, “Republican” is their third most frequently used word.

Sam Brownback proudly cites an Economist article that calls him a “Wilberforce Republican,” while Tom Tancredo calls himself a “solid pro-life, pro-gun, small government Republican.” James Gilmore is less specific, but declares that he has “exactly the credentials that most Republicans are looking for in their nominee for President”. Rudy Giuliani boasts of how he was the “first Republican elected Mayor of the City of New York… in which Democrats outnumbered Republicans five to one.” The party-term is definitely favored over the ideological descriptive, ‘conservative’ which appears just 8 times, and only among long shot Republican candidates Sam Brownback, Jim Gilmore, Mike Huckabee and Tom Tancredo.

If children and family is the domestic issue Democrats refer to in their biographies, for Republicans it is taxes. GOP candidates invoke it repeatedly – making it their fourth most frequently used word – and in most cases, with promises to reduce them. Jim Gilmore, who calls tax cuts a traditional Republican principle, mentions it repeatedly, with some justification—he “signed into legislation five different tax cuts including a 70 percent cut of the infamous car tax by $1.1 billion, the largest tax cut in Virginia history.” Mike Huckabee, a self confessed fiscal conservative, also talks at length about his proposed “Property Taxpayers' Bill of Rights” and how he “cut taxes and fees over 90 during his ten and a half years as Governor.” 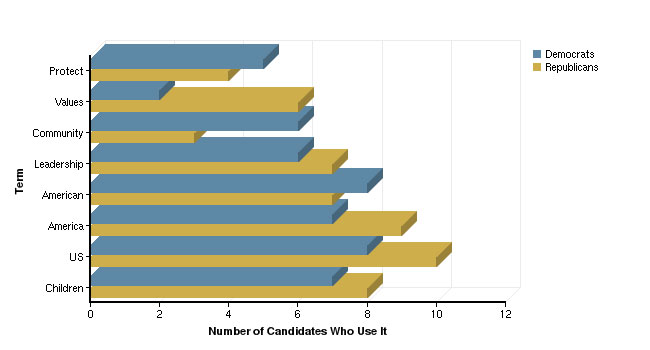 Beyond looking at the most frequent words of each candidate, we tried to see what, if any, was the thread among the top-tier candidates. It seems they’re more alike than different.

John McCain and Hillary Clinton are similar in their emphasis on children and the nation, while Barack Obama and Mitt Romney are noteworthy in their use of the word community—both have it as the third most frequently used word in their profiles. Four of the six have the state (or city) they’ve worked in as a top word, stressing their local experience as a platform for their national aspirations.

Three of them have their spouses’ names as a top word. The doting husbands are McCain (15 mentions of Cindy), Edwards (12 mentions of Elizabeth) and Obama (11 mentions of Michelle). Both Giuliani and Romney have a separate section on their wives even though they may not take their name as much, but Hillary Clinton mentions her husband just twice, buried within sentences, even despite a whole “First Lady” sub-section in her biography.

1. All candidates also had an issue section but those varied greatly in topic, format, focus and length.

3. Only 4 candidates have no mention of the term ‘children’. Barack Obama, the only Democrat not to use the term, refers to his family sporadically but confines mentions of his children to a sentence about his two daughters. Of the three Republicans don’t use the word children—Gilmore, Giuliani and Tancredo—Gilmore and Tancredo have a brief line on their families, but no more than that.