Throughout the entire period examined, print outlets dominated the coverage. The overwhelming majority of stories, 202, came from print outlets. And 82 of the 93 outlets that carried even a single story on PSCs were print.

Coverage by Genre
Print and Other Outlets 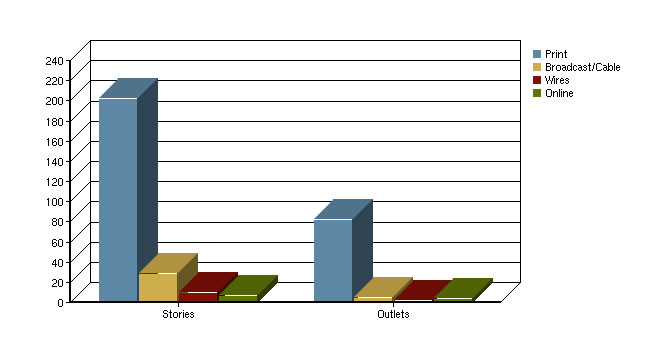 Broadcast and cable outlets aired 29 stories in five different outlets. More than half of stories came from one outlet, National Public Radio. Nine stories came from the wires. Most of these stories were pegged to the release of a report or the actions of Washington policymakers who were interested in monitoring PSCs. There were, however, occasional bigger pieces of enterprise reporting like the May 7, 2004 AP story headlined “Pentagon Memo Warned in 2002 about lax oversight of Army Contractors.”

Seven stories came from the four online outlets that posted stories discussing PSCs. (These outlets – including washingtonpost.com, Slate, Salon and MarketWatch.com – were the only news Web sites searchable in the Lexis/Nexis universe of this study).

On the whole the PSC story existed on two tracks. It generally attracted ongoing and, at times, in-depth coverage in the nation’s larger, best-known outlets. The other source of fairly frequent coverage was the smaller newspaper located near a key PSC.

In total we found 105 stories with a reference beyond death or injury to PSCs in 29 different large outlets— they include television and cable news networks, NPR, and papers with a greater national reach and impact such as the New York Times, Washington Post, and Los Angeles Times.

Additionally, we found 10 AP and UPI stories, which we counted separately because even though they appeared on the Lexis/Nexis search, there no way to confirm that they actually were published.

That’s not a huge number, but ultimately it was a few of the nation’s largest newspapers and National Public Radio that led the way in examining the major issues surrounding PSCs. The Washington Post ran 19 stories mentioning one of our key terms. The New York Times published 17. NPR aired 17 segments. The Los Angeles Times ran nine stories. 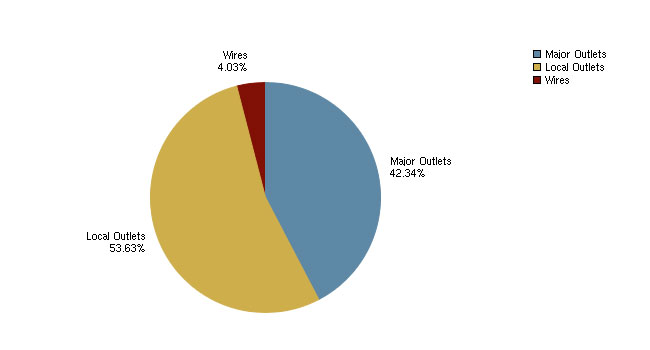 Number of Outlets Reporting on PSCs
Major vs. Local 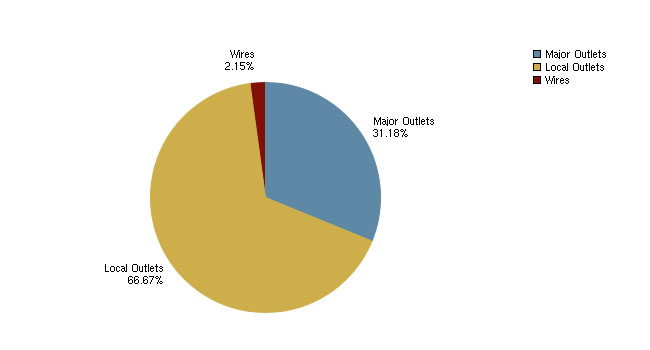 Local outlets actually had more stories about PSCs, 133, but they were in only 62 of the 388 local outlets searched. – for an average of roughly two per outlet. It should also be noted that while we labeled these outlets as “local,” they include among their ranks some big metro dailies that have regional audiences, such as the Dallas Morning News and Boston Globe.

Of the 62 outlets that published or aired something, most of these ran just one story while three smaller papers carried the bulk of the reportage. The Charleston (W.V.) Gazette ran eight stories, the News & Observer in Raleigh carried 10 and Virginian-Pilot totaled 17. These were not wire service pieces laid into the pages, but original work by staff reporters.

Broadening the search to include the word “Blackwater” for the two outlets based close to that security contractor—the News & Observer and Virginian-Pilot—turned up  somewhat more stories that addressed the subject of PSCs functioning as paramilitary forces. Using that expanded search, the total of stories that focused on the role of private security forces rose to 20 articles for the News & Observer and 24 for the Pilot. Those numbers do not include other stories that the papers did about outsourcing to contractors, cost overruns and more.

Those numbers suggest that the people most exposed to information about the role of private security companies in Iraq may be those that live closest to them. For the rest of the country, the issue has received relatively scant coverage.