Over the course of the conflict in Iraq the coverage of PSCs has remained on the fringe – save for a big spike in 2004 that was linked to the infamous Fallujah attack. The group was traveling with a supply truck near a U.S. military air base in Habbaniya when they were attacked by insurgents on March 31. Bodies were dragged through town and strung up on a nearby bridge. 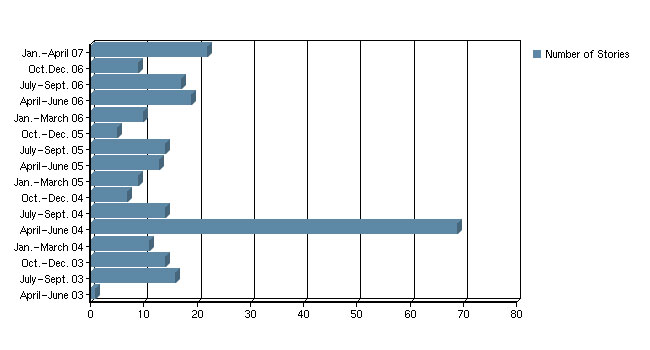 The year the war began, 2003, saw few stories mentioning PSCs – 31 in total from the March 20 start of the war through the end of the year. The initial phases of combat were less about securing the country than straight combat, taking land and the push to Baghdad.

The following year, things changed. The primary story line focused on the efforts to get control of the country. And there was a boom in stories about the firms in mid-2004 after the killing of the Blackwater security consultants. Stories about the grisly murders led to a rush of coverage about PSCs. In the media outlets we examined, there were 13 stories on April 2 using one of our search terms – the highest tally of any single day. There were 36 stories in total that month, the highest monthly tally.

Coverage continued at a higher level for the next several months, for a total of 90 stories over the course of nine months. Yet, as the months of 2004 went by, there were fewer and fewer pieces. By 2005, the number was down to the pace it was on before the Blackwater incident – with only 41 stories using our terms that year.

The number climbed back up again in 2006 to 55 stories, though that bump up was largely the result of two things – CNN’s repeat of its story on PSCs in June and the Virginian-Pilot’s stories on the issue that summer.

Through the first four and a half months of 2007, the numbers are on track to largely comport with what we have seen other years. We found 22 stories that used one of our terms, which would put the figures on track to be somewhere in the mid-60s by year’s end. The slight uptick is again largely due to Blackwater, specifically the publishing of the book “Blackwater: The Rise of the World's Most Powerful Mercenary Army” in February. Author Jeremy Scahill has written op/eds and appeared on the radio to promote his book.

Next: Coverage Differences Among Outlets
← Prev Page
Page1Page2Page3Page4You are reading page5Page6Page7
Next Page →