With each election cycle come more websites and more political predictions. With a Democratic surge apparent, and more competitive contests this year, the race for prognostications was even more intense than usual. Who fared best in the 2006 midterm elections?

Perhaps Larry Sabato really does have a crystal ball, which happens to be the name of his website. While there are still a few extremely close House races to be resolved, the Nov. 7 results reveal the University of Virginia political science professor probably came closer than any other of the 10 top political predictors this cycle.Sabato, the operator of a website called “Larry Sabato’s Crystal Ball,” not only correctly predicted that the Democrats would take control of the Senate. His projection for the new House—232 Democrats and 203 Republicans—is very close to what could be the final tally. (While many media organizations still show a few House races as undecided, MSNBC has projected that the final count for the new House will be 234-201.)

In order to test the prognostication skills of some of the leading political pundits, the PEJ looked at 10 pre-election predictions, most from notable campaign watchers. Seven of them came from a roster compiled by blogger Ed Fitzgerald and three were included in a set of predictions published in the Nov. 5 Washington Post. 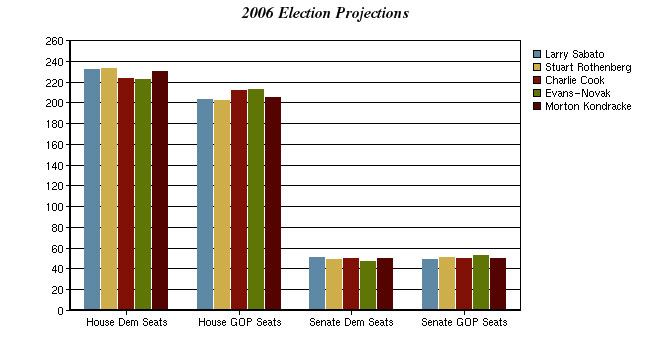 Depending on how a few tight races ultimately get resolved, some of the other pundits could get the House right as well. Morton Kondracke, executive editor of Roll Call, is still alive with a pick of 230-205. And Stuart Rothenberg, who produces a well-known political report, has a chance with his 233-202 estimate. Some students at Montgomery Blair High School matched Sabato’s 232-203 pick. (But Kondracke, Rothenberg, and the students all missed the mark with their Senate predictions, still giving Sabato the edge.)

At the low end of estimates for Democratic pickups in the House were “Cook Political Report” author Charlie Cook, Bob Novak’s “Evans-Novak” newsletter and a panel of GOP insiders selected by the National Journal.

Fitzgerald also averaged dozens of those predictions to come up with an overall pre-election stab at the voters’ intentions. Those final average tallies (50-50 in the Senate and 229– 206 in the House) proved to be more accurate than the picks made by groups of both Republican and Democratic insiders assembled by the National Journal. And they certainly reflected the overarching consensus that Nov. 7 was going to be a big day for the Democrats.