The latest circulation numbers seem to show more of the same for a newspaper industry that’s been steadily losing readers.

Confirming speculation that 2006 has been a difficult year, the six-month statistics from the Audit Bureau of Circulations (ABC)—from March 30 to Sept. 30—reveal the steepest average decline in at least 15 years. As of September 30, average daily circulation for all papers dropped 2.8%, compared with the same period last year, while Sunday circulation fell even more, 3.4%. These figures put combined newspaper weekday circulation for dailies at 43.7 million, reportedly down from its peak of 63.3 million in 1984.

In this disappointing environment, the big publicly traded newspaper companies all lost circulation, although some did better than others. 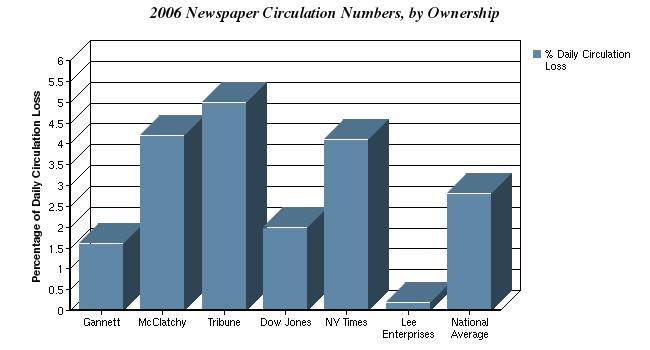 Gannett, by far the largest newspaper group, with a total circulation of 7.2 million, performed better than the national average. The company lost 1.6% of its daily audience for the 93 papers that reported figures to ABC. Underscoring this trend, USA Today, Gannett’s flagship paper and the largest circulation paper in the country, lost only 1.3% of its daily circulation.

The Tribune Co.—under fire from shareholders and contemplating selling off holdings—recorded the steepest declines of the six largest publicly traded companies with a circulation loss of 5%. The Los Angeles Times, whose editor and former publisher have criticized the company’s planned budget cuts, lost a whopping 8.5% of its daily circulation.

The McClatchy Company, now the second-largest newspaper publisher in the country after its acquisition of 20 Knight Ridder papers, lost 4.2% of its daily circulation. While its previously owned papers recorded an average circulation loss of 3.6%, the new former Knight Ridder properties did worse, losing 4.6%.

The New York Times Company lost 4.1% in circulation overall. Its flagship, The New York Times, dropped slightly less than that, 3.2%. The bigger decrease at the Times Co. came from its New England group, which includes the Boston Globe and Worcester Telegram & Gazette. Circulation there fell a collective 7.6%.

Dow Jones, owner of the Wall Street Journal, lost 2% of its daily circulation. However, weekend readership of the Dow Jones papers fell more precipitously, 6.4%, due in part to the 6.7% slip in the circulation of the Journal’s weekend edition. (It’s now at 1.95 million down from 2.39 million a year ago).

One of the better performing newspaper companies was Lee Enterprises, which owns 53 small local papers. Lee circulation was basically unchanged, down just .2% from a year earlier. That is in keeping with the general pattern that smaller community newspapers focusing on local news have been less susceptible to the circulation problems besetting the larger metro dailies.

Despite the downward trend line, the news for the industry may be more nuanced than it seems at first glance. Some papers did post circulation increases, including the two big tabloids, the New York Post and Daily News. Some of the circulation drops, according to analysts, also still reflect papers getting rid of inflated discount and third party sales. Thus the new numbers are more accurate.

Third, an increasing number of people in the industry say traditional circulation numbers are only one part of an accurate measure of newspaper readership. The solution they are promoting is something that combines both print and growing online audiences. This new metric, often called the Total Audience, shows that online consumers add tens of thousands of new readers to the average paper’s readership. If this becomes an accepted way of counting readers, both Wall Street and the advertising community may find newspapers to be a more attractive business.

For now, however, the semi-annual release of the ABC reports continues to be a pretty grim event.

A Closer Look at Plunging Circulation
Why U.S. Newspapers Suffer More than Others
The Search for a New Business Model
Coronavirus-Driven Downturn Hits Newspapers Hard as TV News Thrives