When it’s over, 2006 could be remembered as the year the newsweeklies stopped tinkering around the edges and began implementing bigger changes.

Time and Newsweek both have new editors. Newsweek chose a 30-something to guide it’s future. Time’s incoming boss made an immediate impact announcing that, starting January, the magazine will hit the newsstands on Friday instead of Monday.

The change comes at difficult times. Advertising is lackluster. Both Time and Newsweek suffered double-digit declines in ad pages in 2005, and things haven’t bounced back the way they would like in 2006. Through August of this year, Time’s pages are up 5% compared to the first eight months of 2005, due in part to Time/Warner’s ability to sell ad packages to its many magazines. But Newsweek’s pages are down .3%. U.S. News & World Report has seen a slim 2% gain. 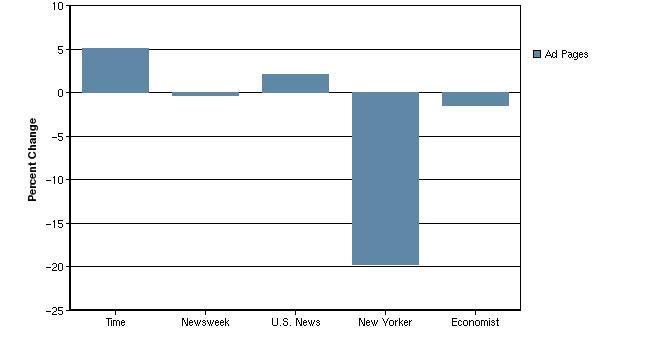 And it’s not just the traditional newsweeklies that are hurting. The high-end New Yorker, a literary magazine closely tied to the news, is experiencing a difficult 2006. Despite reader growth that has built the magazine’s circulation past the one million mark, ad pages are down 19.7% through August. It’s possible the magazine is feeling the loss of former publisher David Carey, who owner Conde Nast moved to oversee Folio, its new business title.

The New Yorker may be suffering from a more pronounced version of the same problems facing other general-interest newsweeklies. When the economy softens, advertisers often look for more targeted audiences for their dollars – such as auto magazines or travel titles. “All general magazines face this problem when the economy is shakier,” says Martin Walker, an industry analyst and chairman of Walker Communications.

There is a also a feeling that more seismic shifts are underway, as evidenced by the other changes being implemented or contemplated by the newsweeklies, Walker says.

For instance, recent news accounts reported that Time is considering significantly shrinking its “rate base” – the circulation magazines guarantee to advertisers – by as much as a quarter, bringing it in line with Newsweek and its rate base of 3 million. There is even speculation that Time may drop the rate base concept completely.

Maintaining readership at that level is an expensive proposition, and magazine publishers generally think circulation is overvalued because it doesn’t measure subscription renewals or loyalty of readers. Other magazines have stopped promising advertisers a base circulation, but never one with Time’s reputation or history.

Stengel’s first move was a bold one, the announcement that in January, Time would abandon its traditional Monday delivery date to hit the newsstands on Friday. That decision is reportedly part of a larger reorganizing effort at Time that is expected to shift considerably more emphasis to the magazine’s web site.

Stengel in interviews has maintained that the new schedule will put Time “ahead of the news cycle.” It also means the magazine will come out on the day most consider the end of the week’s news cycle and the day it originally landed on the newsstands under Henry Luce, when the magazine was more of a capsule of the world’s events for the week.

It is probably not lost on Stengel, an Oxford graduate who knows the culture from which The Economist comes, that by moving to Friday, Time will be coming out the same day as the British weekly. In the past 10 years, as the weeklies have lost hundreds of thousands of subscribers, The Economist’s North American circulation has doubled, to more than 600,000 subscribers.

The Economist actually bares some resemblance to Time as Luce imagined it two generations ago, a magazine which rarely breaks news but focuses on current events and offers in-depth analysis of international affairs without bylines. Stengel hasn’t yet indicated where he is going to take the content of the magazine, but if he looks to The Economist as a model he might actually be taking Time back to the future.