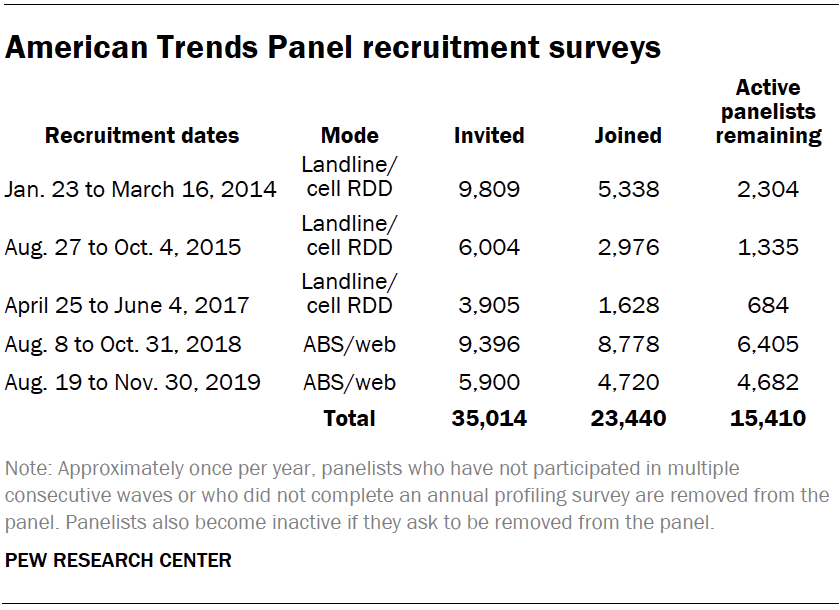 Data in this report is drawn from the panel wave conducted July 13 to July 19, 2020. A total of 10,211 panelists responded out of 12,981 who were sampled, for a response rate of 79%. No panelists were removed from the data due to extremely high rates of refusal or straightlining. The cumulative response rate accounting for nonresponse to the recruitment surveys and attrition is 4.3%. The break-off rate among panelists who logged on to the survey and completed at least one item is 1%. The margin of sampling error for the full sample of 10,211 respondents is plus or minus 1.5 percentage points.

This study featured a stratified random sample from the ATP. The sample was allocated according to the following strata, in order: tablet households, Mexican-born Hispanics, U.S.-born Hispanics, other foreign-born Hispanics, Cuban-born Hispanics, non-internet, high school education or less, not registered to vote, nonvolunteers, people ages 18 to 34, non-Hispanic Black adults, and all other categories not already falling into any of the above.

The U.S. Postal Service’s Delivery Sequence File has been estimated to cover as much as 98% of the population, although some studies suggest that the coverage could be in the low 90% range.7 The American Trends Panel never uses breakout routers or chains that direct respondents to additional surveys. 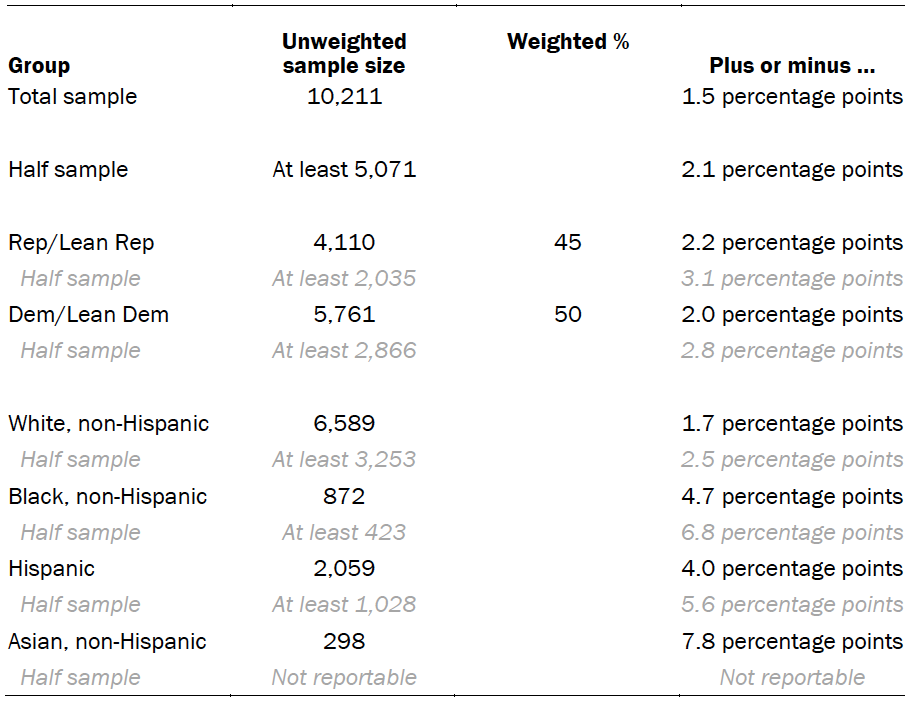 Sample sizes and sampling errors for other subgroups are available upon request. White, Black and Asian adults include those who report being only one race and are non-Hispanic. Hispanics are of any race. Asian adults were interviewed in English only.

A note about the Asian American sample

To create upper-, middle- and lower-income tiers, respondents’ 2018 family incomes were adjusted for differences in purchasing power by geographic region and for household size. “Middle-income” adults live in families with annual incomes that are two-thirds to double the median family income in the panel (after incomes have been adjusted for the local cost of living and for household size). The middle-income range for the American Trends Panel is about $37,500 to $112,600 annually for a three-person household. Lower-income families have incomes less than roughly $37,500, and upper-income families have incomes greater than roughly $112,600.

Based on these adjustments, among respondents who provided their income and household size, 32% are lower income, 43% are middle income and 20% fall into the upper-income tier.