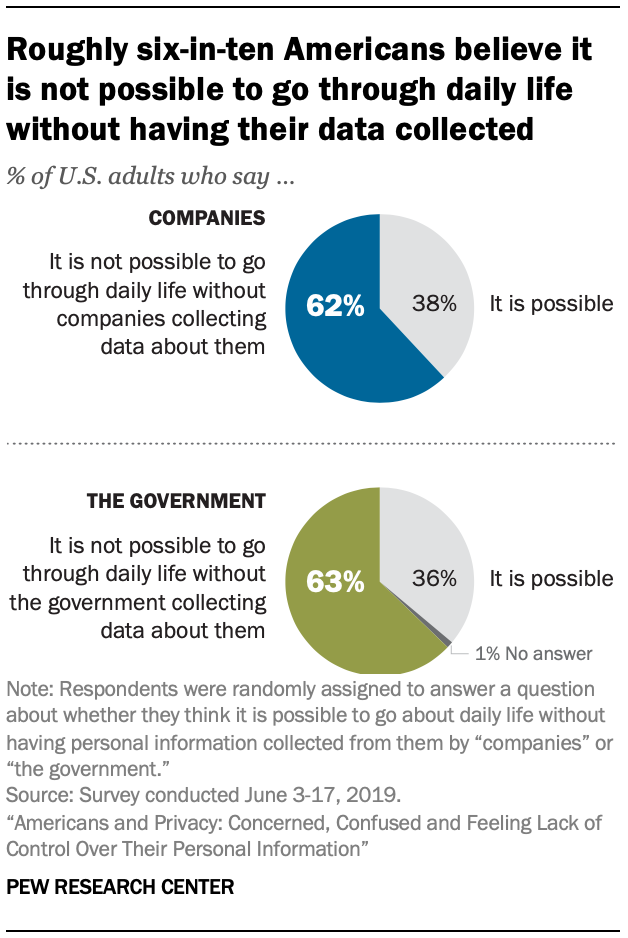 A majority of Americans believe their online and offline activities are being tracked and monitored by companies and the government with some regularity. It is such a common condition of modern life that roughly six-in-ten U.S. adults say they do not think it is possible to go through daily life without having data collected about them by companies or the government. 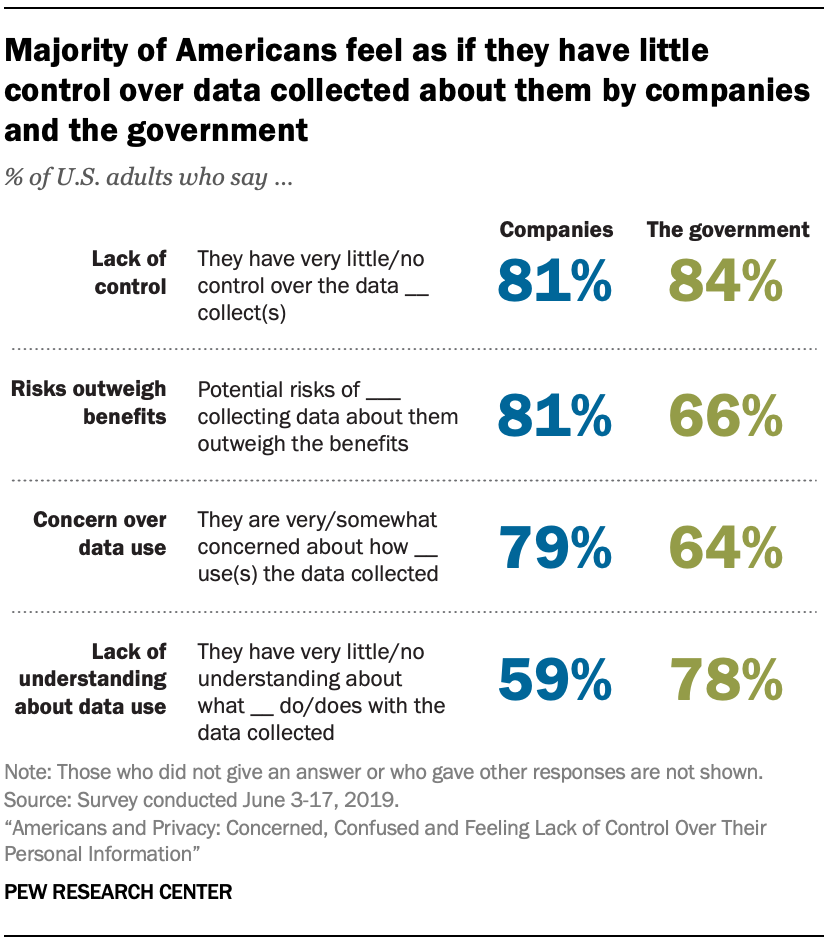 Data-driven products and services are often marketed with the potential to save users time and money or even lead to better health and well-being. Still, large shares of U.S. adults are not convinced they benefit from this system of widespread data gathering. Some 81% of the public say that the potential risks they face because of data collection by companies outweigh the benefits, and 66% say the same about government data collection. At the same time, a majority of Americans report being concerned about the way their data is being used by companies (79%) or the government (64%). Most also feel they have little or no control over how these entities use their personal information, according to a new survey of U.S. adults by Pew Research Center that explores how Americans feel about the state of privacy in the nation.

Several of the queries of this survey focus on public perceptions of what “the government” does related to personal data. For instance, respondents were asked: “As far as you know, how much of what you do online or on your cellphone is being tracked by the government?” Related questions focused on people’s attitudes about the data the government collects about them.

It is difficult to determine how much personal data the government collects and otherwise can access through private company records. Administrative government agencies like the IRS, Census Bureau, Postal Service and social welfare departments gather various personal details about people. That includes their tax- and employment-related information, physical attributes if they get a government ID, financial circumstances if they get benefits from social, housing and employment training programs, health information if they participate in government health-insurance programs, addresses, household composition, property ownership if they own houses or cars and educational details if they get student loan or grant, for example. This list is not exhaustive.

Beyond that, national security organizations like the National Security Agency have authority to monitor phone traffic and people’s movements. With subpoenas or court orders and warrants, law enforcement organizations can typically access and monitor people’s phone and traffic records, health records (including genetic records), online and app browsing, search queries, texts and emails. Users’ social media activities and their tech-based social networks are at least at times examined in investigations, according to “transparency reports” released by the companies.

It is important to note, that there are often limitations on the ways government agencies can share what they know with others, including those in other parts of the government.

There is also a collective sentiment that data security is more elusive today than in the past. When asked whether they think their personal data is less secure, more secure or about the same as it was five years ago, 70% of adults say their personal data is less secure. Only 6% report that they believe their data is more secure today than it was in the past.

There is also a general lack of understanding about data privacy laws among the general public: 63% of Americans say they understand very little or nothing at all about the laws and regulations that are currently in place to protect their data privacy.

These findings point to an overall wariness about the state of privacy these days, but there are some circumstances where the public sees value in this type of data-driven environment. For example, pluralities of adults say it is acceptable for poorly performing schools to share data about their students with a nonprofit group seeking to help improve educational outcomes or for the government to collect data about all Americans to assess who might be a potential terrorist.

These findings come from a survey of 4,272 U.S. adults conducted on Pew Research Center’s American Trends Panel between June 3-17, 2019.

Here are some of the key takeaways: 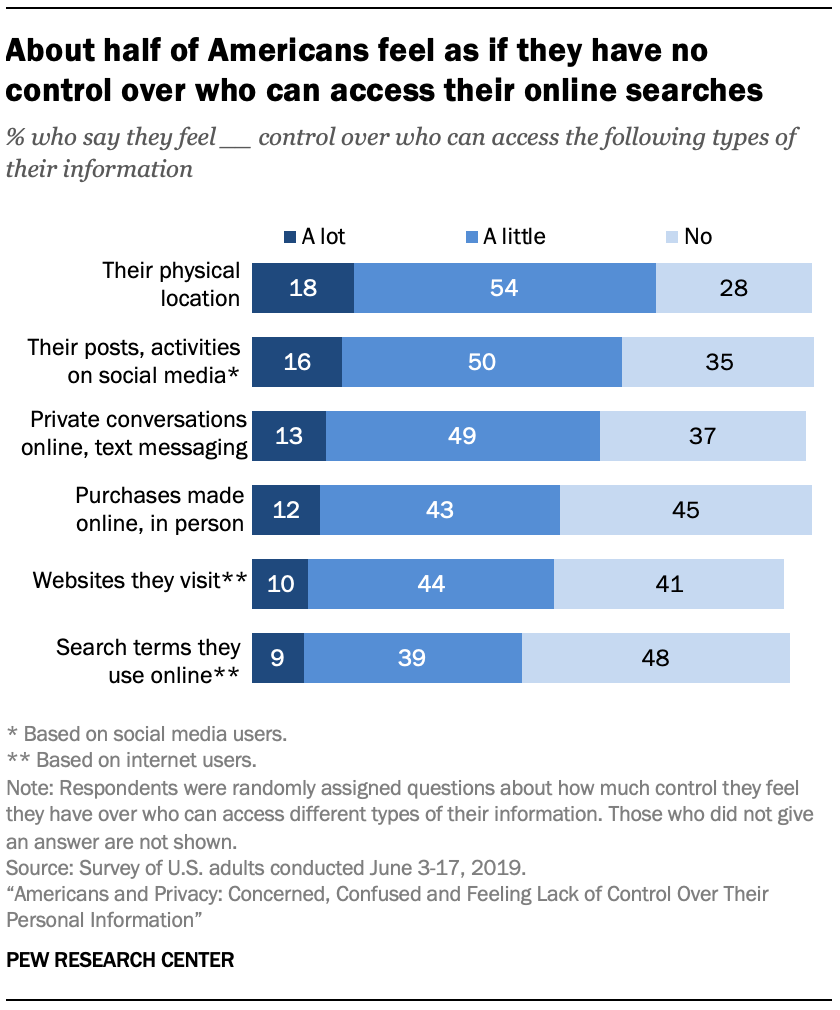 Not feeling in control of personal data: Roughly eight-in-ten or more U.S. adults say they have very little or no control over the data that government (84%) or companies (81%) collect about them.

When it comes to different kinds of information, the picture varies by the specific type. While relatively few Americans feel as if they have a lot of control over who has access to everything from their physical location to their social media posts, there are experiences in which some Americans especially feel a lack of control. Roughly half of Americans (48%) say they feel as if they have no control over who can access the search terms they use, and 41% say the same about the websites they visit. By comparison, a smaller share of the public feels as if they do not have control over who can access their physical location.

One aim of the data collection done by companies is for the purpose of profiling customers and potentially targeting the sale of goods and services to them based on their traits and habits. This survey finds that 77% of Americans say they have heard or read at least a bit about how companies and other organizations use personal data to offer targeted advertisements or special deals, or to assess how risky people might be as customers. About 64% of all adults say they have seen ads or solicitations based on their personal data. And 61% of those who have seen ads based on their personal data say the ads accurately reflect their interests and characteristics at least somewhat well. (That amounts to 39% of all adults.)

Data collection and sharing for specific purposes: Despite their broad concerns about data collection and use by companies and the government, pluralities of U.S. adults say it is acceptable for data to be used in some ways. For instance, by a 49%-27% margin, more Americans find it acceptable than unacceptable for poorly performing schools to share data about their students with a nonprofit group seeking to help improve educational outcomes. Similarly, 49% say it is acceptable for government to collect data about all Americans to assess who might be a potential terrorist threat. That compares with 31% who feel it is unacceptable to collect data from all Americans for that purpose.

On the other hand, more find it unacceptable than acceptable for social media companies to monitor users’ posts for signs of depression so they can identify people who are at risk of self-harm and connect them to counseling services (45% vs. 27%). The same pattern arises when it comes to companies that make smart speakers sharing audio recordings of customers with law enforcement to help with criminal investigations: 49% say this it is unacceptable, while 25% find it acceptable.

The public is more evenly divided when it comes to the acceptability of fitness tracking app makers sharing user data with medical researchers to better understand the link between exercise and heart disease. 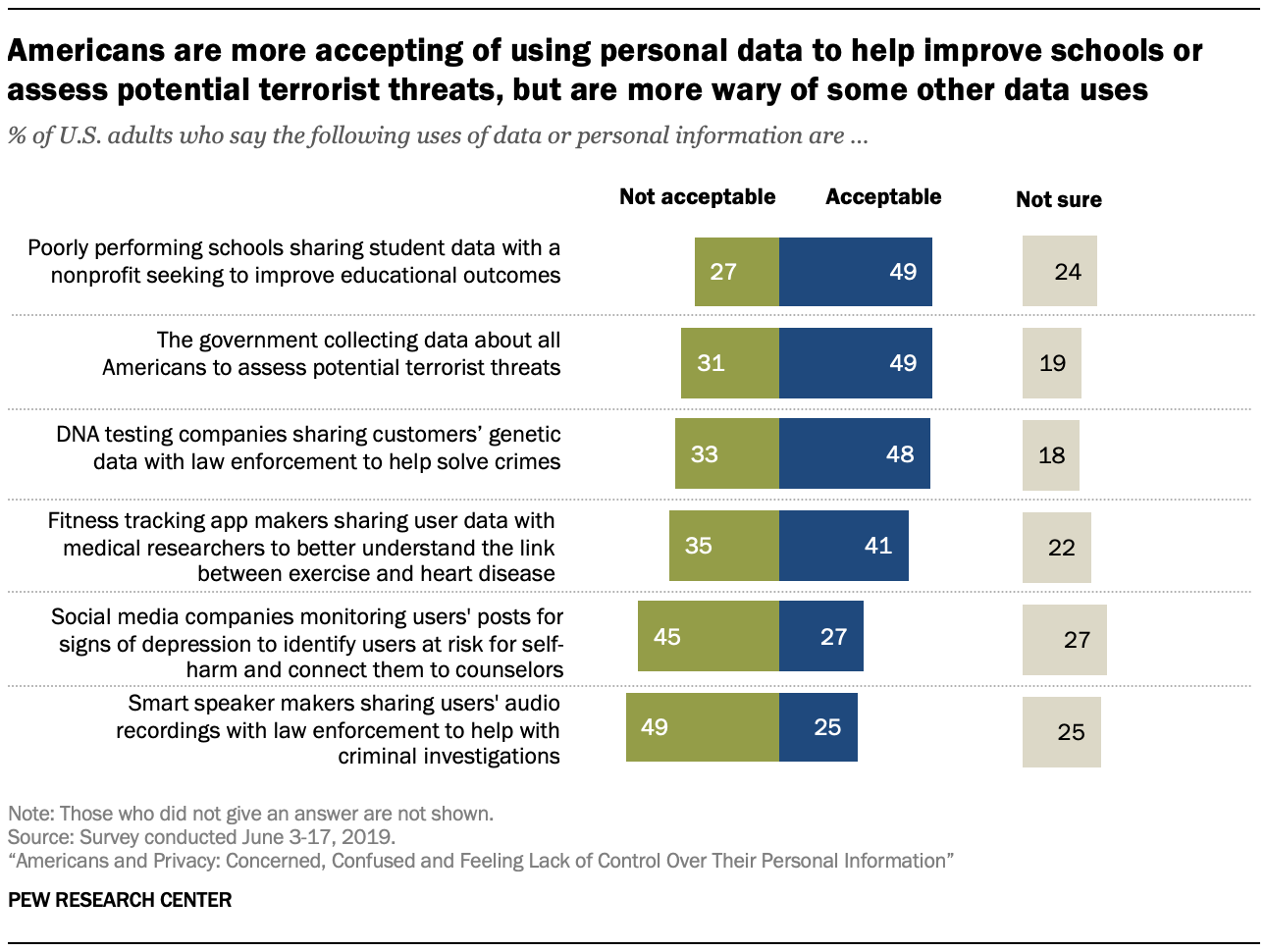 Concern about how data is used: 79% of adults assert they are very or somewhat concerned about how companies are using the data they collect about them, while 64% say they have the same level of concern about government data collection.

Still, the majority of Americans are not confident about the way companies will behave when it comes to using and protecting their personal data. Roughly seven-in-ten or more say they are not too or not at all confident that companies will admit mistakes and take responsibility when they misuse or compromise data (79%), will be held accountable by government if they misuse data (75%), or will use customers’ data in ways that people would feel comfortable with (69%). 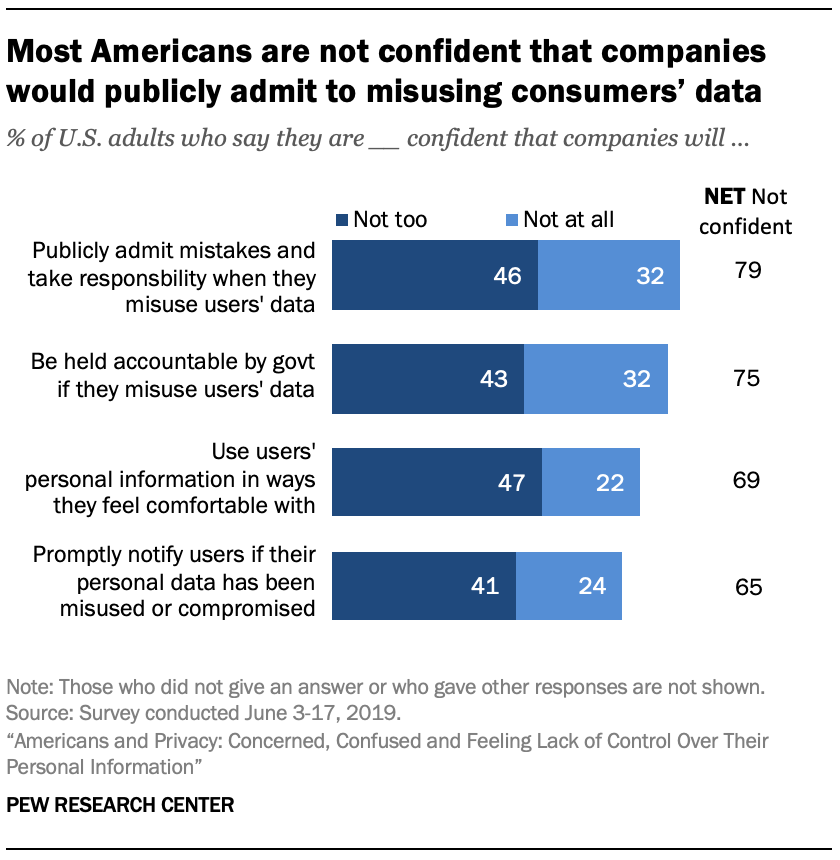 How Americans handle privacy policies: Core parts of the current system of data collection and privacy protection are built on the idea that consumers are given notice about how firms collect and use data and ask for their consent to having their data used that way. Fully 97% say they are ever asked to approve privacy policies, yet only one-in-five adults overall say they always (9%) or often (13%) read these policies. Some 38% of U.S. adults maintain they sometimes read such policies, and 36% say they never read a company’s privacy policy before agreeing to it. In all, about four-in-ten adults say they understand privacy policies great deal (8%) or some (33%).

In addition to the concerns cited above about how companies handle personal data, a majority of Americans (57%) say they are not too confident (40%) or not at all confident (17%) companies follow what their privacy policies say they will do with users’ personal data.

Several other key findings in the survey:

There are some differences by age on some privacy issues: People in different age groups have varying views on some key privacy and surveillance issues. Americans ages 65 and older are less likely than those ages 18 to 29 to feel they have control over who can access things like their physical location, purchases made both online and offline and their private conversations. At the same time, older Americans are less likely to think they benefit from data collection: Just 17% of those 65 and older believing they benefit from the data government collects about them, and only 19% think the same about data collected by companies.

There are also age differences on the issue of how data gets used once obtained. Americans ages 65 and older are more likely than younger adults to say it is acceptable for law enforcement to use customers’ genetic data to help solve crimes, approve data collection to assess terrorist threats, and have smart speaker makers share users’ audio recordings in investigations. By contrast, young adults ages 18 to 29 are more likely than older adults to find acceptable the idea that social media companies monitor users for signs of depression and to allow fitness tracking user data to be shared with medical researchers.

In addition, two-thirds of adults ages 65 and older say they follow privacy news at least somewhat closely, compared with just 45% of those 18 to 29 who do the same.

There are differences by race and ethnicity on some privacy issues: Black Americans are more likely than white Americans to say they believe the government is tracking all or most of what they do online or on their cellphone (60% vs. 43%). Similar gaps are present in views about offline activities: 47% of black adults think all or most of their offline activities are tracked by the government, compared with just 19% of white adults.

In addition, black and Hispanic adults are more likely than white adults to say they are concerned to some degree about what law enforcement officials, employers and family and friends know about them.

When it comes to identity-theft issues, black adults (20%) are roughly three times as likely as their Hispanic (7%) or white counterparts (6%) to say someone has taken over their social media or email account in the past year. Black Americans are also more likely than white and Hispanic adults to say someone attempted to open a line of credit or applied for a loan using their name in the past 12 months.

CORRECTION: In the chart, “Majority of Americans feel as if they have little control over data collected about them by companies and the government,” the explanatory text for the findings related to “Risks outweigh benefits” was transcribed incorrectly. The correct text is, “Potential risks of ___ (companies or the government) collecting data about them outweigh the benefits.”

Next: 1. How Americans think about privacy and the vulnerability of their personal data
← Prev Page
You are reading page1Page2Page3Page4Page5Page6Page7
Next Page →