The analysis of Twitter users in this report is based on a nationally representative survey conducted from Nov. 21 to Dec. 17, 2018, among a sample of 2,791 U.S. adults ages 18 years and older who have a Twitter account and agreed to allow researchers to access that account. The margin of error for the full sample is plus or minus 3.0 percentage points.

All active members of the Ipsos panel with an active Twitter account were eligible for inclusion in this study. In all, 4,829 panelists responded to the survey. Of that group, 3,649 (76%) confirmed that they used Twitter. Among confirmed Twitter users, 3,293 (90%) agreed to provide their Twitter handle and complete the survey. Next, researchers reviewed each account and removed any that were nonexistent or belonged to institutions, products or international entities. This report is based on the remaining 2,791 respondents who both completed the survey and provided a valid handle (76% of confirmed Twitter users).

The final sample of 2,791 adults was weighted using an iterative technique that matches gender, age, race, Hispanic origin, education, region, party identification, volunteerism, voter registration, and metropolitan area to the parameters of the American Trends Panel November 2018 survey of Twitter users. This weight is multiplied by an initial sampling, or base weight, that corrects for differences in the probability of selection of various segments of Ipsos’s sample as well as by a panel weight that adjusts for any biases due to nonresponse and noncoverage at the panel recruitment stage using all of the attributes described above. 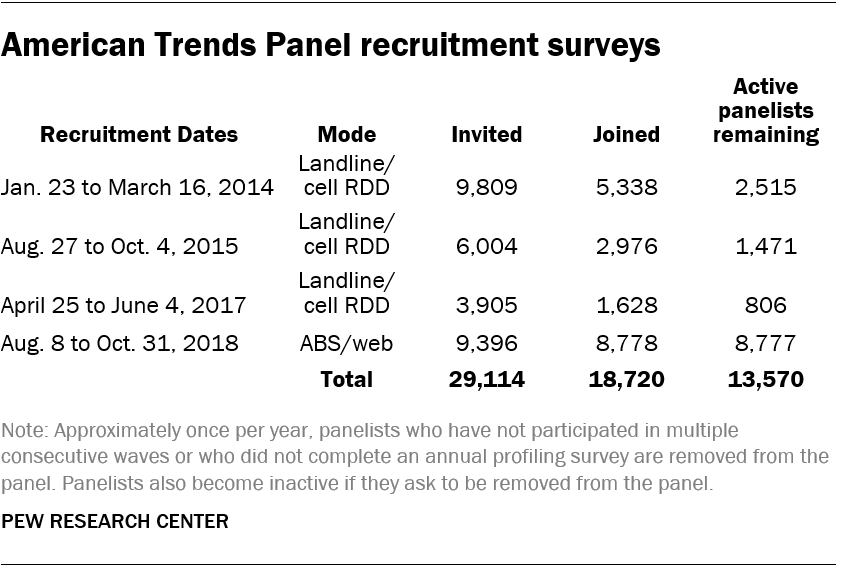 In August 2018, the ATP switched from telephone to address-based recruitment. Invitations were sent to a random, address-based sample (ABS) of households selected from the U.S. Postal Service’s Delivery Sequence File. In each household, the adult with the next birthday was asked to go online to complete a survey, at the end of which they were invited to join the panel. For a random half sample of invitations, households without internet access were instructed to return a postcard. These households were contacted by telephone and sent a tablet if they agreed to participate. A total of 9,396 were invited to join the panel, and 8,778 agreed to join the panel and completed an initial profile survey.

The questions from the ATP that were used in this report were asked on four different waves of the panel, which are fielded roughly once a month. All panel waves were fielded in 2018. Estimates for each question are calculated using the respondents and weights that correspond to the wave in which it was asked. Some items, such as demographics, were measured at recruitment and updated periodically, in which case they do not belong to any individual wave. For these kinds of questions, estimates are based on the respondents and weights from Wave 39.

The field dates and sample sizes for each ATP wave are presented in the table below. Cumulative response rates account for nonresponse to the recruitment surveys and panel attrition in addition to nonresponse to the individual panel waves.

The ATP data were weighted in a multistep process that begins with a base weight incorporating the respondents’ original survey selection probability and the fact that in 2014 and 2017 some respondents were subsampled for invitation to the panel. The next step in the weighting uses an iterative technique that aligns the sample to population benchmarks on the dimensions listed in the accompanying tables.

Sampling errors and statistical significance tests take into account the effect of weighting. Interviews are conducted in both English and Spanish, but the American Trends Panel’s Hispanic sample is predominantly U.S. born and English speaking. 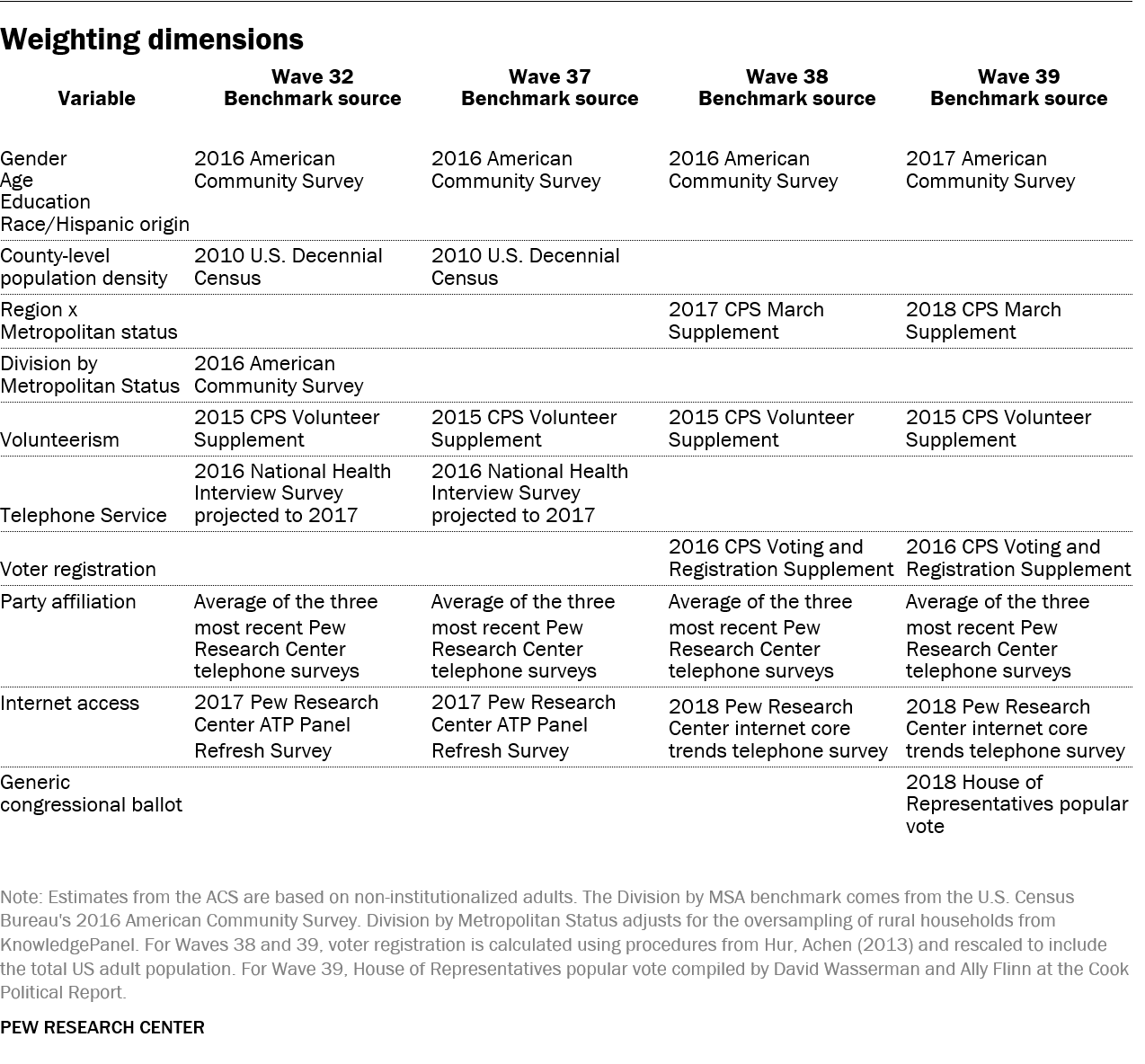 Examining a small group of high-volume tweeters – the technique used in the body of this report – does not capture the broader set of activities that may define highly engaged users – such as following, liking and being followed by others. To better understand engaged users in general, and to ensure that the picture drawn by the behavior of heavy tweeters was broadly resonant with a more nuanced definition of engagement, researchers used a clustering model based on an array of behaviors to classify all respondents’ accounts into two groups: light users (who tweet less, follow less, like less and have fewer followers) and heavy users (who are more engaged on all these dimensions). 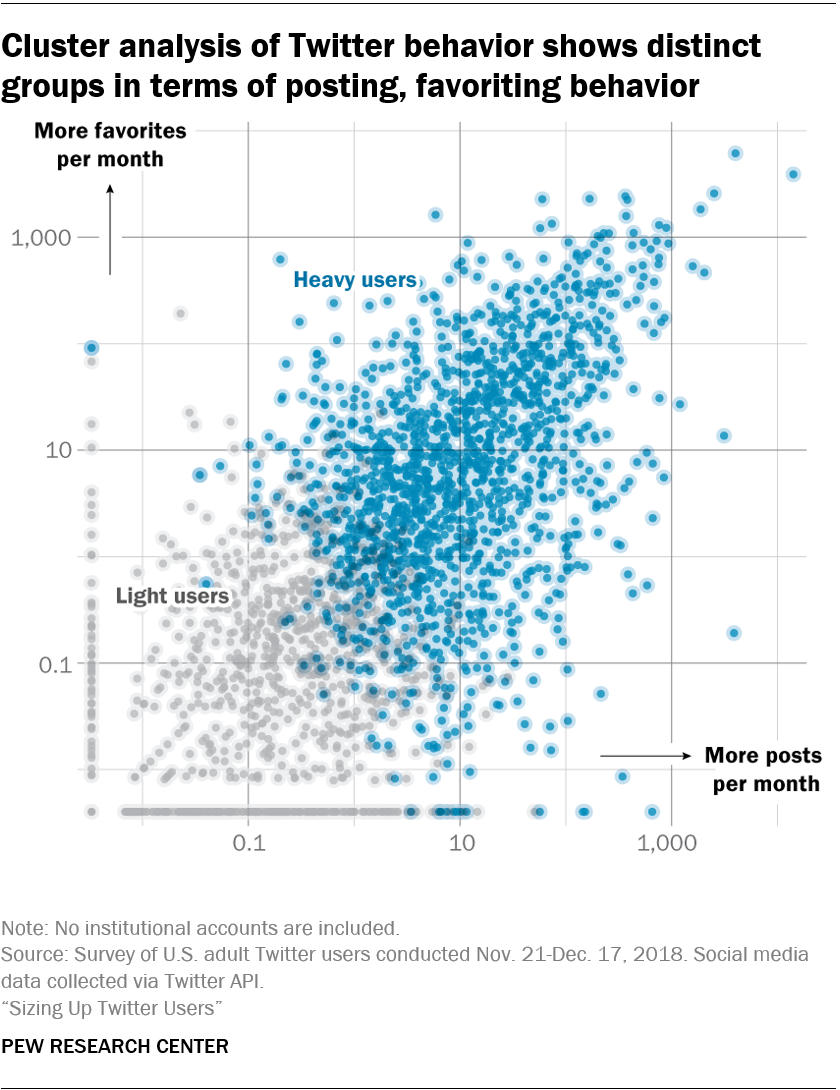 The research team used a technique called K-means clustering to identify highly active users using this broader set of measures. The method takes a set of variables and a predetermined set of clusters and classifies users into groups based on whether a given user’s behavior is most similar to the mean of one cluster or another.

The cluster model used as inputs:

Researchers took the log of each of the above variables and fit a K-means model to classify users into groups. Using this technique, they classified 60% of Twitter users as heavy users and 40% as light users. The heavy user cluster showed a higher correlation across all the input variables relative to the light users cluster. Researchers tested alternative clustering models and increased the cluster size to three, but this created an additional very small group of users without distinctive behavioral patterns.

Unsurprisingly, heavy users are more likely to report using Twitter frequently in daily life than those labeled as light users, but the top 10% of users by tweet volume still eclipse them by a substantial margin, with 61% of heavy users saying they use the site daily, compared with 33% of light users. And 81% of the top 10% of tweeters by volume say they use the platform daily.

Similar to top 10% tweeters, heavy users are also more likely to be women (52% compared with 46% for light users). The study also finds that 65% of users in the top 10% by tweet volume are women.