This particular survey featured interviews with 1,058 parents who belong to the panel and have a teen ages 13 to 17, as well as interviews with 743 teens. Parents who have multiple teenage children were asked to provide information about each of these teens. The panel randomly selected one of these teens, and parents were instructed to respond to all survey questions with this teen in mind. Interviews were conducted online and by telephone from March 7 to April 10, 2018.

Study-specific base sampling weights are derived using a combination of the final panel weight and the probability of selection associated with the sampled panel member. Since not all sampled panel members respond to the survey interview, an adjustment is needed to account for and adjust for survey nonrespondents. This adjustment decreases potential nonresponse bias associated with sampled panel members who did not complete the survey interview for the study. Thus, the nonresponse-adjusted survey weights for the study were adjusted via a raking ratio method to general population totals associated with the following socio-demographic characteristics: age, sex, education, income, race/Hispanic ethnicity and census division for the parent respondents, and the following socio-demographic characteristics for the teen respondents: age, sex, race/Hispanic ethnicity, highest level of education associated with teen’s parents and census division associated with the teen’s household. The weights adjusted to the 2017 March Current Population Survey population totals are the final study weights, which were used to produce the estimates in this report. 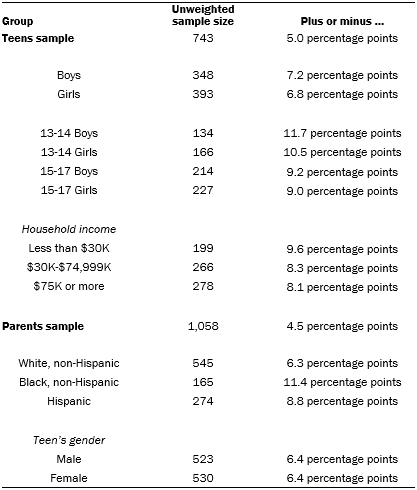 Q&A: How and why we studied teens and cyberbullying
Cyberbullying
Teens, Technology and Romantic Relationships
Teens, kindness and cruelty on social network sites
Teens, Privacy and Online Social Networks