From getting news to playing games to reading a book, Americans now have a plethora of devices to choose from in order to meet their technology-based needs. For each type of device, the demographic makeup of owners can vary widely, so this section looks at these differences.

The rise of the smartphone has had a major social, political and cultural impact. It has changed the way people reach their friends, obtain data and media, and share their lives. Fully 68% of adults now have a smartphone, nearly double the share that Pew Research Center measured in its first survey on smartphone ownership in mid-2011. At that point, 35% of adults had smartphones.

More than half of most demographic groups have a smartphone. Only those ages 65 and older (30% of whom own smartphones) and those who do not have a high school education (41% own smartphones) fall below majority ownership. On the other hand, those ages 18 to 49 and those in higher-income households are coming closer and closer to saturation adoption. There are no differences in smartphone ownership among different racial and ethnic groups.

Cellphones near saturation levels for some groups

Fully 92% of American adults own a cellphone, which is similar to the 90% of the public who reported owning these mobile devices in 2014. Although cellphones are common today, the share of adults who own one has risen substantially since 2004, when 65% of Americans owned a mobile phone.

Cellphone ownership is common across all major demographic groups, though older adults tend to lag behind their younger counterparts. Some 78% of adults ages 65 and older own a cellphone, compared with 98% of 18- to 29-year-olds. Lower-income adults are less likely to own a cellphone. Rural residents are slightly less likely than urban and suburban residents to have cellphones. Still, nearly nine-in-ten rural residents (87%) have them.

Close to half of all Americans own a tablet 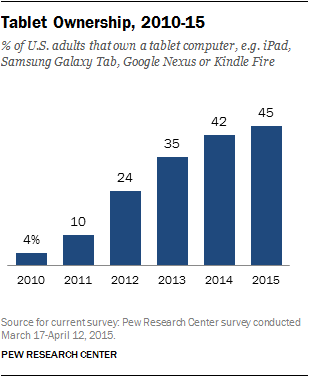 The share of Americans who own a tablet computer has risen tenfold since 2010. Today, 45% of U.S. adults own a tablet – a substantial increase since Pew Research Center began measuring tablet ownership in 2010. Then, only 4% of adults in the U.S. were tablet owners. Ownership, however, is statistically the same as it was in 2014.

Tablet ownership varies across a number of demographic groups. Younger adults and those from more affluent backgrounds are more likely to own the devices, and differences tied to educational attainment are particularly pronounced: 62% of college graduates have a tablet, compared with 35% of those with a high school diploma and 19% who have not completed high school. Additionally, whites are more likely than Hispanics to own a tablet computer, while tablet ownership among blacks is not statistically different from that of whites or Hispanics.

Some 19% of adults report owning an e-reader – a handheld device such as a Kindle or Nook primarily used for reading e-books. This is a sizable drop from early 2014, when 32% of adults owned this type of device. Ownership of e-readers is somewhat more common among women (22%) than men (15%). Whites are more likely than blacks and Hispanics to own an e-reading device, while ownership also tends to be higher among those who are more affluent and those with more education.

Desktop or laptop computers are where they were 10 years ago

Ownership for traditional computers has remained stable. Some 73% of U.S. adults own a desktop or laptop computer. This figure has fluctuated a bit in Pew Research findings over the years, but the 2015 finding is roughly similar to computer ownership levels of a decade ago – though slightly down from a high in 2012, when 80% of Americans said they had a desktop or laptop.

College graduates and those from higher-income households are particularly likely to own a computer. There are also differences based on age as well as race and ethnicity, with younger groups more likely than their older counterparts to report owning a laptop or desktop, and whites (79%) more likely than Hispanics (63%) and blacks (45%) to own one.

Game console ownership is where it was in 2010

There are also differences by educational attainment – 54% of adults who have some college experience own a game console, a higher share than college graduates (37%), high school graduates (35%) and those who have less than a high school diploma (21%). Younger adults are also more likely than their elders to own a game console, while there are no differences based on gender or race and ethnicity.

MP3 players still have an audience

While MP3 player ownership grew rapidly in the mid-2000s, the percentage of Americans who own one has not changed significantly in recent years.

The percentage of Americans who own an iPod or another brand of MP3 player has changed little since 2013 (the last time Pew Research polled on ownership of this device). Today, 40% of U.S. adults have an iPod or other MP3 player; in 2013, that share was 43%. While there are no differences based on gender or race and ethnicity, ownership does vary by age, education and household income. Older Americans are especially unlikely to own an MP3 player – only 13% have this type of device.

Next: About This Report
← Prev Page
Page1You are reading page2Page3Page4
Next Page →

Technology Device Ownership: 2015
The Demographics of Device Ownership
Smartphone ownership continues to growCellphones near saturation levels for some groupsClose to half of all Americans own a tabletPopularity of e-readers declinesDesktop or laptop computers are where they were 10 years agoGame console ownership is where it was in 2010For portable gaming devices, it’s still 2009MP3 players still have an audience
About This Report Methods