Social media is broadly viewed as a source of useful information and as one tool in parenting toolkits. Mothers use social media as a parenting resource slightly more often than fathers.

More than three-quarters (79%) of parents who use social media agree that they get useful information from their social media networks, including 32% who “strongly agree,” a proportion similar to that of all social media users (75%) and non-parents. 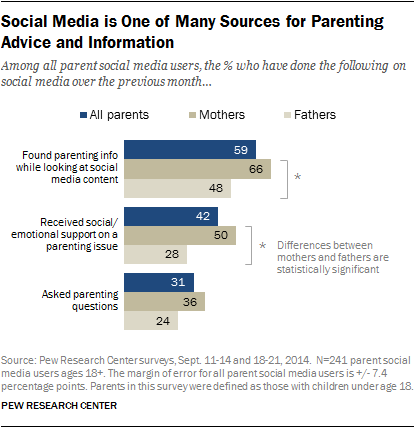 While parents are avid users of social media, not all seek it out as a primary parenting resource.

Parents who use social media were asked about the advice they seek, the useful parenting information they come across while looking at other content and the emotional support they receive via social media.20

59% of parents have come across useful information about parenting while looking at social media in the last month.

Parents living in households with an annual income of less than $50,000 are somewhat more likely to come across useful parenting advice with greater frequency –10% do so “frequently” compared with 4% of higher-income parents on social media. Conversely, affluent parents are more likely to say they “hardly ever” come across useful parenting information – 37% say so compared with 15% of less-affluent parent social media users.

42% of social-media-using parents received social or emotional support around a parenting issue on social media in the last month.

Previous studies have shown that while social media is certainly a source of support, support is not always a primary motivation for many users who participate in these networks online. Some 23% of Facebook users said receiving support from people in their network is a “major” reason they use the site. Other benefits, like sharing photos and seeing humorous content, were more frequently cited.21

About a third of social-media-using parents have asked a parenting question of their social media networks in the last month.

Some parents on social media ask questions of their networks about parenting issues, but they do not do so frequently. Overall, 31% of parents had asked parenting questions of their online social networks over the previous month. Just 3% asked such questions “frequently,” while another 10% did so “sometimes” and 18% said they “hardly ever” did this. Fully 69% of parents on social media said they “never” asked questions about parenting over the past 30 days. There are no significant differences between demographic groups.

Next: Concerns about children, social media and technology use
← Prev Page
Page1Page2Page3Page4You are reading page5Page6Page7Page8Page9
Next Page →