One-in-three parents say they have had concerns or questions about their child’s technology use in the last year.

Previous research about teenagers and technology shows that parents of teens are both supportive and wary of their child’s use of the internet, social media, and cell phones.22 Many also take an active role in monitoring their teen’s online behavior and engaging in conversations about what is and is not appropriate to share online.23

Most parents say they have not felt uncomfortable about the information posted about their child by others online; few have requested content be removed.

Parents of younger children tend to be a bit more sensitive about the content that is posted about their child. Among parents who only have children age 11 or younger, 14% say they have ever felt uncomfortable about something a spouse, family member, or friend posted about their child on social media. This compares with 3% of parents who only have children age 12 and older. There were no other significant differences by demographic group.

However, when parents do feel uncomfortable, many are likely to ask the poster to remove the offending content. Overall, 11% of parents have ever asked a family member, caregiver, or friend to take something about their child down from social media.

Given the ubiquity of Facebook and its status as the most popular social networking site, this survey took a deeper dive into the interactions and characteristics that make up users’ networks, revealing where parents’ networks are similar and different compared with non-parents.

Parents 25 on Facebook have a median of 150 friends, while non-parents typically have 200 Facebook friends. Digging into the data, the largest group of parents on Facebook (42%) has between 0 and 100 friends on the network. Another 20% of parents say they have between 101 and 250 friends, while 23% have between 251 and 500 friends. There are no statistically significant differences between parents and non-parents at these levels.

When looking at those with more than 500 Facebook friends, however, non-parents are more likely to have the largest networks. Some 16% of non-parents on Facebook say they have more than 500 Facebook friends, compared with 11% of parents on Facebook. There are no statistically significant differences in the size of Facebook networks between parent demographic groups like age, gender, income, and education level.

Facebook networks are composed of a variety of people, not all of whom are necessarily considered close. Facebook users were asked how many of their friends on the platform they considered “actual friends.”

There were no demographic differences in the number of “actual” friends on Facebook between parents by age, gender, income, or education level. 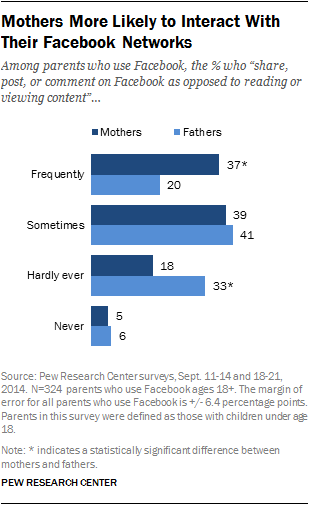 Mothers are significantly more likely than fathers to engage with others on Facebook – 76% do so “frequently” or “sometimes” compared with 61% of fathers who say the same. Some 37% of mothers share, post, or comment “frequently,” which is substantially higher than the 20% of fathers who do so. Fathers are more likely to “hardly ever” or “never” share content – 39% report this compared with 24% of mothers.

Family and friends new and old are the most common types of connections in users’ Facebook networks. Fully 93% of parents on Facebook say they are friends with family members other than their parents and children, while 88% each say they are connected with current friends and friends from the past, such as high school or college classmates. Six-in-ten parents on Facebook are friends with their work colleagues. 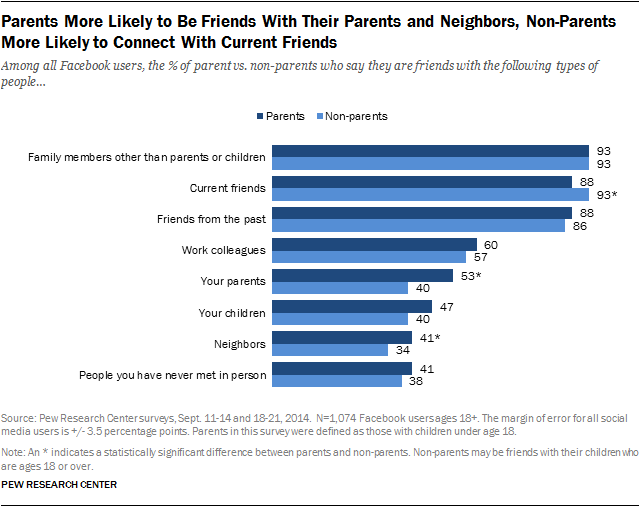 Younger parents on Facebook (those under age 40) are more likely to be connected with friends from the past on Facebook (93% vs. 83% of parents ages 40 and older). This is likely because Facebook users and social media users in general tend to be younger, so connections may be easier to find. Younger parents also are more likely to be Facebook friends with their own parents (71% vs. 35%), again likely a factor of age.

Next: About This Report
← Prev Page
Page1Page2Page3Page4Page5You are reading page6Page7Page8Page9
Next Page →