The PSRAI September 2014 Omnibus Weeks 2 and 3 obtained telephone interviews with a nationally representative sample of 2,003 adults living in the continental United States. Telephone interviews were conducted by landline (1,002) and cell phone (1,001, including 594 without a landline phone). The survey was conducted by Princeton Survey Research Associates International (PSRAI). Interviews were done in English and Spanish by Princeton Data Source from September 11 to 14, 2014 and September 18 to 21, 2014. Statistical results are weighted to correct known demographic discrepancies. The margin of sampling error for the complete set of weighted data is ± 2.5 percentage points.

The margins of error for key demographic groups cited in this report are represented in the table below: 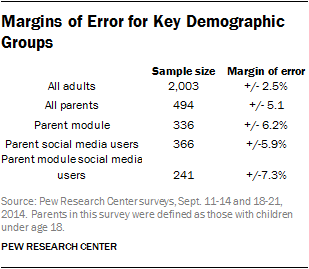 Note on the “actual Facebook friends” question included in the survey: Although many researchers use a measure of “total Facebook friends,” Ellison et al. (2011) introduced an additional measure called “Actual Friends.” Participants were asked to report their total number of Facebook Friends and what proportion of these Friends were considered ‘actual’ friends. The creators of these questions intentionally did not specify what ‘actual friends’ meant in order to tap into individual understandings of friendship.