The backdrop for this lack of confidence in communications security is low levels of trust in key sectors that Americans associate with data collection and monitoring. While the surveillance practices of government agencies have been the focus of many public discussions and debates post-Snowden, previous research from the Pew Research Center’s Internet Project has suggested that Americans are also concerned about data collection by advertisers. Additionally, public concern over the amount of personal information businesses are collecting has been growing. 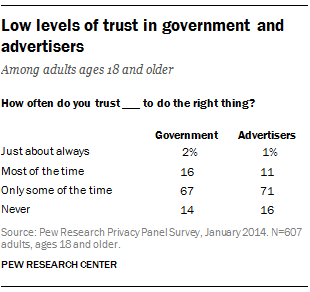 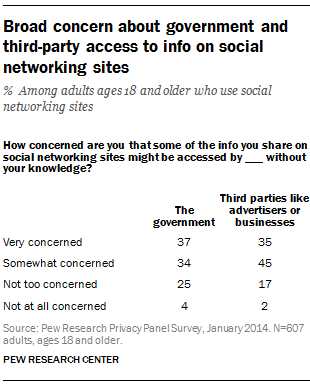 Beyond social networking sites, Americans express a broader loss of control over the way their personal data is managed by companies. Fully 91% of adults “agree” or “strongly agree” that “consumers have lost control over how personal information is collected and used by companies.” This includes 45% who “strongly agree” and 46% who “agree” that consumers have lost control. Another 6% “disagree,” while only 1% “strongly disagree” with this sentiment.

Those with a college education are more likely than those who have not attended college to “strongly agree” that consumers have lost control, 51% vs. 40%.

Respondents who are more aware of government surveillance programs also express a greater loss of control over how their personal information is collected and used by companies. Those who said they had heard a lot were more likely to “strongly agree” with a loss of control over their personal information compared with those who had heard “a little” or “nothing” about surveillance programs (58% vs. 37%).

Support for more regulation of advertisers is consistent across an array of demographic groups. However, those who have a college education are more likely than those who have not attended college to support more government intervention (69% vs. 58%).

Next: Americans Consider Certain Kinds of Data to be More Sensitive than Others
← Prev Page
Page1Page2Page3Page4You are reading page5Page6Page7Page8Page9
Next Page →