To better understand how the public thinks about privacy, a representative sample of 607 adults were asked an open-ended question in an online survey: “When you hear the word “privacy,” what comes to mind for you?”7 The responses that followed were striking in their variance, ranging from one-word entries to lengthier descriptions that touched on multiple concepts.

Once the responses were coded, a set of key words and themes emerged as the most frequently referenced and top-of-mind for the general public. Each of the top ten themes was referenced in at least 5% of the total responses. However, a full 22% of the responses referenced some other theme that was mentioned only a handful of times or was entirely unique.

A large segment of the responses associated privacy with concepts of security, safety and protection

For many Americans, privacy is closely associated with references to security.8 Even as “privacy” and “security” signal distinct sectors of technological development and legal protections, these concepts are often blurred and overlapping for the general public. Among all of the themes referenced in the open-ended responses to the online survey, security, safety and protection was the most frequently-referenced category; 14% of the responses used these phrases in some form. Respondents associated privacy with the “security of personal information” or as something that “must be protected.” And among the most common one-word responses were simply the words “secure” and “security.”

In online focus groups, smaller groups of respondents from the survey were asked specifically about the way they think about privacy versus security online. In many cases, respondents viewed the terms as interchangeable:

Q: Is there any difference in the way you think about privacy and security online?

“I think it’s pretty much the same.”

“Not to me, that is pretty much the same thing.”

However, some participants viewed the concepts as more distinct, with security signaling issues around personal safety, financial matters and protection from external threats online:

“Privacy is keeping something from someone, security is having the confidence that things or you [are] going to be ok.”

“In my mind, privacy deals more on the side of personal issues while security deals with financial issues.”

“Security to me means a firewall, a secure sight and a good filter on your computer. Privacy is more like photos, and personal info.”

Other common themes that emerged from the open-ended responses were clustered around privacy as:

Most have heard at least a little about government surveillance 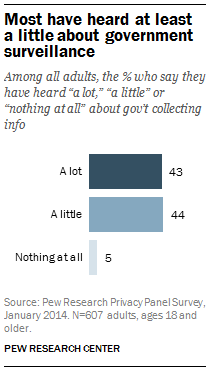 Beyond specific references to government surveillance programs in the adults’ associations with the word “privacy,” almost all of the participants in our online panel said that they have heard at least something about “the government collecting information about telephone calls, emails, and other online communications as part of efforts to monitor terrorist activity.” And those who have heard the most about the government disclosures are more privacy sensitive across an array of measures in the survey.9

Some 43% of adults have heard “a lot” about this government surveillance, and another 44% had heard “a little.” Just 5% of adults in our panel said they had heard “nothing at all” about these programs. 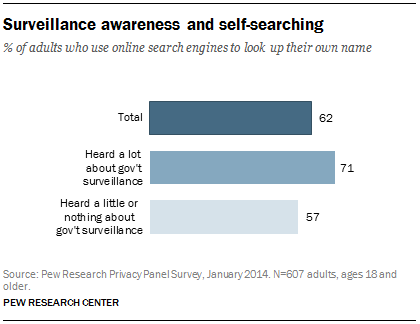 A majority of adults say that they keep track of their digital footprints, but those who have a high level of awareness about government surveillance are more likely to say they search for information about themselves online. Overall, six in ten (62%) of those who participated in our online panel have ever used a search engine to look up their own name or see what information about them is on the internet.11 Those who have heard a lot about government surveillance of communications are more likely to be self-searchers than those who have heard a little or nothing about it (71% vs 57%).12

Self-searching activity varies greatly across different groups, particularly by age, income, and household education. Adults under the age of 50 are far more likely to be “self-searchers” than those ages 50 and older, and adults with higher levels of household income and education stand out as especially likely to check up on their own digital footprints. 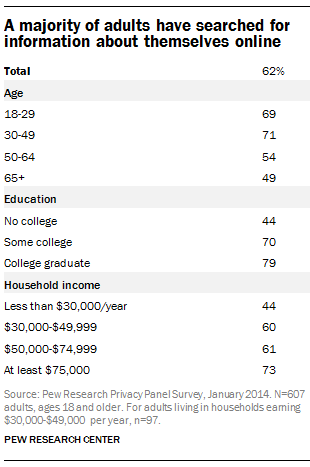 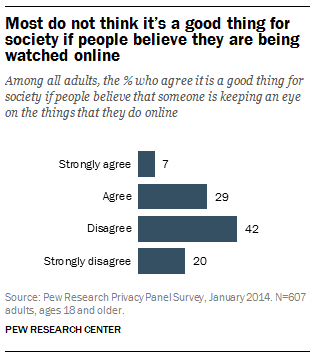 A majority of adults (62%) disagree with the statement “It is a good thing for society if people believe that someone is keeping an eye on the things that they do online,” including 20% who “strongly disagree.” Another 36% do agree that online surveillance is good for society, including the 7% who say they “strongly agree.”

Attitudes about online surveillance vary greatly among different groups, particularly by age and education. For instance, adults ages 50 and older are generally less likely than younger adults to see online surveillance as beneficial. Those with lower levels of education are also more likely to be in favor of online surveillance, with 45% of those who have not attended college agreeing overall—compared with 33% of those with some college experience and 26% of college graduates.

Overall, 40% “strongly agree” that American citizens should be concerned, while 39% “agree.” Men are more likely than women to “strongly agree” that the monitoring programs are cause for concern (46% vs. 35%). However, there are no significant variations by age, income or education levels.

Those who have heard “a lot” about government surveillance programs are considerably more likely to hold strong views; 53% “strongly agree” that citizens should be concerned, compared with 33% of those who have heard only a little or nothing about the programs.

Next: Public Confidence in the Security of Core Communications Channels is Low
← Prev Page
Page1Page2You are reading page3Page4Page5Page6Page7Page8Page9
Next Page →