This approach is a little new for us. Our previous reports have explored topics such as what people do at libraries and library websites or how Americans value individual library services based on traditional factors such as gender, race/ethnicity, age, and household income, but this typology moves beyond basic demographic descriptions. Instead, we used statistical analysis to cluster individuals into groups based on their usage of, views toward, and access to libraries, in order to discover larger insights about how libraries fit into American culture. The following table provides an overview of the typology groups. 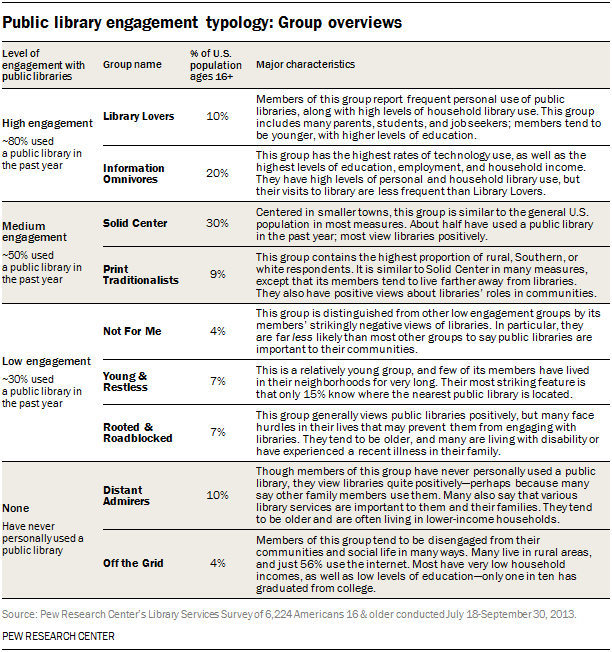 One thread running throughout the report is that people’s library habits do not exist in a vacuum. Americans’ connection—or lack of connection—with public libraries is part of their broader information and social landscape. Those who have extensive economic, social, technological, and cultural resources are also more likely to use and value libraries as part of those networks. Meanwhile, many of those who are less engaged with public libraries tend to have lower levels of technology use, fewer ties to their neighbors, lower feelings of personal efficacy, and less engagement with other cultural activities. These findings echo in several ways:

Life stage and special circumstances are linked to increased library use and higher engagement with information: Deeper connections with public libraries are often associated with key life moments such as having a child, seeking a job, being a student, and going through a situation in which research and data can help inform a decision. 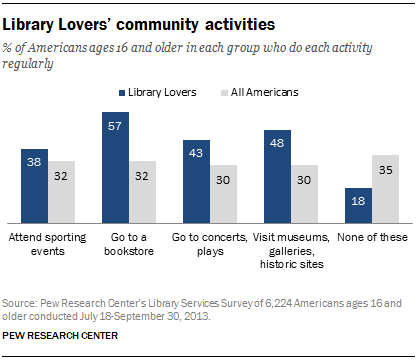 The most intense library users are also the most likely to be frequent bookstore visitors: “Library Lovers” represent the most highly engaged group in the typology. They are also big readers: Most of them read books daily, and they read an average of 27 books in the past year. And despite their higher levels of library use and the fact that most prefer to borrow books rather than purchasing them, 57% say they visit bookstores regularly (a higher proportion than any other group).