The Library User Survey obtained telephone interviews with a nationally representative sample of 6,224 people ages 16 and older living in the United States. Interviews were conducted via landline (nLL=3,122) and cell phone (nC=3,102, including 1,588 without a landline phone). The survey was conducted by Princeton Survey Research Associates International. The interviews were administered in English and Spanish by Princeton Data Source from July 18 to September 30, 20131. Statistical results are weighted to correct known demographic discrepancies. The margin of sampling error for results based on the complete set of weighted data is ±1.4 percentage points. Results based on the 5,320 internet users2 have a margin of sampling error of ±1.5 percentage points.

Numbers for the landline sample were drawn with probabilities in proportion to their share of listed telephone households from active blocks (area code + exchange + two-digit block number) that contained three or more residential directory listings. The cellular sample was not list-assisted, but was drawn through a systematic sampling from dedicated wireless 100-blocks and shared service 100-blocks with no directory-listed landline numbers.

For the cellular sample, interviews were conducted with the person who answered the phone. Interviewers verified that the person was age 16 or older and in a safe place before administering the survey. Cellular respondents were offered a post-paid cash reimbursement for their participation.

The first stage of weighting corrected for different probabilities of selection associated with the number of adults in each household and each respondent’s telephone usage patterns.3 This weighting also adjusts for the overlapping landline and cell sample frames and the relative sizes of each frame and each sample. 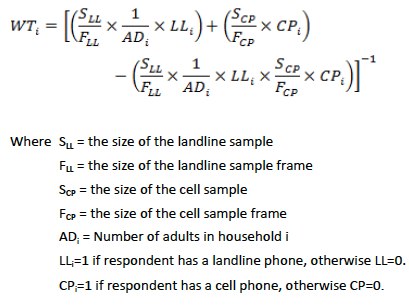 The basic weighting parameters came from the US Census Bureau’s 2011 American Community Survey data.4 The population density parameter was derived from Census 2010 data. The telephone usage parameter came from an analysis of the July-December 2012 National Health Interview Survey.5 6 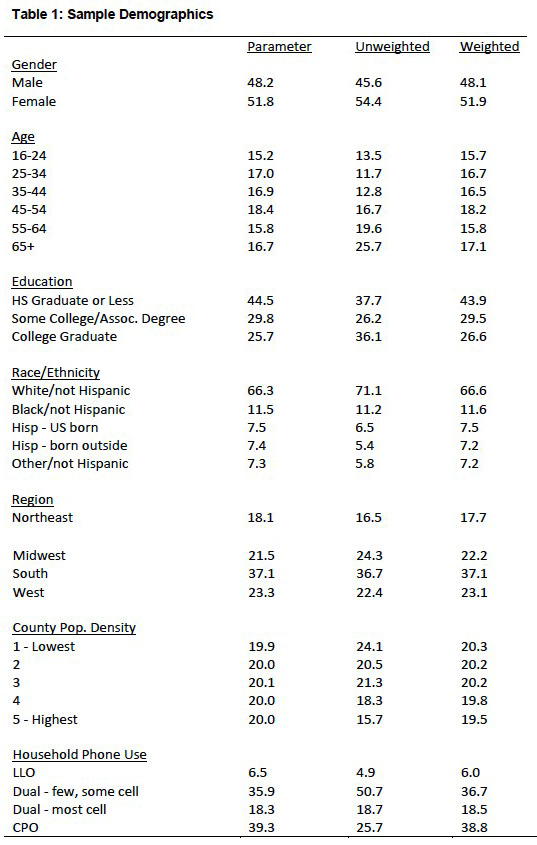 Post-data collection statistical adjustments require analysis procedures that reflect departures from simple random sampling. PSRAI calculates the effects of these design features so that an appropriate adjustment can be incorporated into tests of statistical significance when using these data. The so-called “design effect” or deff represents the loss in statistical efficiency that results from unequal weights. The total sample design effect for this survey is 1.25.

The survey’s margin of error is the largest 95% confidence interval for any estimated proportion based on the total sample— the one around 50%. For example, the margin of error for the entire sample is ±1.4 percentage points. This means that in 95 out every 100 samples drawn using the same methodology, estimated proportions based on the entire sample will be no more than 1.4 percentage points away from their true values in the population. It is important to remember that sampling fluctuations are only one possible source of error in a survey estimate. Other sources, such as respondent selection bias, questionnaire wording and reporting inaccuracy, may contribute additional error of greater or lesser magnitude.

Table 2 reports the disposition of all sampled telephone numbers ever dialed from the original telephone number samples. The response rate estimates the fraction of all eligible respondents in the sample that were ultimately interviewed. At PSRAI it is calculated by taking the product of three component rates:7 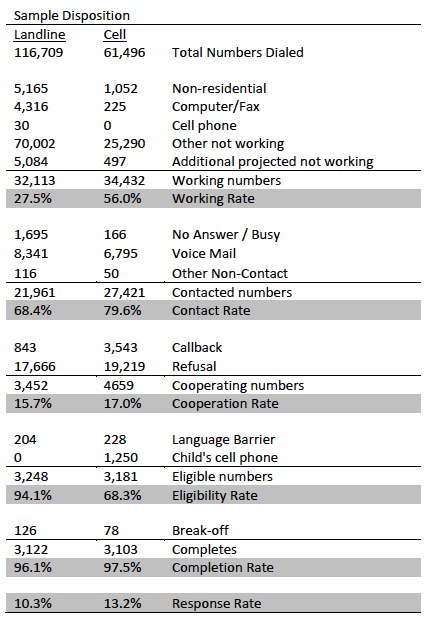