Younger adults (those ages 18-29), the college-educated, the more affluent, and urban and suburban-dwellers are especially likely to use their phones in a variety of ways.  The following tables highlight the demographic composition of those who perform certain activities on their cell phones.

Texting continues to be one of the most prevalent cell phone activities of all time.  Fully 81% of cell owners text.  It is especially popular among younger adults, the college-educated, and those living in higher-income households. 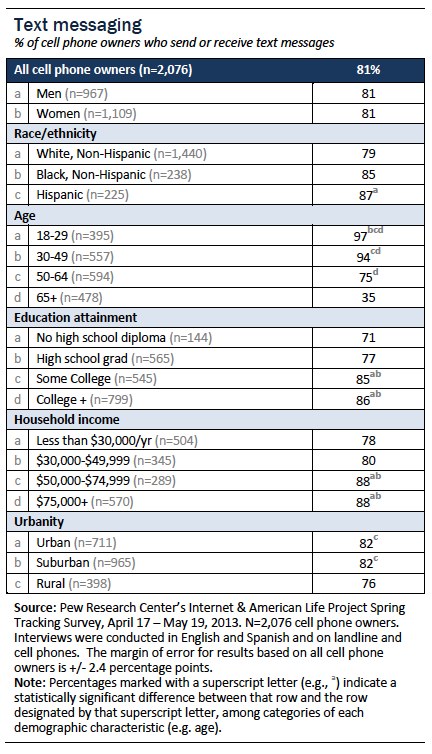 Six-in-ten cell owners access the internet on their phones.  African-Americans and Hispanics are more likely to do so than whites.  Younger adults, those with at least some college education, and those with an annual household income of over $75,000 a year are particularly likely to access the internet via cell phone.  Those who live in rural areas are less likely than urban or suburbanites to have mobile internet access.

Among those who use the internet or email on their phones, more than a third (34%) say that they mostly access the internet from their phone.1 African-Americans, Hispanics, young adults, those with lower levels of education, and those living in lower-income households are especially likely to say their cell phone is their primary point of internet access. 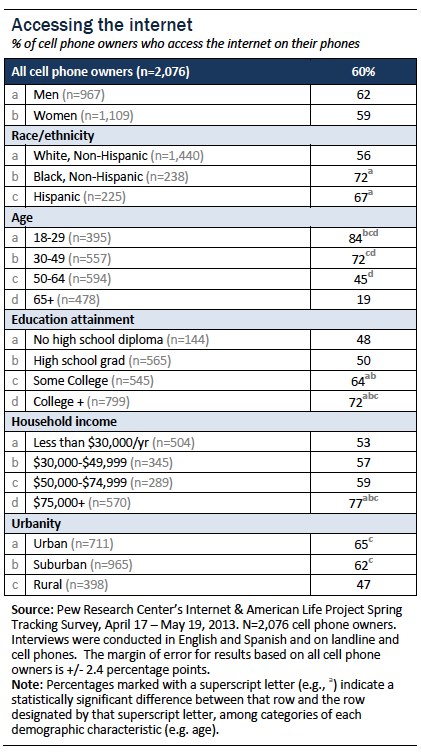 Half of cell owners send or receive email from their phone.  The activity is most popular among younger adults, the well-educated, those in higher income brackets, and urban and suburban-dwellers. 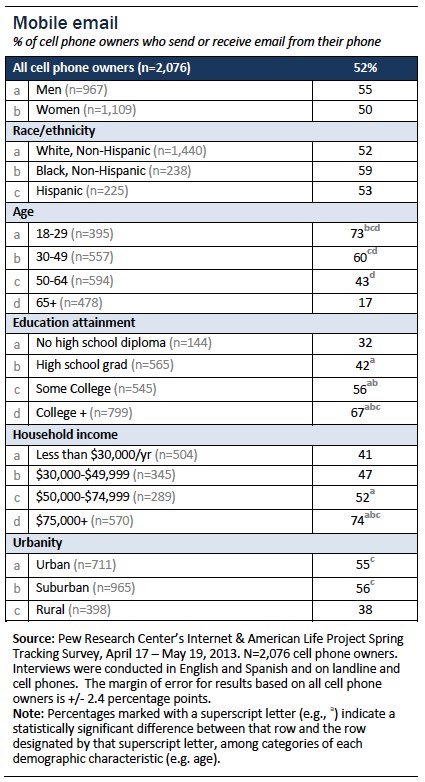 Half of cell owners download apps to their phone.  Adults ages 18-29, the well-educated, those with higher incomes, and those living in urban and suburban areas are particularly likely to download apps. 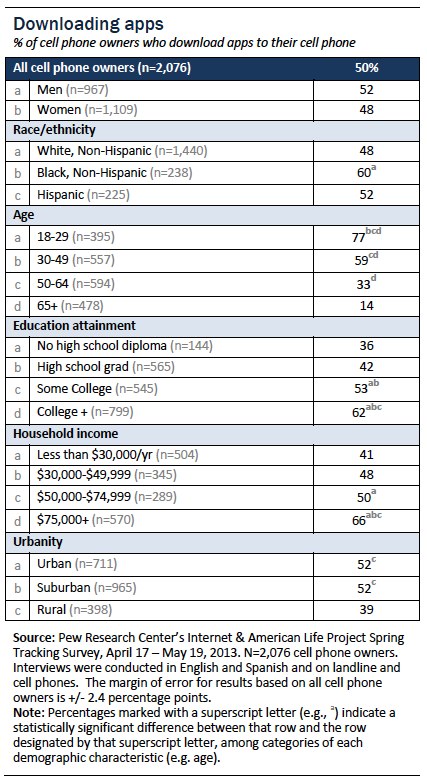 Directions, recommendations, and other location-related services

Half (49%) of cell owners have used their phones to look up directions, recommendations, and other information related to their location.  Young adults (ages 18-29), those who are well-educated, higher income, and urban and suburban residents are most likely to do so. 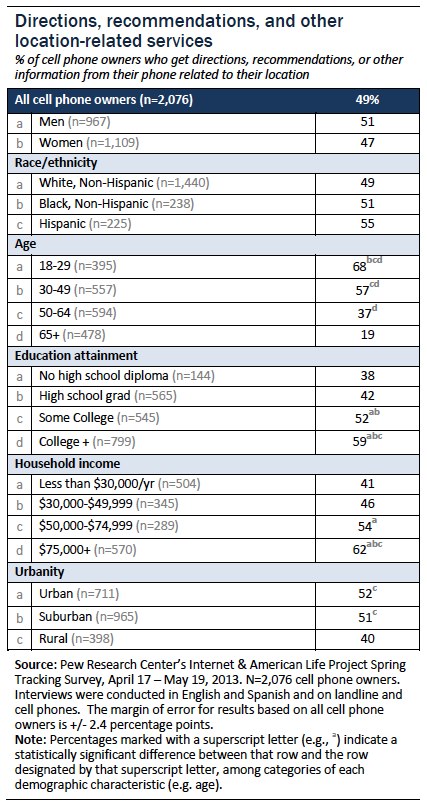 About half of cell owners (48%) listen to music on their phones.  This is the first time we have asked this question, so there are no trend data to report. Men, younger adults, those living in households with an annual income over $75,000, and urban and suburban residents are particularly likely to do so.  African-Americans and Hispanics are more likely than whites to listen to music on their phones. 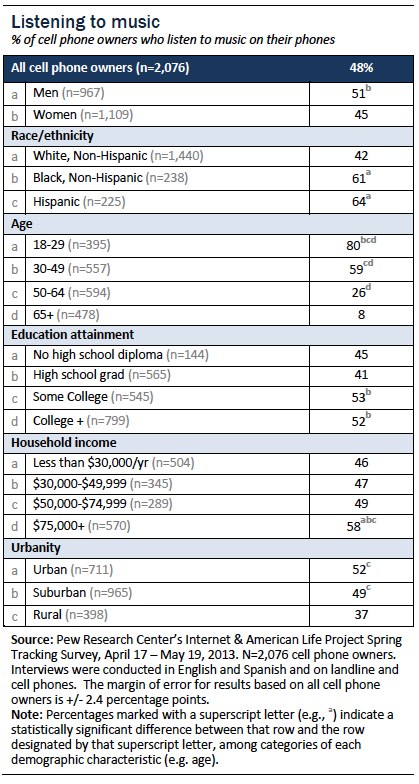 Two-in-ten cell owners video chat from their phones.  Men, younger adults, the well-educated, and urbanites are especially likely to do so.  Hispanics are more likely than both African-Americans and whites to make video calls. 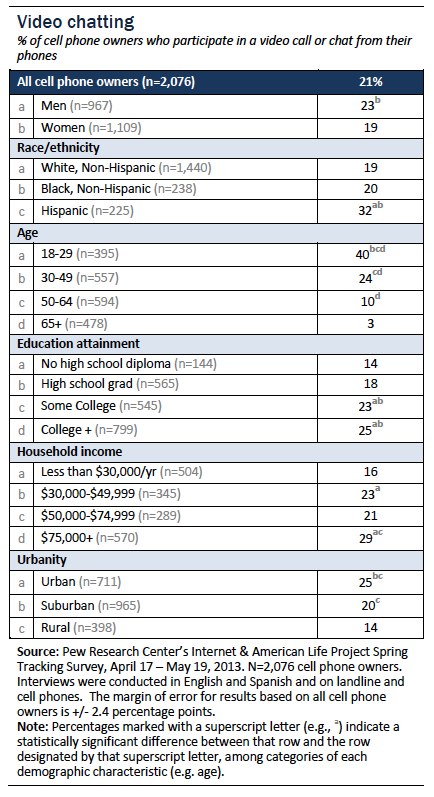 Just 8% of cell owners “check in” using services like FourSquare or share their location from their phone.2 This represents a significant drop from the 11% of cell owners who did so in February 2012, the last time we asked.  Younger adults are more likely to share their location and Hispanics are more likely than both African-Americans and whites to do so. 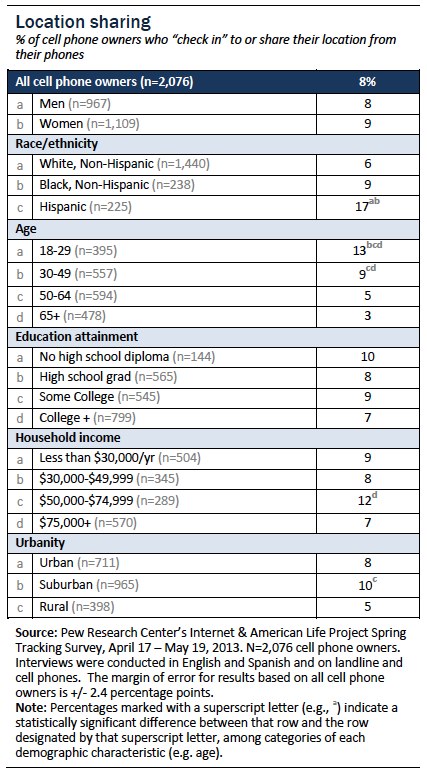