As social networking sites have become more common, users now engage in a range of activities around political or social issues within these online spaces — from encouraging their friends to vote or suggesting political content to others, to joining issue-oriented groups or following the posts of politicians or other public figures. In our 2012 survey we asked about eight different politically oriented behaviors that users might take part in on social networking sites, and some 66% of SNS users said that they had done at least one of them in the past year. We refer to this group as “political social networking site users,” and they comprise 39% of the total U.S. adult population. 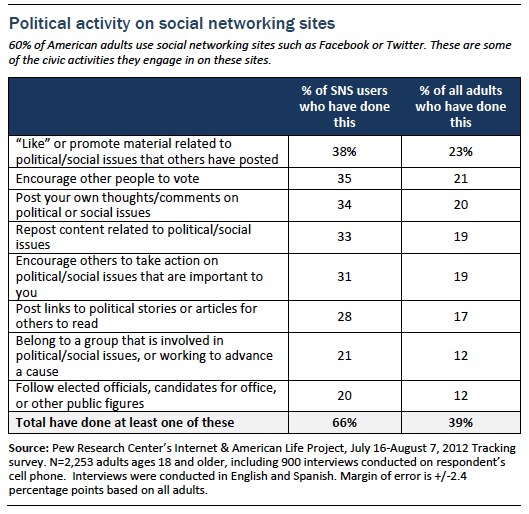 Because social networking sites were a modest component of our 2008 study, we do not have trend data available for all of these activities over the full four-year period. However, we did ask similar questions about a subset of these behaviors that illustrate the growing importance of social networking sites as a place for activism and discussion about social or political activities:

Among Americans who use social networking sites, political activity on online social networks is common across a wide range of subgroups. Indeed, a majority of social networking site users in every demographic group — including seniors, those who have not attended college, or those with low household incomes — use these sites to engage in political activities or discussions. However, these behaviors are especially prevalent among the youngest users and those who have attended college. 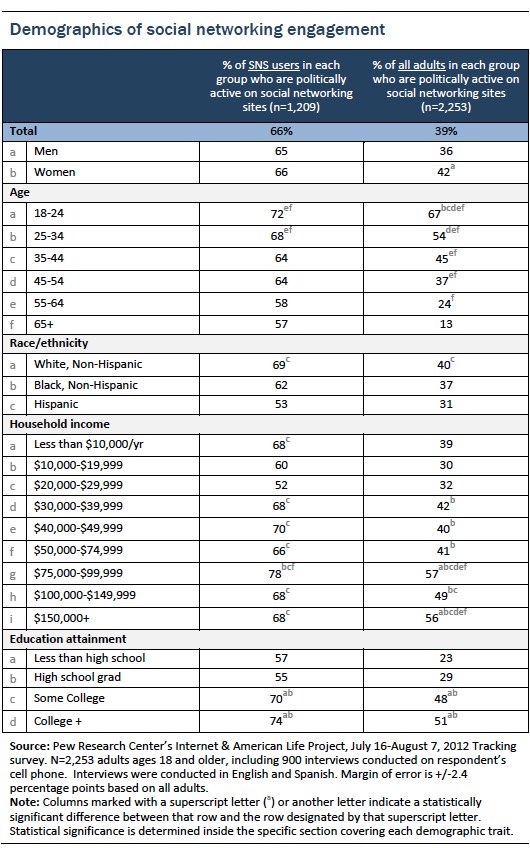 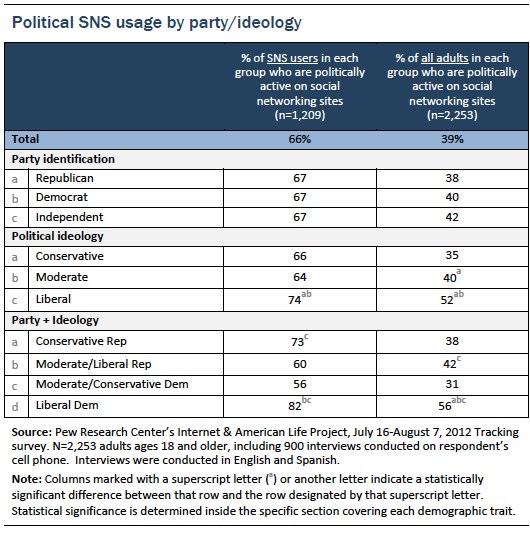 Discussions of political or social issues on social networking sites can spur users to get more involved or learn more about those issues. These actions can be encouraged by discussions among friends, as well as from posts made by organizations or public figures.

Some 43% of social networking site users say they have decided to learn more about a political or social issue because of something they read about on a social networking site. This group is evenly split between those who were first introduced to the particular issue by people they know personally, and those who were first introduced to the issue by someone outside their immediate friend circle:

The remaining social networking site users (representing 56% of the total) say they have never decided to learn more about an issue based on things they read on these sites.

A smaller but still notable number of social networking site users — 18% — say that in the last year they decided to take action involving a political or social issue because of something they read on those sites. This group was also evenly divided between actions taken at the behest of personal friends and actions taken at the urging of organizations or public figures:

The remaining social networking site users (representing 82% of the total) say they have never decided to take action on a political or social issue because of something they read on these sites.

Demographically, age and educational attainment are the primary dividing lines when it comes to learning more about political or social issues based on social network chatter. Just under half of social network users ages 18-49 say they have decided to learn more about an issue due to information they encountered on a social networking site, compared with around one in three users ages 50 and older. Similarly, some 52% of college graduates who use social networking sites have done this, significantly higher than the 38% of high school graduates and 41% of those with some college experience (but not a degree) who have done so.

Similarly, when it comes to taking action on a political or social issue, those with higher levels of education (college graduates and those with some college experience) again stand out from the less well-educated. However, social network users of all ages are equally likely to say they have taken action because of things they have read or heard on these sites. 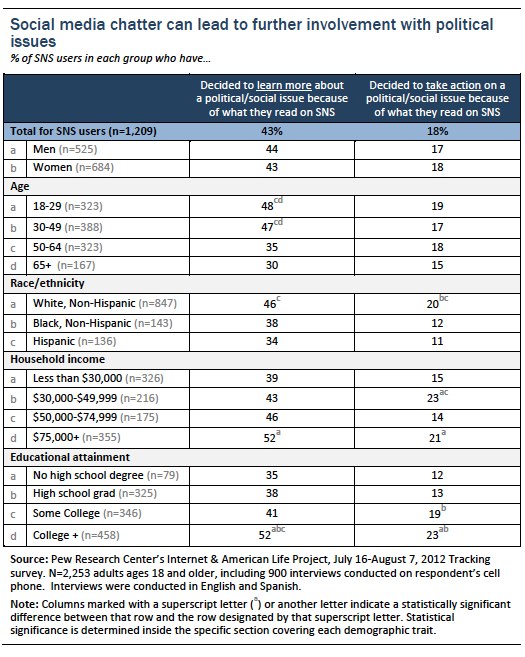 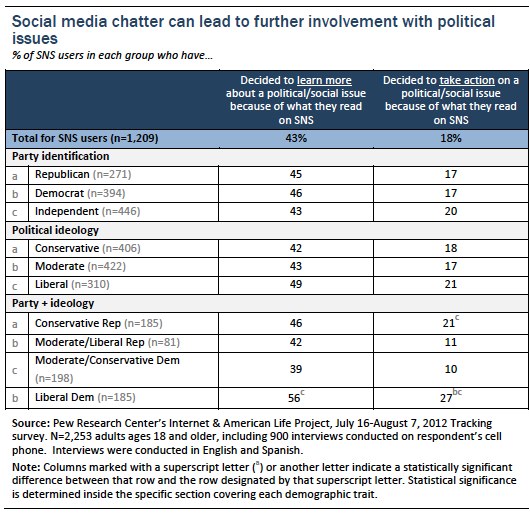 Politically active social network users are frequently — but not universally — engaged with other aspects of civic life.

Political social networking site users (that is, the 39% of Americans who have recently done one of the eight general SNS-and-politics-related activities we asked about in this study) are also likely to be engaged in other forms of political and civic activity that occur somewhere other than social networking sites:

In discussing these differences, it is important to note that we cannot say for certain that this greater involvement in civic actions and behaviors is directly caused by people’s experiences or interactions on social networking sites. Indeed, the causal mechanism may in fact work in the opposite direction, such that people who are already active or engaged in political/social causes make use of social networking sites as another outlet for their existing interests. 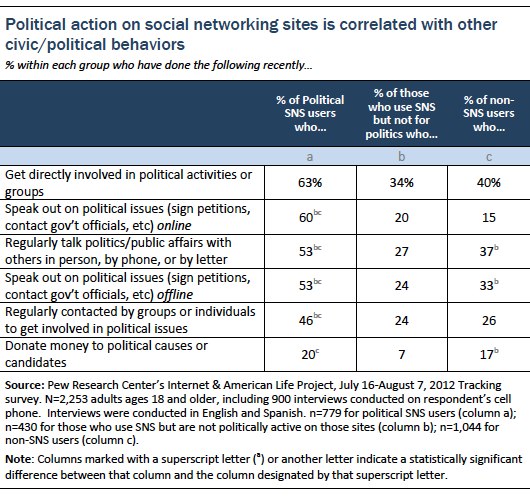 Those whose political activity occurs only in the context of social networking sites look very different from other political SNS users.

As noted above, 83% of “political social networking site users” take part in actions related to political or social issues in other venues (either online or offline). Of course, this means that 17% of these political SNS users (representing 8% of the total population) do not engage in any of the other behaviors we asked about and take part in political actions only within the context of social networking sites. In the final section of this chapter, we examine the unique characteristics of this particular group.

Compared to those who extend their political involvement into realms other than social networking sites, these “SNS-only” users differ in a number of important ways. Demographically, they are significantly younger and have lower levels of income and educational attainment than those who take part in political actions on social networking sites as well as other venues. They are also significantly less likely to talk about political issues in other online spaces, and to receive political communications from other people or organizations (although both groups are equally likely to talk about politics with others in offline spaces). 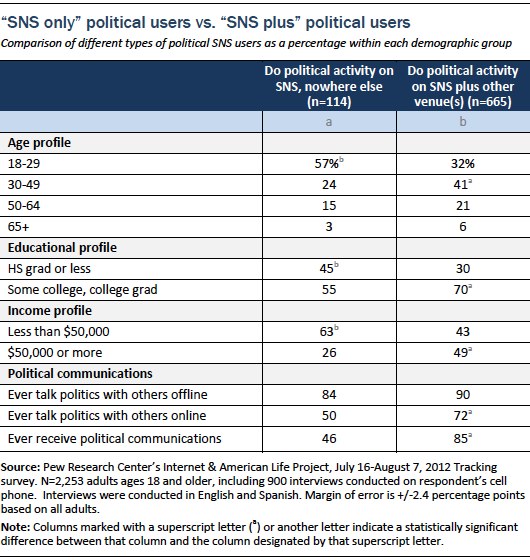 In terms of their political beliefs and partisan leanings, “SNS-only” political users are a bit of a mixed bag. They are similar to political SNS users who branch out into other forms of political behavior in terms of their ideological leanings; and while they are a bit less likely to describe themselves as Republican, they are also more likely to say that they do not identify strongly with any party in particular (some 22% of these “SNS-only” users do not lean towards either party, compared with 12% of the “SNS-plus” group). Interestingly, they are more likely than their “SNS-plus” counterparts (by a 16%-5% margin) to strongly agree with the statement that “most elected officials care about what people like me think.” But overall, there are no clear partisan or attitudinal trends within this group.

Next: Part 3: Do online channels bring new voices or attitudes into the political debate?
← Prev Page
Page1Page2You are reading page3Page4Page5
Next Page →