Most parents of teenagers are concerned about what their teenage children do online and how their behavior could be monitored by others. Some parents are taking steps to observe, discuss, and check up on their children’s digital footprints. A new survey of 802 parents and their teens shows that: 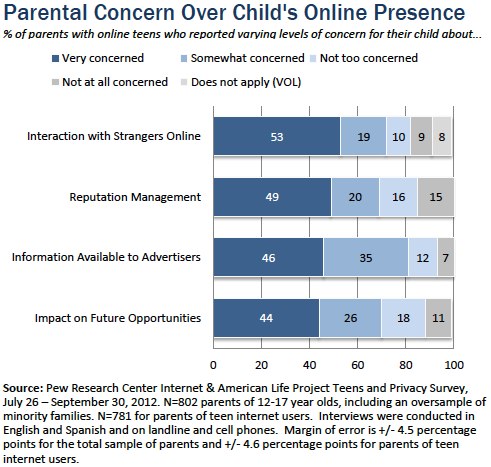 Some of these expressions of concern are particularly acute for the parents of younger teens:

A notable number of parents, especially parents of younger teens, are taking steps to act on these concerns:

In addition to such direct interventions, some parents are monitoring their children on family computers and in online searches: 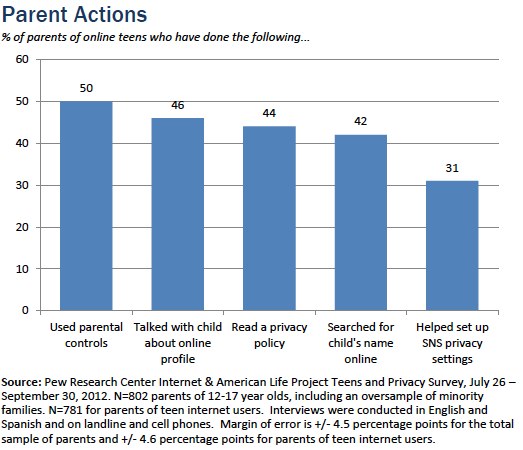 The survey also finds that a growing number of parents are becoming social media users themselves:

While parents may forge connections with their teens on social media in order to passively observe them, many are also actively engaging with their children and making their presence known. Half (50%) of parents who use social media (and who also have teens who use the sites) say they have commented or responded directly to something that was posted to their child’s profile or account. Mothers and fathers of children of all ages and across all demographic groups are equally as likely to engage with their child’s profile in this way.

These findings are based on a nationally representative phone survey of 802 parents and their 802 teens ages 12-17. It was conducted between July 26 and September 30, 2012. Interviews were conducted in English and Spanish and on landline and cell phones. The margin of error for the full sample is ± 4.5 percentage points. In collaboration with the Berkman Center for Internet & Society at Harvard, this report also includes quotes gathered through a series of exploratory in-person focus group interviews about privacy and digital media, with a focus on social networking sites (in particular Facebook), conducted by the Berkman Center’s Youth and Media Project between May and December 2011. The team conducted 16 focus group interviews with roughly 120 students.