Mobile technology has accelerated the pace at which people access, acquire and generate data. Users’ cell phones are now rich repositories of memories and content that chronicle their lives. A staggering archive of personally identifiable information exists about cell users —a reality that is both the consequence of and driving force of the networked age. As nearly one-fifth of cell owners (17%) use their cell phone for most of their online browsing, privacy and data management on mobile devices is increasingly emerging as a contested arena for policymakers, industry leaders and the public.1

The debate’s focus often centers upon the app market. Consumers are amassing apps on their cell phones in record numbers. At the same time, some app developers are quietly amassing sensitive and personal data from their users.2

Regulatory efforts have attempted to preserve user privacy in the app marketplace. Earlier this year, a Federal Trade Commission report spotlighted a lack of transparency within app privacy policies, citing that the majority of mobile programs directed toward children lacked thorough explanations of data collection procedures.3 Responding to pressure from California’s Attorney General, the largest app distributors — Apple, Google, Microsoft, Amazon, Hewlett-Packard and Research In Motion — consented in the first quarter of 2012 to provide better articulation of app privacy policies.4 And in February 2012, the White House released its “Privacy Bill of Rights,” a document that outlined best practices for generalized data management —suggestions relevant to the mobile realm.5

This report represents the Pew Internet & American Life Project’s first effort to see how cell phone users manage their personal mobile information. Our questions explored some steps they take to control who has access to that information (be that other individuals or third parties such as app makers), their efforts to protect their personal data and information from loss, as well as their experiences with cell phones that are lost or otherwise compromised by third parties.

Many cell phone users take steps to manage, control, or protect the personal data on their mobile devices. In a new study by the Pew Internet Project of how cell phone users manage their mobile data, we asked about five specific behaviors in which cell phone owners might engage. Two of these activities were asked of the 43% of cell owners who download cell phone applications. Among this group, representing 38% of the adult population, we found that:

Taken together, 57% of all app users have either uninstalled an app over concerns about having to share their personal information, or declined to install an app in the first place for similar reasons.

Outside of some modest demographic differences, app users of all stripes are equally engaged in these aspects of personal information management. Owners of both Android and iPhone devices are also equally likely to delete (or avoid entirely) cell phone apps due to concerns over their personal information.

In addition to these measures of app-specific behaviors, we also asked about three general activities related to personal data management on cell phones. These questions were asked of the 88% of the adult population that owns a cell phone of any kind. Among this group, we found that:

Nearly one third of cell owners have experienced a lost or stolen phone, and 12% have had another person access the contents of their phone in a way that made them feel their privacy was invaded

Even as cell owners take steps to maintain control over their personal data in the context of mobile phones, the physical devices themselves can occasionally fall into the wrong hands. Some 31% of cell owners have lost their cell phone or had it stolen, while 12% of cell owners say that another person has accessed their phone’s contents in a way that made them feel that their privacy had been invaded. Despite the fact that backing up one’s phone is typically conducted as a safeguard in the event that the phone is lost or stolen, cell owners who have actually experienced a lost or stolen phone are no more likely than average to back up the contents of their phone.

The youngest cell phone users (those ages 18-24) are especially likely to find themselves in each of these situations. Some 45% of cell owners in this age group say that their phone has been lost or stolen, and 24% say that someone else has accessed their phone in a way that compromised their privacy.

Yet despite these steps, smartphone owners are also twice as likely as other cell owners to have experienced someone accessing their phone in a way that made them feel like their privacy had been invaded. Owners of smartphones and more basic phones are equally likely to say their phone has been lost or stolen. 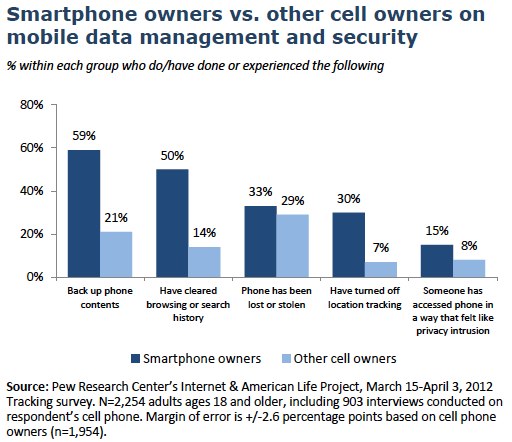 The results reported here come from a nationwide survey of 2,254 adults (age 18 and older) between March 15-April 3, 2012, including interviews on landline and cell phones and conducted in English and Spanish. The overall sample has a margin of error of plus or minus 2.4 percentage points. Some 1,954 cell users were interviewed in this sample and many of the results published here involve that subset of users. The margin of error for data involving cell users is plus or minus 2.6 percentage points.