Apps and privacy: More than half of app users have uninstalled or decided to not install an app due to concerns about their personal information

In this survey, we found that 88% of American adults use cell phones. Some 43% of these cell owners now download apps to their phones, which is a notable increase from the 31% of cell owners who said they downloaded apps in 2011. As mobile applications grow in popularity, a substantial share of consumers is taking into consideration the way apps deal with users’ personal information:

Taken together, 57% of all app users have either uninstalled an app over concerns about having to share their personal information, or declined to install an app in the first place for similar reasons.

Interestingly, there are relatively few differences—demographic or otherwise—between app users when it comes to avoiding or uninstalling apps due to concerns about data collection or sharing. Certainly, some groups are more likely than others to use apps in the first place (these differences are illustrated in the table below), but significant differences among those who actually use apps are largely confined to the following:

Outside of these rather modest differences, the story of cell owners’ concerns about apps and their personal information is one of consistency across groups. Younger cell owners are much more likely than their elders to use apps—yet app users of all ages are equally likely to remove (or to avoid downloading) an app based on privacy concerns. 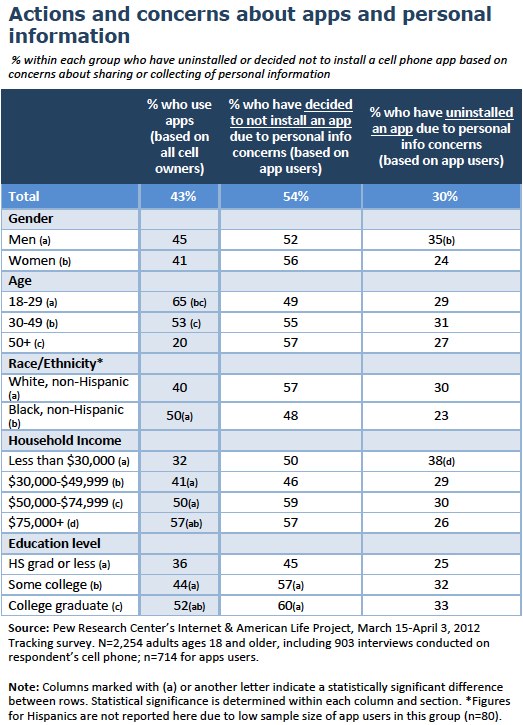 One in five cell owners have turned off the location tracking feature on their phone, and one in three have cleared their cell phone browsing or search history

Although they pose unique challenges to consumers from the standpoint of protecting one’s personal information, apps represent just one component of the mobile privacy environment. Mobile devices store a wide array of personal (and potentially sensitive) data, from detailed search and browsing histories to up-to-the-minute information about one’s location or movements.

In an effort to measure consumers’ responses to these broader privacy concerns, we asked cell owners about their experiences with two specific behaviors—clearing one’s search or browsing history, and disabling the general location tracking feature on one’s phone. We found that:

Smartphone owners are especially active when it comes to these behaviors. Some 50% of smartphone owners have cleared their phone’s browsing or search history, while 30% have turned off the location tracking feature on their phone due to concerns over who might access that information. 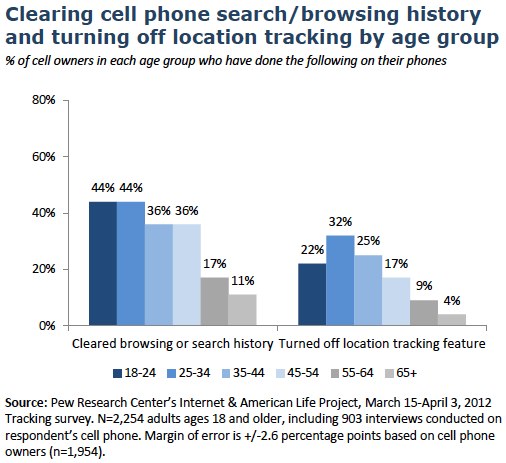 In addition to age and smartphone ownership, cell phone privacy behaviors vary by gender and parental status. Specifically, male cell owners are more likely than women to clear the search and browsing history on their phones (37% of men do this, compared with 28% of women), and parents are more likely than non-parents to clear their search or browsing history (39% vs. 29%) as well as to turn off the location tracking feature on their phones (25% vs. 16%).

Nearly one third of cell owners have experienced a lost or stolen phone, while one in ten have had someone access their phone in a way that they felt invaded their privacy

Even as cell owners take steps to limit the mobile data that can be accessed by apps makers, advertisers, and mobile operators, cell phones can still physically fall into the wrong hands. Indeed, some 31% of cell owners have had their cell phone lost or stolen, and 12% have experienced a situation in which another person has accessed the contents of their phone in a way that made them feel that their privacy had been invaded.

Interestingly, smartphones are no more likely to be lost or stolen than more basic devices (some 33% of smartphone owners have experienced this, compared with 29% of other cell owners) although these advanced mobile devices do have the potential to offer a more target-rich environment for privacy invasion. Some 15% of smartphone owners say that someone has accessed their phone in a way that made them feel their privacy was invaded, nearly double the 8% of basic phone owners who say this has ever happened to them.

Both of these aspects of mobile privacy also exhibit significant variation based on age. The youngest cell owners (those ages 18-24) are especially likely to have experienced a lost or stolen phone—nearly half (45%) have had this happen to them at some point—although this behavior is relatively common across a range of age cohorts, as one in five cell owners age 65 and up (20%) have experienced the loss or theft of a mobile device. On the other hand, younger users are much more likely to say that personal data on their phone has been accessed by another person in an inappropriate way. Fully one-quarter of cell owners ages 18-24, and 18% of those ages 25-34, say that someone has accessed their phone in a way that made them feel that their privacy had been invaded. By contrast, just 2% of cell owners ages 65 and older have encountered this situation. 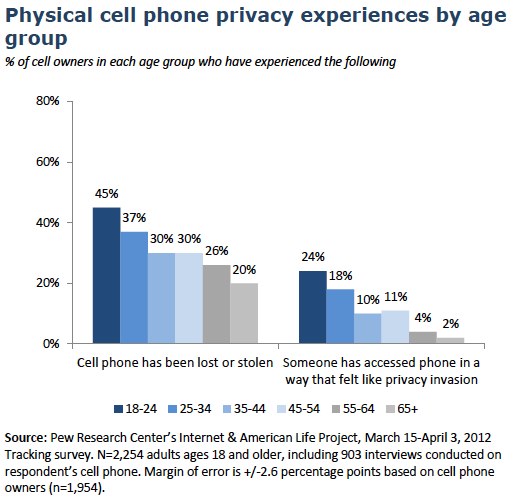 Outside of age, most cell owners are equally likely to experience a lost or stolen phone—although there are some differences around race/ethnicity and community type. Some 44% of African American cell owners say that their phone has been lost or stolen (compared with 28% of whites), while 36% of urban-dwelling cell owners have experienced this (compared with 29% of suburban and 26% of rural residents). When it comes to whether someone has had their phone accessed in a way that made them feel their privacy was violated, age and smartphone ownership are the primary sources of variation: other demographic differences on this issue are relatively modest.

In terms of phone type, Blackberry owners are more likely than other smartphone owners to say that their phone has been lost or stolen—some 45% of Blackberry users say this has happened to them, compared with 30% of iPhone owners and 36% of Android owners. But just 4% of Blackberry users say that someone else has accessed their phone in a way that invaded their privacy, a figure that is substantially lower than the 16% of iPhone owners and 17% of Android owners who have experienced this. 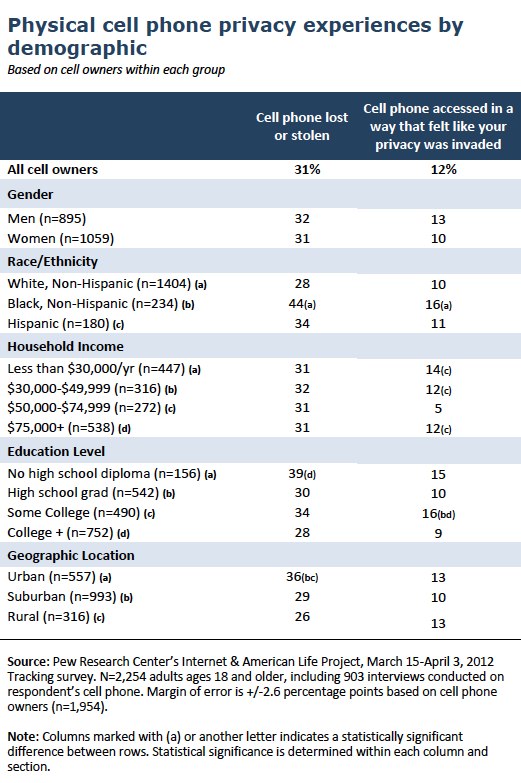 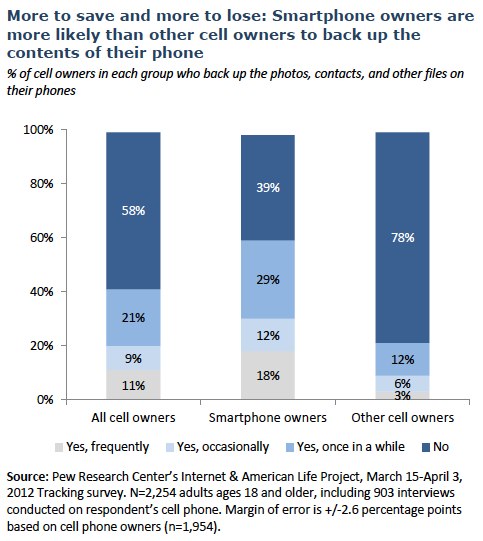 By contrast, individuals who say that another person has accessed the contents of their phone without their permission are much more likely than average to conduct regular backups. Some 57% of cell owners whose mobile data has been compromised in this way say that they back up the contents of their phone, compared with 39% of those who have not experienced a similar situation.

In terms of demographic differences, backing up one’s phone’s data goes hand-in-hand with smartphone ownership. Groups with relatively high levels of smartphone ownership (those under 50, the college-educated, those with a household income of $50,000 or more per year) are also the ones that are most likely to say that they back up the contents of their phone. 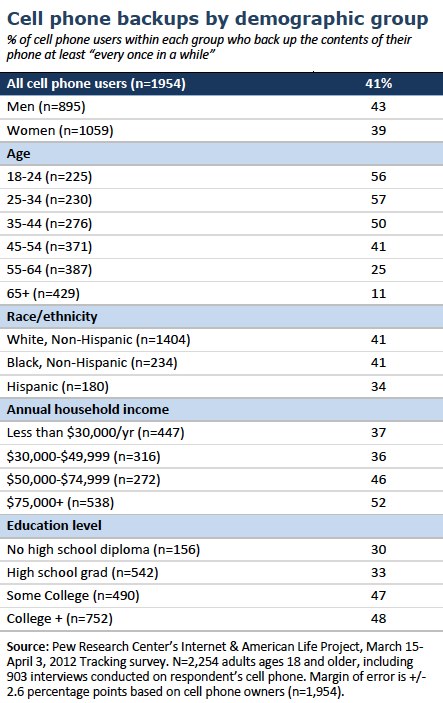 Privacy and Data Management on Mobile Devices
Main Findings
Apps and privacy: More than half of app users have uninstalled or decided to not install an app due to concerns about their personal informationOne in five cell owners have turned off the location tracking feature on their phone, and one in three have cleared their cell phone browsing or search historyNearly one third of cell owners have experienced a lost or stolen phone, while one in ten have had someone access their phone in a way that they felt invaded their privacyFewer than half of all cell owners—but a majority of smartphone users—back up the contents of their phone
Methodology