After getting the basics about those who are active in religious organizations, we examined their broad patterns of involvement in groups by looking at the number of groups that a person was active in and the number hours devoted to these groups.

The average American adult is active in 3.51 groups of the various types queried in the survey, and the average person spends 6.54 hours per week in group activities.6

By comparison, the average number of groups that members of religious or spiritual organizations are active in is 5.61, and those who are not involved with religious groups participate in 2.11 groups.

Exploring this involvement more, we classified people into four categories, depending on how many groups they were involved with (remember, the survey covered 28 different kinds of groups): 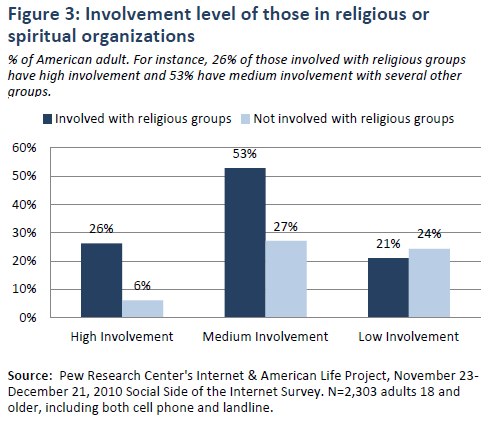 To examine this aspect, we classified people into four categories: 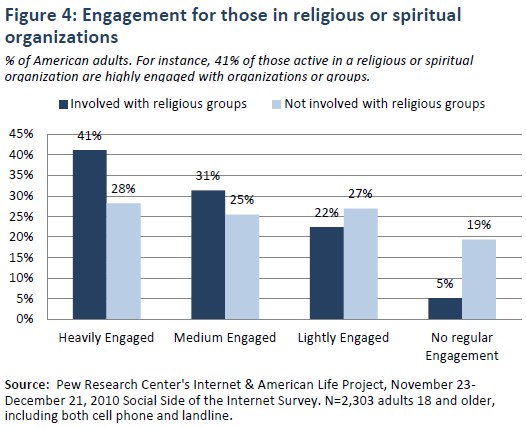 Other organizations to which religiously active Americans belong

Of the 28 groups that we surveyed, religiously active Americans are involved in greater percentages in every type of group save one (gaming groups) than their non-religious peers.

The only group for which the religiously active do not participate in greater percentages is gaming communities, where 5% of the religious are active versus 6% for the non-religious.

What motivates group membership by those in religious organizations

With this background on involvement and engagement, we were interested in what motivated these people to become active in their groups and organizations. We asked a series of questions about possible motives that might drive people to participate in organizations. The results are reported in Figure 5. It is important to note that respondents’ answers reflected their views about membership in all the groups they participate in, not just the religious groups.

The pattern is clear: Those who are religiously active are more likely than others to see that the organizations of which they are members are more personally rewarding and have greater impact, especially off-line. 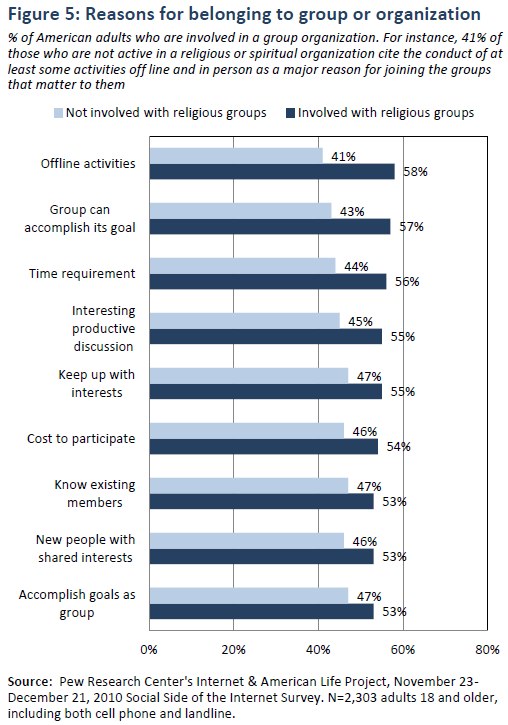 Some 58% of those who are active in a religious or spiritual organization cite the conduct of at least some activities off line and in person as a major reason for joining the groups that matter to them. This was closely followed by a belief that the group can accomplish its goal (57%) and the time required for participation (56%).

In contrast, those who were not members of religious or spiritual organizations said these reasons were the most important for joining their groups: knowing existing members, keeping up with interests, and accomplishing something as part of a group that one can’t accomplish individually (all at approximately 47%).

We wanted to gauge the political affiliations of those active in religious or spiritual organizations. Since such political positions can sometimes be nuanced, we explored this matter in three different ways:

Results are shown in Figure 6. 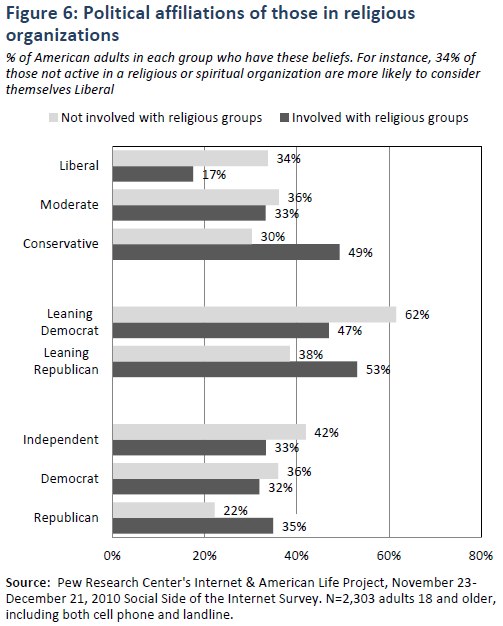 From Figure 6, we can see that 35% of those active in a religious or spiritual organization are more likely to consider themselves Republican, with slightly less percentages for both Democrat (32%) and Independent (33%). It is interesting to note the political alignment of those not active in religious or spiritual organizations, with 22% considering themselves Republican, 36% Democrat, and 42% Independent.

As for where they placed themselves on the political spectrum, 49% of those in a religious or spiritual organization considered themselves Conservative, with 33% being Moderate and 17% being Liberal.

The trust, efficacy, and community view of the religiously active

We wanted to measure how those active in religious groups view others, themselves, and their communities.

For insight into people’s sense of trust, we asked, “Generally speaking, would you say that most people can be trusted or that you can’t be too careful in dealing with people?” The results are shown in Figure 7. 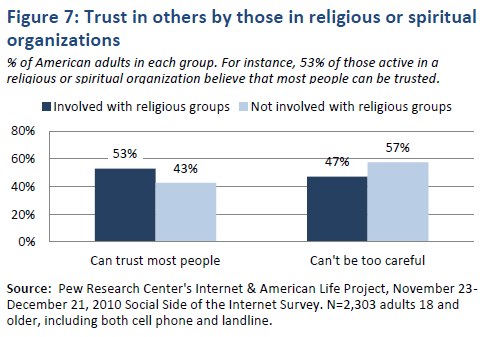 From Figure 7, 53% of those active in a religious or spiritual organization believe that most people can be trusted, significantly higher than those not active in such organizations (43%).

On the issue of personal efficacy, we asked respondents, “Overall, how much impact do you think people like you can have in making your community a better place to live — a big impact, a moderate impact, a small impact, or no impact at all?” Results are shown in Figure 8. 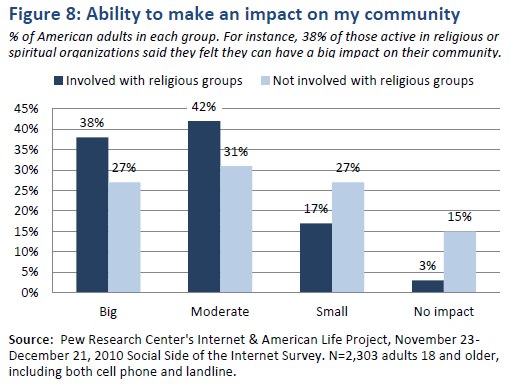 We were also interested in how people view the communities in which they live (Figure 9). 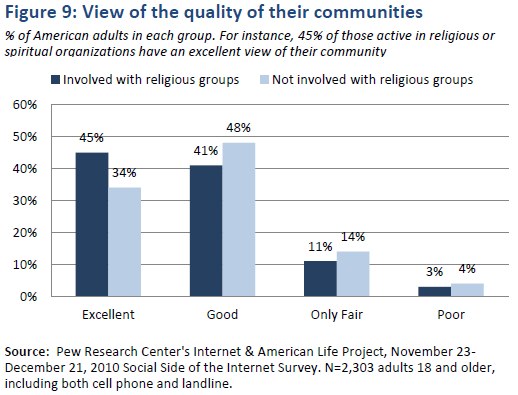 As one can see from Figure 9, 45% of those active in religious or spiritual organizations have an excellent view of their community compared with 34% of those not active in these organizations, again substantially higher.