Although smartphone ownership varies significantly based on demographic factors, within the smartphone owner population there is relatively little variation when it comes to using one’s phone to go online. Age is the primary differentiator—fully 94% of smartphone owners ages 18-29 use their phones to go online, with eight in ten (81%) doing so on a typical day. 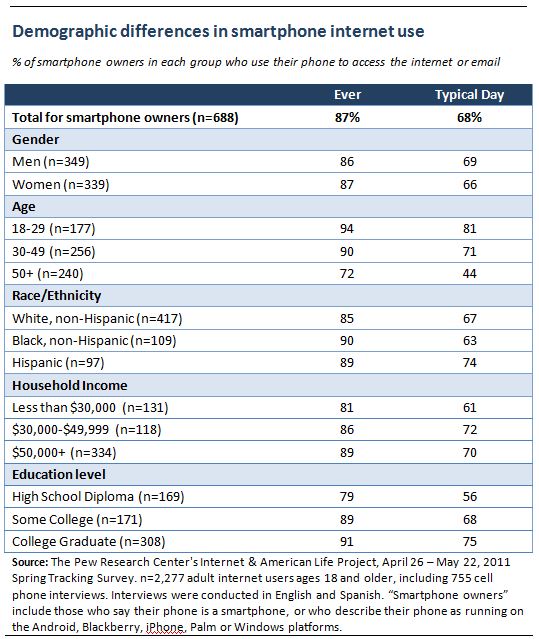 One-quarter of smartphone owners mostly go online using their cell phone, even though many have other access options available to them

When asked what device they typically use to access the internet, 28% of smartphone internet users (the 87% of smartphone owners who go online using their phone) say that they use their mobile phone for most of their online activity:

Put another way, this means that 25% of all smartphone owners (regardless of whether or not they use the internet on their device) do most of their online browsing on their mobile phone.

In looking at this 25% of smartphone owners who do most of their online activities on their phone, the question naturally arises as to what extent this is based on necessity (i.e. a lack of other internet access options) versus convenience or other factors. Although we did not address this question directly in our survey, our data does offer some insights into this particular group.

Even among smartphone owners who use their phone as their main source of internet access, computer (i.e. laptop or desktop) ownership is quite prevalent. Indeed, fully 84% of these individuals also have a desktop or laptop computer at home. At the same time, a notably smaller number have access to high-speed internet service, as just over two-thirds of these users (68%) have broadband at home. This is slightly above the national broadband average (61% of all adults are broadband adopters), but still means that 32% of these “cell mostly” internet users lack traditional high-speed home access—even though they may go online from other locations outside of the home.

This is a marked contrast from smartphone users who go online mostly using a device other than their phone, who are much more likely to have an internet-connected computer at home. Within this group, both computer ownership (99%) and broadband adoption (94%) are near-ubiquitous. 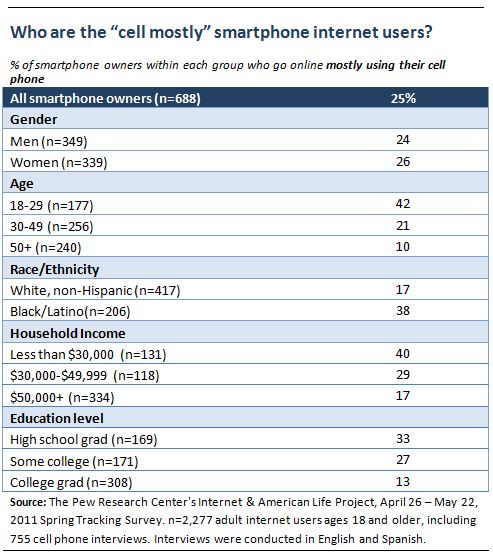