Those in higher-income households are different from other Americans in their tech ownership and use.

95% of those in households earning over $75,000 use the internet and cell phones

Those in higher-income households are more likely to use the internet on any given day, own multiple internet-ready devices, do things involving money online, and get news online

Those in higher-income households are different from other Americans in their tech ownership and use.

Analysis of several recent surveys conducted by the Pew Research Center’s Internet & American Life Projects find that there are key differences between those who live in households making $75,000 or more relative to those in lower-income households.

Even among those who use the internet, the well off are more likely than those with less income to use technology. Of those 95% of higher-income internet users: 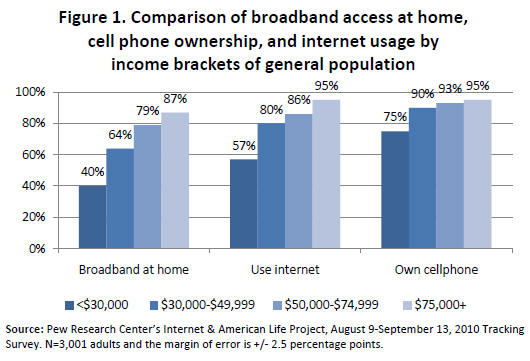 The differences among income cohorts apply to other technology as well

The relatively well-to-do are also more likely than those in lesser-income households to own a variety of information and communications gear.3

Background of this analysis

The analysis in this report covers the responses of those who did disclose their income.

Those with higher-incomes engage in most online activities more frequently

These recent Pew Internet surveys show that the internet users in the higher-income households are the most active participants in a range of online activities, when compared with those who have less income: 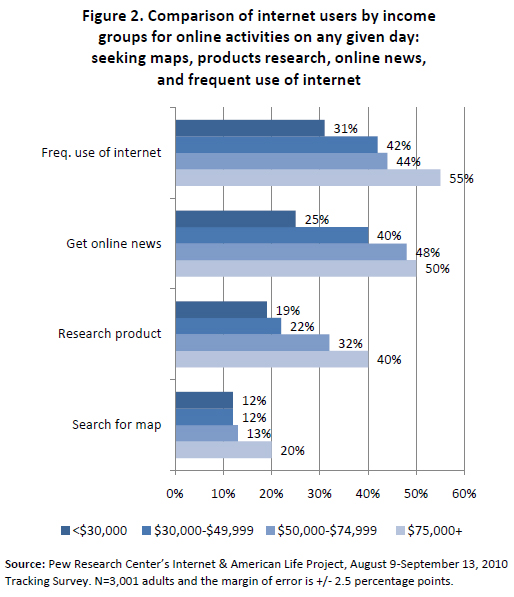 Where better-off Americans get their news

Those who fall in the top earnings category are also the biggest consumers of online news sources, with 80% of higher-income internet users (74% of the general population) seeking news on the internet.3

However, the higher-income households have not abandoned traditional media altogether; they also turn to print and television, especially for local news. Asked about various platforms where they might get the news on a typical day, 76% o those from higher-income households watch local and national news shows on television, 51% of this higher-income group said they get local news from a print version of a newspaper, and 22% read a print version of a newspaper for national news.1 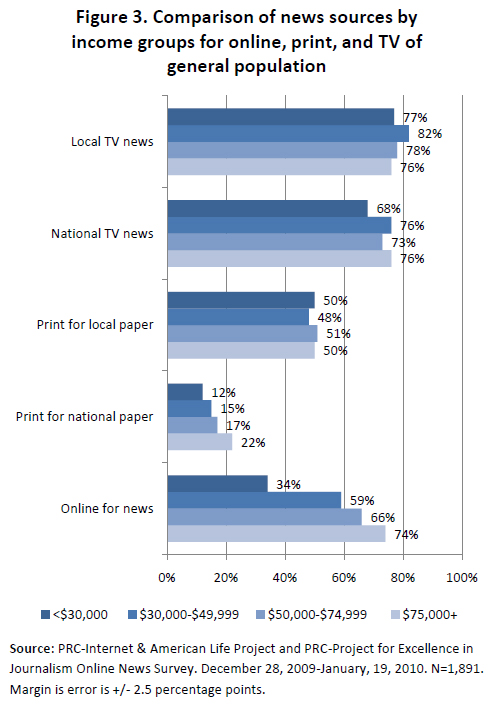 Yet, the online news consumption patterns of this more well off group stand in stark contrast to those living in the lowest income households.1, 2, 3 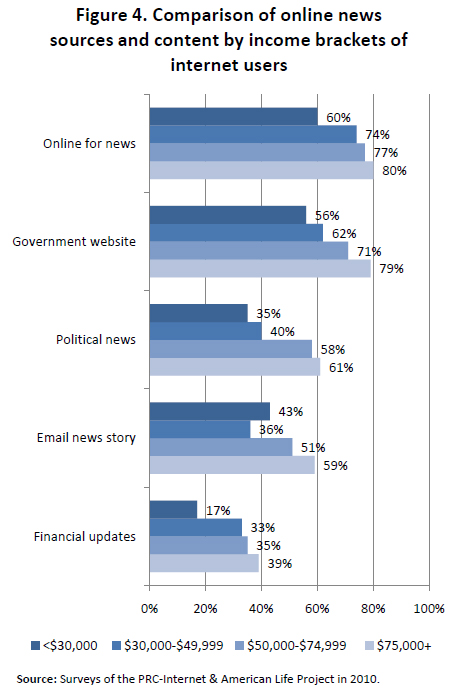 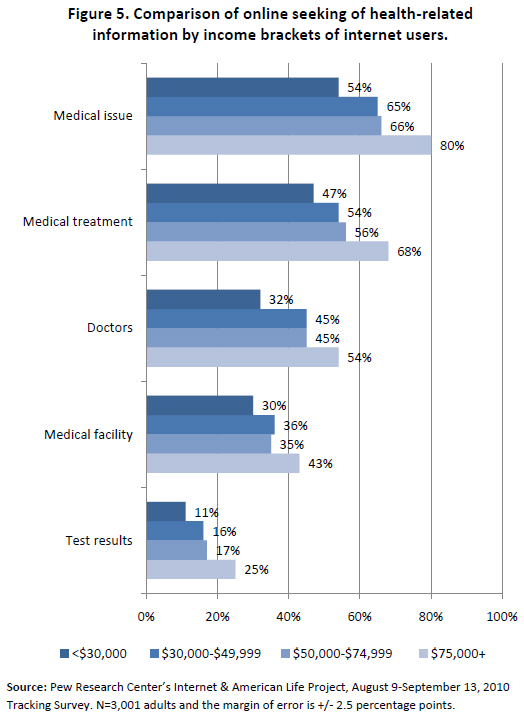 Engagement with online commerce by the higher-income households 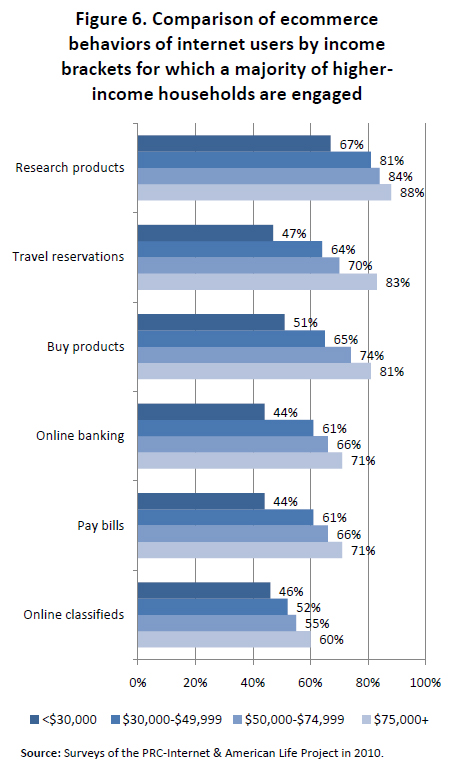 There are other e-commerce activities for which less than a majority of higher-income Americans on the internet engage, but they still conduct these activities at significantly higher percentages than other income groups, including paying for online content, reviewing products, rating products, and participating on online auctions.2, 3 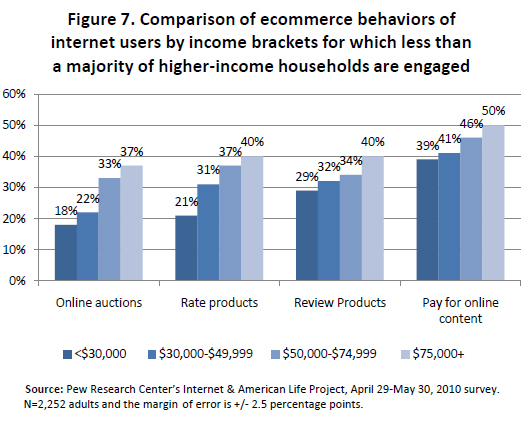 Use of internet-ready devices by higher-income households

Relatively prosperous Americans have multiple internet and other devices, with higher ownership of cell phones (95%), desktop and laptop computers (79% each), mp3 players (70%), and game consoles (54%) relative to other income groups.3 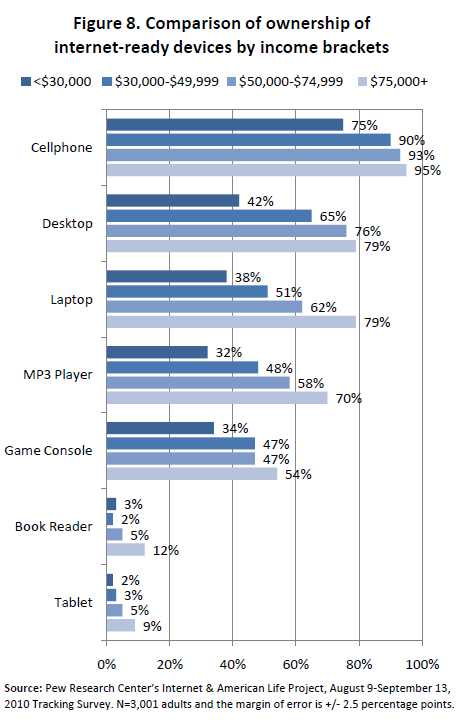 Concerning the use of the internet, differences involving gender, race, and educational level had no practical impact on internet use by income level.

Those living in suburban and urban areas are slightly more likely to be internet users than their rural counterparts.

There were also minor differences among the age groupings, especially with Trailing Boomers (ages 46-55) and Matures (ages 65-73), with larger percentages of these age groups using the internet when compared with those in the same age groups from lower-income households.

However, with both community type and age, the differences were slight relative to what could be explained just by household income.

We performed the same analysis for email usage. Again, most of these controlling factors were not substantial contributors to differences in whether someone was an email user or not.

Gender, race, and educational level had no practical impact on email use.

Those living in suburban and urban areas use email slightly more than their rural counterparts, although the differences were very slight.

With age, we again found that there were minor differences among the age groupings, specifically with Gen X (ages 34-45), Trailing Boomers (ages 46-55) and Matures (ages 65-73), with larger percentages of these age groupings in the higher-income using email than those in the same age groupings from lower-income households. Again, the practical differences were slight indicating that age was not a major contributing factor.

A look at the even more well-to-do: Those in households earning $150,000 or more

Given that $75,000 is only about one and half times the median household income of $49,777 4, we also examined those in the higher-income brackets exclusively.3  In the August-September 2010 Pew Internet survey there were 142 respondents who reported living in households earning $150,000 or more, which is the dataset used for this analysis.

Examining those living in households with an income of $150,000 or more, there are significant differences with the other income groups. The affluent are significantly more likely to use the internet (30% more) and email (25% more) than the rest of the American population.

Looking more closely at internet users, the affluent are more likely than other internet users to participate in video chat (22% more likely), pay bills online (19%) and get online news (11%).

In fact, technology saturates the lives of affluent Americans. Nearly all (96%) of this affluent demographic use the internet or email. Nine in ten (89%) of the high-income internet users have searched online for maps or directions, 86% have researched a product online, and 82% get a portion of their news online. 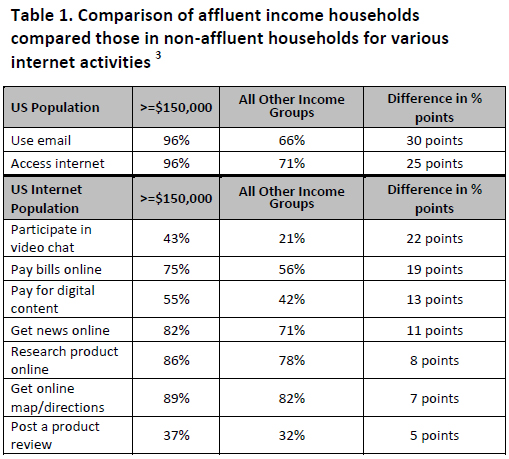 Next: Data and Methodology
← Prev Page
You are reading page1Page2
Next Page →