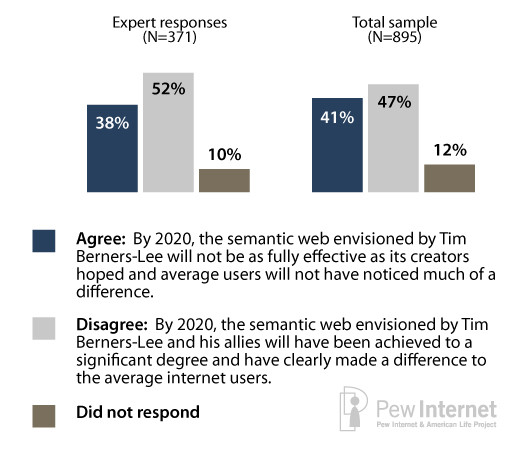 Sir Tim Berners-Lee, the inventor of the World Wide Web, has an even grander vision for what the web can be. He and his allies have been working through the World Wide Web Consortium on an evolving initiative they call the semantic web. Berners-Lee and co-authors wrote in Scientific American in 2001 that they see a future when machines can understand data and make meaningful connections between related items, all in the service of helping people get the material they want and complete the tasks that matter to them:

In the article, Berners-Lee and co-authors James Handler and Ora Lassila sketched out a scenario of how the semantic web would work and highlighted the keywords which indicate terms whose semantics, or meaning, were defined for the computer “agent” through the Semantic Web:

The Wikipedia entry on the semantic web elaborates the idea this way: “The semantic web is a vision of information that is understandable by computers, so computers can perform more of the tedious work involved in finding, combining, and acting upon information on the web.” In his 1999 book “Weaving the Web,” Berners-Lee said: “I have a dream for the Web [in which computers] become capable of analyzing all the data on the Web – the content, links, and transactions between people and computers. A ‘semantic web’, which should make this possible, has yet to emerge, but when it does, the day-to-day mechanisms of trade, bureaucracy and our daily lives will be handled by machines talking to machines. The ‘intelligent agents’ people have touted for ages will finally materialize.”

People commonly refer to the semantic web as the next generation of the World Wide Web – or, sometimes. Web 3.0. The hope is that it might improve data aggregation to such an extent over the next decade that an internet search that now yields hundreds or thousands or millions of responses (many not associated with the searcher’s needs) will generally deliver only the specific information she seeks.

The concept is so revolutionary that people have difficulty describing it in just so many words and its proponents self-consciously struggle to describe the “killer app” for the semantic web that will make users understand its power – and support its creation. Berners-Lee describes it as “getting one format across applications” so the semantic web standards can enable people to gain access to the information they want and use it any way they want, for instance, being able to mesh data from a personal bank statement and a personal calendar. He has said he would like to see a future web that allows people to connect their ideas with the ideas of others, building a system for people to share parts of ideas in a way that can make them whole.

Success for the semantic web will depend upon people working together to accept its standards (GRDDL, RDFa, OWL, SPARQL, and others) and its naming and tagging ontologies. Sites already implementing semantic web elements include DBpedia, Twine, Garlik, GeoNames, RealTravel, and MetaWeb.

The semantic web has some vocal opponents and critics. One is blogger, author, and speaker Cory Doctorow who described in a 2001 essay titled, “Metacrap: Putting the Torch to Seven Straw-Men of the Meta-topia” what he considered to be the seven obstacles to getting reliable data: People are lazy; people cannot accurately observe themselves; people lie; people are stupid; schema are not neutral; metrics influence results; and there’s more than one way to describe something.

Another critic is author, blogger, and professor Clay Shirky. In a 2003 column titled, “The Semantic Web, Syllogism, and Worldview” he wrote, “The semantic web is a machine for creating syllogisms…despite their appealing simplicity, syllogisms don’t work well in the real world because most of the data we use is not amenable to such effortless recombination …. There is a list of technologies that are actually political philosophy masquerading as code, a list that includes Xanadu, Freenet, and now the semantic web … like many visions that project future benefits but ignore present costs, it requires too much coordination and too much energy to effect in the real world, where deductive logic is less effective and shared worldview is harder to create than we often want to admit.”

Shirky did concede, however, that some positive results will come from the efforts made toward creating a semantic web.

Accompanying the hopes for the semantic web and other Internet development are fears about the future of privacy and identity and the need for security in an architecture in which growing amounts of information are shared in a worldwide data cloud. For instance, security is vital for companies and individuals who employ semantic web products and technologies. When search for aggregated data becomes more specific, a simple search for a person’s name can yield health records, parking tickets, mortgages, signatures, travel records, video-viewing habits, and any other recordable, databased information. People’s Web-search histories, financial transactions, mailing lists, and surveillance photography of them and their homes are being collected and can be accessed, forming a “digital shadow” for every individual and group on record.

With that all as background, here are some of the major themes that emerged in the answers to our survey:

Too many complicated things have to fall into place for the semantic web to be fully realized. The idea is a noble one and gives the technology community something to shoot for. But there is too much variation among people and cultures and economic competitors to allow for such a grand endeavor to come to fruition.

Forget the skeptics. The semantic web will take shape and launch an “age of knowledge.” Early successes will build momentum.

Improvements are inevitable, but they will not unfold the way Tim Berners-Lee and his allies have sketched out. They will be grassroots-driven rather than standards-driven. Data mining, links, analysis of social exchanges will help drive the process of smartening the web without more formal semantic apps.

The timeline of this question is off. The semantic web is shaping up, but it will take longer than the 10 years the question cited.

The semantic web will not really take off until it finds its killer app – something we all find that we need.

The killer app will come when we can ask the internet questions – and that will make things much more efficient. Conversational search will be the key to opening users’ eyes to the potential for the semantic web.

Creating the semantic web is a difficult thing that will depend on machines that can straighten out the massive confusions and complications that humans create.

The track record of proponents of artificial intelligence is just not good enough to justify the hope that machines will learn to understand the human meaning of things.

Human tendencies, preferences, and habits will determine the extent of the success of the semantic web – and probably thwart full realization of the dream. If people take the time to create sites and databases using information standards, then major progress will be made. Yet plenty of factors could, and likely will, stand in the way.

Sure, there will be some resistance, but there are fairly strong incentives to cooperate, too.

There will be an upstairs-downstairs quality to adoption and use. Elite and specialized users will be able to take advantage of the semantic web in ways that everyday internet users likely will not. Business applications will have more stakeholders than consumer or social apps. Particular activities will be the norm, rather than activities that appear similar throughout the web.

The very essnce of the idea of the semantic web continues to evolve, as does every aspect of the Internet; it is difficult to predict what will happen because the aspirations of its proponents are shifting to take account of new realities and current limitations.

There are some applications and activities online that show the promise of the semantic web, among them: TripIt, Xobni, TrueKnowledge, Wolfram|Alpha, Open Calais, Hakia.

Some point out that despite human differences, the promise of the semantic web gives people significant incentives to cooperate in building it. Some say there are no incentives.

Some made suggestions about what a semantic web should aspire to be.

Below are links to video and summaries of several sessions at FutureWeb 2010, in which experts from this survey discuss the future of the internet:

Next: About this report
← Prev Page
Page1You are reading page2Page3
Next Page →

Platforms & ServicesFuture of the Internet (Project)