In the past three years, developments in social networking and internet applications have begun providing internet users with more opportunities for sharing short updates about themselves, their lives, and their whereabouts online. Users may post messages about their status, their moods, their location and other tidbits on social networks and blogging sites, or on applications for sending out short messages to networks of friends like Twitter, Yammer and others.

As of December 2008, 11% of online American adults said they used a service like Twitter or another service that allowed them to share updates about themselves or to see the updates of others.1 Just a few weeks earlier, in November 2008, 9% of internet users used Twitter or updated their status online and in May of 2008, 6% of internet users responded yes to a slightly different question, where users were asked if they used “Twitter or another ‘microblogging’ service to share updates about themselves or to see updates about others.”

Of the standalone applications that enable short messaging to a network of friends, Twitter is the most well known. First made available to those online in August 2006,2 Twitter allows users to send messages, known as “tweets” from a computer or a mobile device like a mobile phone, Blackberry or iPhone. Users of the service are asked to post messages of no more than 140 characters and those messages are delivered to others who have signed up to receive them such as family, friends or colleagues.

Twitter’s open development platform allows outside developers to build add-on applications to expand the service’s functionality. Twitter users can select from a variety of third-party Twitter interfaces, browser plug-ins, photo- and video-sharing applications that enhance mobile and computer-based use of the basic application. Users have themselves expanded the information carried in a twitter message through the development of in-tweet shorthand and symbols3 that allow for the sharing, replicating and searching of tweets.

As with many technologies, enthusiastic users have used Twitter for more than just answering the question, “What are you doing?” Twitter has been used to help organize and disseminate information during major events like the 2008 California wildfires, the recent American elections, the Mumbai massacre and even the January 2009 crash of US Airways flight 1549 into the Hudson River. Janis Krum, a passenger on a ferry that rushed to the scene, took a photo of the plane with a cell phone and sent it out via his Twitter feed.8 Twitter and other status updates have also been used for many other purposes including the airing of complaints against companies, sharing ideas, forwarding interesting material, documenting events, conversing and flirting.

Given the youth of most Twitter users, it is not surprising to find that online Americans who live in lower-income households are more likely to use Twitter than more affluent Americans. Some 17% of internet users in households earning less than $30,000 tweet and update their status, compared with 10% of those earning more than $75,000 annually.10 Younger adults generally earn less money than older adults.

Wireless internet users are also more likely to be users of Twitter and other status updating services; 14% of users who access the internet wirelessly via a laptop, handheld or cell phone have used a service like Twitter, compared to 6% of users who go online but do not do so wirelessly.

Blogging shows a similar pattern; 27% of bloggers Twitter, compared with just 10% of those who do not keep a blog. Overall, 13% of internet users have created a blog.

A look at the demographic profile of Twitter users as a whole reveals some additional details about who uses Twitter and how they communicate and consume information.

Twitter users are more mobile in their communication and consumption of information.

Twitter users and status updaters are a mobile bunch; as a group they are much more likely to be using wireless technologies – laptops, handhelds and cell phones — for internet access, or cell phones for text messaging. 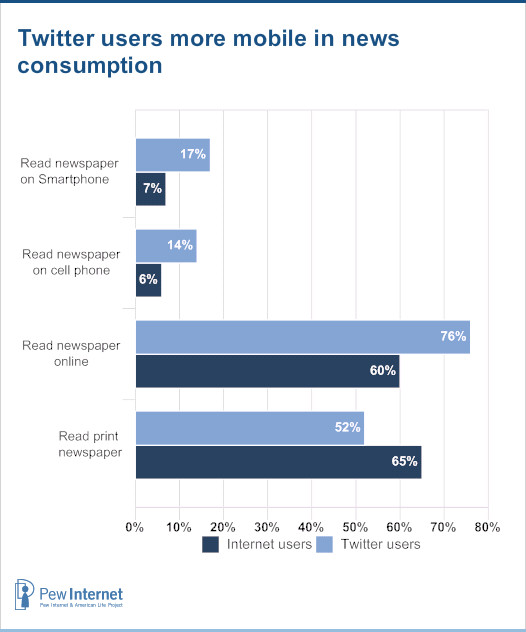 Regardless of the platform, Twitter users are also significant consumers of blog content; 21% read someone else’s blog “yesterday” and 57% of Twitterers have ever read a blog. By comparison, 9% of those who go online but do not Twitter read someone else’s blog yesterday, and 29% have ever read a blog. Twitter users also keep blogs at a greater rate than the overall online population; 29% of Twitter users have ever created a blog, and 8% worked on a blog “yesterday.” In contrast, 11% of internet users have created a blog and 3% are working on their blog on any given day.

In conclusion, Twitter users engage with news and own technology at the same rates as other internet users, but the ways in which they use the technology – to communicate, gather and share information – reveals their affinity for mobile, untethered and social opportunities for interaction. Moreover, Twitter as an application allows for and enhances these opportunities, so it is not so surprising that users would engage in these kinds of activities and also be drawn to an online application that expands those opportunities.