Investment in broadband has become part of the broader discussion about President Obama’s economic stimulus package. Even though the size of the stimulus and the share that might be devoted to broadband are still unspecified, it seems likely that the new Administration will take steps to encourage investment in broadband infrastructure.

Although job creation is the main topic in this debate, there are really three policy goals associated with broadband in the stimulus package: creating new jobs, creating new broadband subscribers, and improving the broadband experience for all subscribers through faster networks. The goals are obviously related. New or better broadband infrastructure might attract new subscribers or encourage existing subscribers to upgrade to faster service. New (or upgrading) subscribers place demands on communications infrastructure, which in turn may require more workers to serve them. How easy will it be to increase the pool of broadband subscribers or to encourage existing ones to upgrade their connection speeds? Two surveys conducted by the Pew Research Center’s Internet & American Life Project help address these issues.

Our May 2008 survey asked dial-up users why they do not have a broadband connection at home and our December 2007 asked non-internet users about the reasons they do not use the internet. The table below summarizes the results. 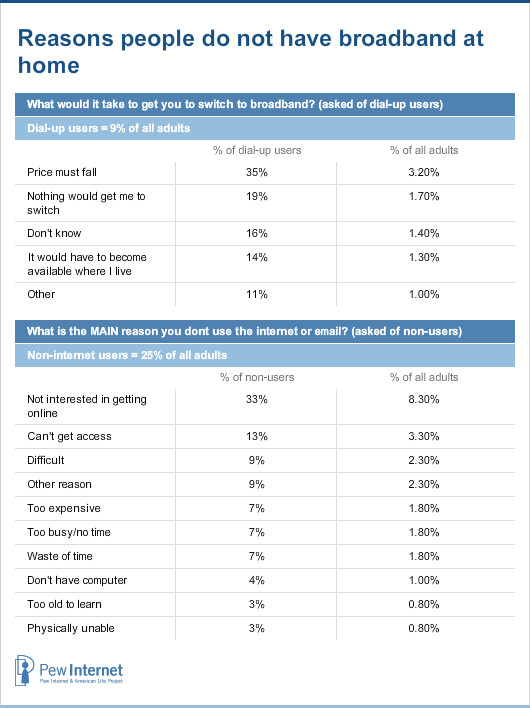 To try to make better sense of this variety of reasons, the table below consolidates the data into four categories. 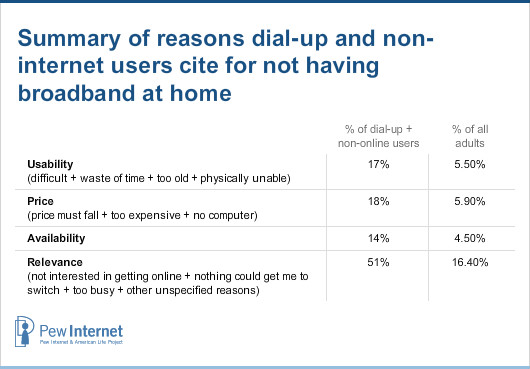 Though the outlines of Obama’s broadband stimulus plan are not yet clear, two barriers identified above are likely targets of such a package: availability and price. These are the main issues for about a third of the adult population currently without broadband service. Providing incentives to build broadband infrastructure directly addresses the availability problem and could be of particular help to Americans living in rural areas, where 24% of dial-up users say they cannot get broadband because high-speed infrastructure doesn’t reach their home.

The price barrier might be addressed in the Obama package, as has been proposed by Free Press and others, by changing the Lifeline and Link-up programs that presently provide subsidies for telephone access so that the programs can also subsidize home broadband access.2

Two-thirds of non-broadband adopters, however, do not seem likely targets of efforts to boost the economy through broadband investment. Usability of broadband and other information appliances is mainly a matter for the private sector; friendlier design might make getting a new information service viable for some people.

The largest barrier – relevance – is arguably a catch-all category that captures a range of adoption hurdles that people cannot crisply articulate. When half of dial-up and non-users cite reasons such as “not interested” or “nothing could get me to switch,” it seems clear that networked digital resources do not play enough of a role in their lives to justify a broadband connection.

Addressing the reasons pertaining to relevance is likely to be time-consuming and difficult. Non-adopters are older and lower-income Americans, and it would take time to undertake the training and support needed to turn them into competent online users. Doing this is not a Herculean task — plenty of models exist to provide online training for low-income and elderly people. But legislators may decide that an economic stimulus package is not the vehicle for expanding on these models.

Finally, let’s turn to the question of the demand for more speed among existing high-speed users. Our May 2008 survey found that 29% of broadband users say they already pay more for home broadband speeds that are higher than the standard ones advertised by their carriers. The remaining 71% either have the standard package or don’t know whether they pay a premium. Assuming new “souped up” broadband costs more than existing offerings, at least one-third of home high-speed users are good candidates to take that step.3

So, if more and faster broadband is provided, will people come? The analysis here suggests that the answer is “yes,” but that it may take longer than some advocates anticipate. To be sure, targeted efforts to address infrastructure gaps and cost barriers could, within a few years, boost broadband adoption by as much as 10 percentage points. And one-third of existing broadband subscribers are low hanging fruit to adopt faster broadband soon after it is available. However, one-in-five Americans currently don’t have broadband for reasons that won’t be addressed by price cuts or a fiber node in the neighborhood. It will take time to get them up and running on broadband — probably longer than the impacts of the stimulus package are intended to last.