The current state of the online transition

Since Election Day, 15% of all online Americans have visited a website affiliated with the Obama transition effort. In partisan terms, 24% of online Obama voters have visited transition-related websites.3 Moreover, even fans of his opponents are going online to see what all the fuss is about—among McCain/Palin voters who go online, 10% have visited a transition website.

Taken together, this means that 27% of wired Obama voters have gone online to get information or participate in discussions about the presidential transition process.

Prior online involvement during the presidential race is strongly predictive of online voter engagement during the transition process. Among those Obama voters who got online news about the election or were politically active online during the campaign (we refer to these individuals as online political users), 33% have gone online to track or discuss the transition process during the post-election period. By contrast, among Obama voters who use the internet but were not politically engaged during election season, just 4% have gone online to learn about or share their thoughts on the new administration.

Otherwise, online Obama supporters with different demographic and socio-economic characteristics tend to use the internet to keep up with the transition at roughly similar rates. The primary exception is older voters, who have not kept up with the transition at the same rate as younger Obama supporters, even among the cohort of seniors who go online. 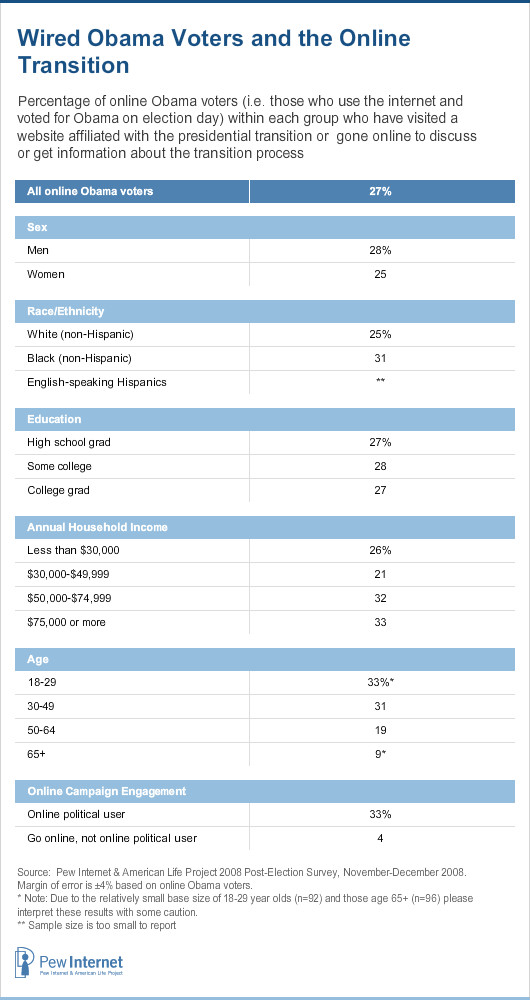 Of course, the Obama administration is not the only political entity to go live since election day. On the other side of the partisan divide, the online Republican community has been debating how to mobilize conservative voters and elect GOP candidates in the future, both on existing sites like redstate.com and on new entities such as rebuildtheparty.com.

In all, 5% of online Americans (and 9% of Republicans who go online) have visited websites related to efforts to rebuild the GOP. As was seen with Obama voters, GOP voters with prior exposure to the online political debate during election season are much more heavily involved in online post-election efforts than GOP voters who use the internet but are not engaged in the online political debate. Some 11% of politically-engaged internet users who supported McCain have visited such sites, compared with fewer than 1% of McCain voters who use the internet but are not politically engaged online.4

Next: Voters expect direct communication with their preferred candidate or party leaders
← Prev Page
Page1You are reading page2Page3Page4
Next Page →

Post-Election Voter Engagement
Obama voters expect to remain mobilized
The Internet’s Role in Campaign 2008
Joining the Discussion at Change.gov
The Internet and the 2008 Election
5 facts about presidential and vice presidential debates
Quiz: Where do you fit in the political typology?
The 2020 Trump-Biden matchup
Important issues in the 2020 election
Many Americans Get News on YouTube, Where News Organizations and Independent Producers Thrive Side by Side