62% of all Americans are part of a wireless, mobile population that participates in digital activities away from home or work

According to the Pew Internet Project’s December 2007 survey:

This comes to 62% of all Americans who have some experience with mobile access to digital data and tools. That is, they have either used a cell phone or PDA for a non-voice data application or logged on to the internet away from home or work using a wireless laptop connection or with a handheld device. The Pew Internet Project’s December 2007 survey interviewed a sample of 2,054 adult Americans, which included 500 respondents contacted on their cell phones.

Accompanying this changing nature of access – no longer slow and stationary, but now fast and mobile – has been a transformation in how people value their media access tools. When asked how hard it would be to give up a specific technology, respondents are now most likely to say the cell phone would be most difficult to do without, followed by the internet, TV, and landline telephone. This represents a sharp reversal in how people viewed these technologies in 2002. 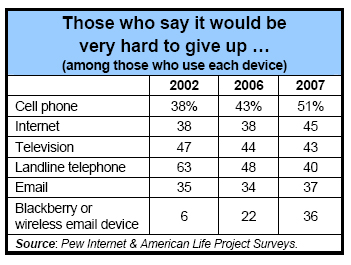 Leading the way in this world of untethered access are young adult Americans, Hispanics, and African Americans. A majority of adults under age 30 and Hispanics would find it hardest to do without their cell phones – and are much more likely to say it would be hard to be without a cell phone than to be without the internet or email. Hispanics in the United States are a more youthful group than whites or African Americans, but Latinos’ attachment to the cell phone stands out even after controlling for age and other demographic and socio-economic factors.

Here’s how the data breaks out for each of the ten activities asked about relating to non-voice data applications on a cell phone or PDA. 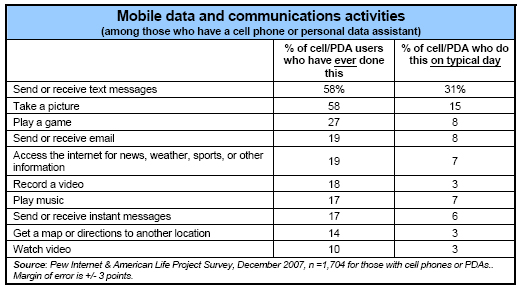 Among the 75% of Americans with either a cell phone or a PDA:

For internet access on the go, online users were asked how often they use the internet someplace other than home or work. Some 29% of internet users say they do this at least every few weeks, with 21% doing this at least a couple days a week.

Focusing more narrowly on wireless access on the go, respondents were asked whether they had used a wireless internet connection on a laptop computer, a cell phone, or a PDA.1 Adding up those who had said “yes” to any of those questions yielded the result that 52% of internet users have used a wireless connection at one time to go online away from home or work. This translates into 41% of all Americans who have logged on wirelessly away from home.

Hispanics and young adults lead the way with handheld devices

Demographically, the clearest dividing lines for the different handheld activities are age and race. For English-speaking Hispanics, the cell phone is an oft-used and multifaceted device – more so than is the case for white or black Americans.2 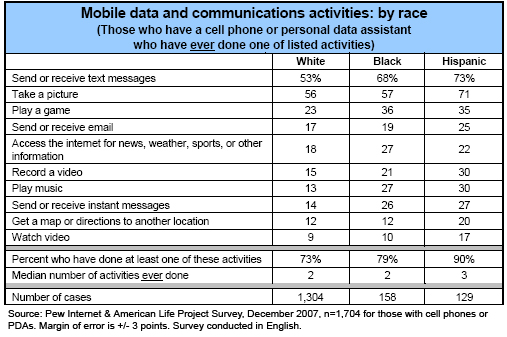 On a typical day, more than half of English-speaking Hispanics do something on their cell phone that might involve sending or receiving data. 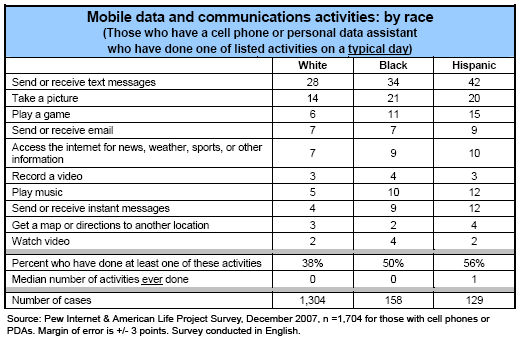 There are also differences across age groups in the use of handhelds for data applications. 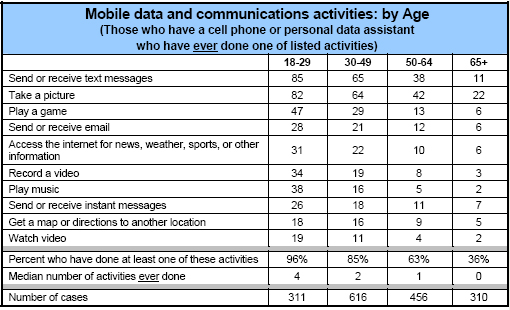 Roughly the same share of “under age 30” adults (60%) on the average day use a handheld device for text messaging as sends or receives email (62% do). These numbers suggest that, while alternative forms of digital chatter (e.g., texting) are important to young adults, email remains a part of their daily electronic communication activities, although it may be less central for young adults as other applications compete for their attention. 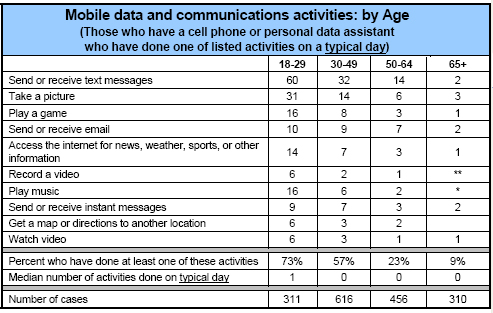 Hispanics and young adults also lead the way for “on the go” away from home or work.

Most Hispanics and young adults say cell phones would be very hard to give up. 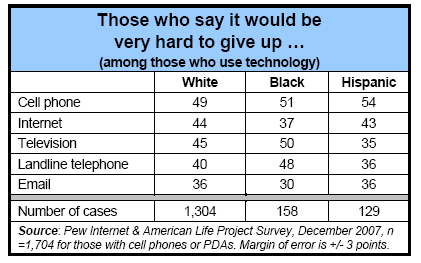 For young adults, close to two-thirds (62%) say it would be very hard to do without a cell phone, more than the half (51%) who say that about the internet and more than twice the share that feels this way about the plain old landline telephone. 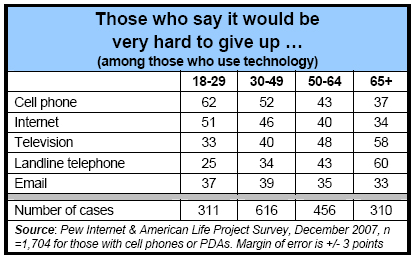 The vast majority of people who have accessed digital data or tools on the go are internet users. Among this group, fully 91% count themselves as internet users. Among the remaining 9%, this group demographically tilts toward African American men in their 40’s with low incomes. Within this group, 24% have household incomes that of $25,000 annually or less, 25% are African American, and more than half are men. All have cell phones, and members of this group are more likely to have cell phones only as their means of telephone access than the general population (by a 30% to 21% margin).3 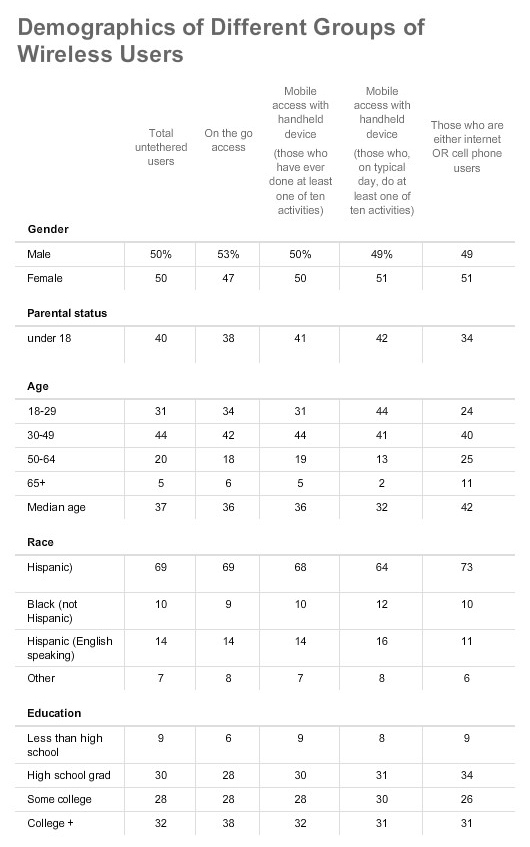 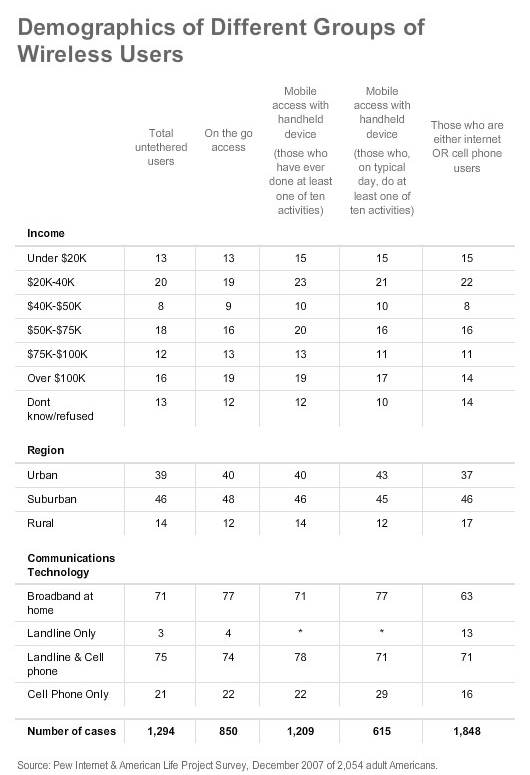 Next: Questions and Data
← Prev Page
You are reading page1Page2Page3
Next Page →