Experts have long anticipated the mainstreaming of online video.

“The really interesting highway applications will grow out of the participation of tens or hundreds or millions of people, who will not just consume entertainment and other information, but will create it, too. Until millions of people are communicating with one another, exploring subjects of common interest and making all sorts of multimedia contributions, including high-quality video, there won’t be an information highway.”

“By the year 2005, Americans will spend more time on the Internet than watching network television and videocassette rentals will have been replaced by easily available video-on-demand services.”

While in 2007 we’re still far from Negroponte’s vision of an internet-dominated world where Americans spend more time online than they do watching traditional broadcast and cable television, we are very clearly speeding towards that vision — right along the interactive highway of user-generated content that Bill Gates described in 1995. What once might have seemed like pie-in-the-sky proclamations about the delivery of online video are now clear realities as the growing adoption of broadband, coupled with user-friendly video sharing applications that offer deep catalogs of compelling content draw more viewers every day.

Online video has been a central feature in a growing discussion about the impact of user-driven “Web 2.0” technologies. YouTube and other video sharing sites are often held up as powerful examples of both the social and monetary value of applications built around user contributions. And as users have realized the unlocked potential of online video, a new channel of interactive mass communication has started to emerge in daily life.

57% of the online public has used the internet to watch or download video.

Overall, 57% of adult internet users say they watch or download video content online. On a typical day, 19% report watching or downloading some type of online video content. Other estimates, which include the passive viewing of online video, such as “in-banner” advertising embedded in many popular websites, suggest the online video viewing audience may be even larger.6 However, for the purposes of our survey, we were primarily interested in interviewing those who actively seek out and watch online video.

In keeping with other media consumption trends, a familiar refrain rings loud and clear: It’s a broadband thing. 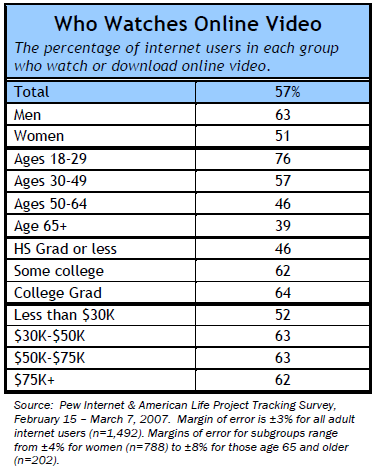 Frequency of internet use is often bolstered by having an always-on high-speed connection, and this reality is coupled with a greater propensity for daily internet users to watch and download video. Nearly two-thirds (65%) of daily internet users consume video content online at least from time to time, while just 40% who are online several times per week do so.

Young adults (those ages 18-29) with internet access are also among the most voracious video viewers. Three in four wired young adults (76%) report online consumption of video, compared with 57% of internet users between ages 30-49. Less than half (46%) of internet users ages 50-64 watch or download video and just 39% of those age 65 and older do so.

Some 8% of internet users say they have uploaded a video file online for others to watch.

Users who post video are a much smaller group than those who watch; about one in twelve (8%) adult users say they have uploaded a video file online where others can watch it.

Young adults also trump older users in their experience with posting video content; 15% of users ages 18-29 have uploaded videos, compared with 8% of those 30-49 and roughly 5% of users age 50 and older who have posted video for others to watch.  At the same time, a considerable divide between those who watch and those who contribute content persists even among this highly wired group. Young adults are five times more likely to watch than they are to upload.

As is the case with audio consumption online, men are also more avid video viewers and posters than women. Nearly two-thirds of online men (63%) use the internet to watch or download video, while just about half of online women do so (51%). Video posting produces a more dramatic disparity; 11% of online men say they upload video, compared with only 6% of online women.

However, when looking exclusively at the viewing and uploading habits of young adults (those ages 18-29), young men and women report roughly the same incidence of video watching and uploading. Instead, users age 30 and older are the ones who exhibit the most pronounced gender differences.

Most video viewers watch at home, but one in four report at-work viewing.

Video viewers who are ages 30-49, those who have a college degree, and those living in households earning $75,000 or more are among the most likely to watch video at work; roughly one-third of each group views online video at their workplace. However, those who have a broadband connection at work beat out all of these other demographic groups; 37% of online video viewers who have a high-speed connection at work watch video there.

Yet another sign of young adults’ mobile tech lifestyle, those ages 18-29 are more than twice as likely when compared with any other age group to watch online video from someplace other than home or work. While 41% of video viewers ages 18-29 watch video from a “third” place, just 16% of those 30-49 do so.

Half of young adult video viewers say they watch video on YouTube.

Overall, 27% of online video consumers say they watch or download video from YouTube, and of those who watch or download videos from more than one location, 29% say YouTube is the place where they view online video most often.  Young adults are almost twice as likely to point to YouTube as a source for online video; 49% of video viewers ages 18-29 say they watch YouTube videos. MySpace garners a much smaller slice of the young adult audience (15% of viewers), but one that is still considerably larger than the segment who use cable and network TV sites (7%) or news websites (6%) as sources for video.

Male viewers are more likely than female viewers to use YouTube (31% vs. 22%), but otherwise, men and women generally report the same levels of usage across every source they were asked about. Frequent viewers of online video also have a greater tendency to use YouTube; 39% of video viewers who say they watched an online video “yesterday” are users of YouTube compared with just 21% of viewers who did not watch “yesterday.” 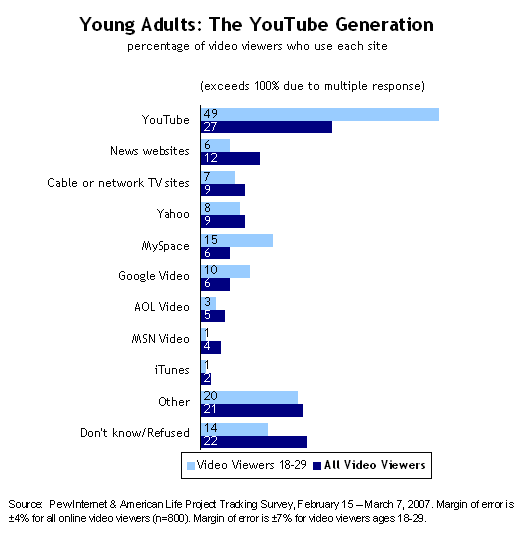 How they watch: Most have watched online video with other people.

Many studies have illustrated the social nature of television viewing, but the solitary nature of viewing digital video in personal computing environments has raised questions in the research community about how to best prepare for a world in which the “natural” atmosphere for sociable viewing might be disrupted by technology.7

However, findings from our study suggest that social motivation – that is, a desire to share a viewing experience with someone else – has influenced the way users experience online video. One sign of this can be observed in the way people watch; online video consumers are not exclusively confined to watching videos alone at their computer. The picture of the lone internet user, always buried in his or her computer does not emerge from our survey. Overall, 57% of online video viewers have watched with other people, such as friends or family.

Young adults are the most social online video viewers; three out of four online video consumers (73%) ages 18-29 say they have watched with others. That compares with 58% of those ages 30-49, and just 36% of those ages 50 and older. Those who say they watched video “yesterday” also report more social viewing when compared with those who did not watch online video on the day prior to the survey (69% vs. 51%). Men and women report equal levels of social video viewing.

Some video applications, such as Joost, have tried to anticipate the desire users have to share their real-time viewing experience by providing a window to chat with others while watching from different locations. For those who upload videos, YouTube has recently added features as part of its Active Sharing application that allow uploaders to see logged in users who are actively watching the videos posted to their channel.

More than half share links to the video they find with others.

The prevalence of link sharing among video viewers serves as another sign that social motivations have fueled the spread of online video. Those who wish to share the video they find with others without gathering them around the same screen can also “watch together” in an asynchronous way simply by sharing links to posted video content via email, IM, or other means.

Again, the youngest viewers express more interest in sharing what they find. In this way, young adults could be considered the most “contagious carriers” in the viral spread of online video. Two in three video viewers ages 18-29 send others links to videos they find online, compared with just half of video viewers ages 30 and older. Young adults are also sharing video with greater frequency than older viewers; 42% send video links to others a few times per month or more. 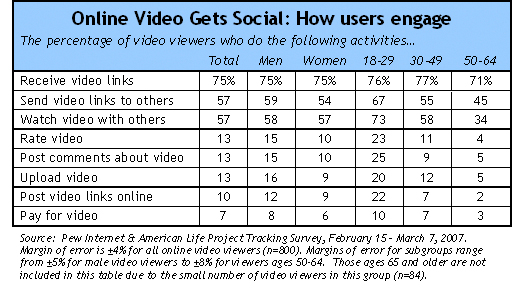 One in ten have posted video links to websites or blogs.

Some who feel compelled to share the video content they find online prefer to do so in a more public way. Overall, 10% of video viewers say they share links with others by posting them to a website or blog. Again, younger users have a greater tendency to share what they find; while 22% of video viewers ages 18-29 post links to video online, just 7% of those ages 30-49 do so.

The flurry of link sharing by younger users has helped to shape the most-viewed, and top-rated lists on popular video sharing sites. Many young adults and teenagers, who are avid users of social networking sites and blogs, post videos to their personal pages and profiles, which then get linked to or reposted by many other users.

One in five have rated video or posted comments after watching online.

One of the features popular on many video sites is the ability to rate or post feedback about the content on the site. For instance, during the now legendary run of Lonelygirl15 videos on YouTube, viewers used the comments field to debate the authenticity of the diary-style videos in which the young girl shared her thoughts and daily drama with the world. Overall, 19% of video viewers say they have either rated an online video or posted comments after seeing a video online.

Next: What They Watch Online
← Prev Page
Page1Page2You are reading page3Page4Page5
Next Page →

Online Video Acknowledgements
The Audience for Online Video
Experts have long anticipated the mainstreaming of online video.57% of the online public has used the internet to watch or download video.Three in four young adult users watch or download video online. On a typical day, nearly one in three consume online video.Some 8% of internet users say they have uploaded a video file online for others to watch.Most video viewers watch at home, but one in four report at-work viewing.Half of young adult video viewers say they watch video on YouTube.How they watch: Most have watched online video with other people.More than half share links to the video they find with others.Three in four video viewers receive links to online video.One in ten have posted video links to websites or blogs.One in five have rated video or posted comments after watching online.
What They Watch Online Methodology