Use of the internet for politics did not give particular advantage to either party. Still, online political activists favored Democratic candidates. 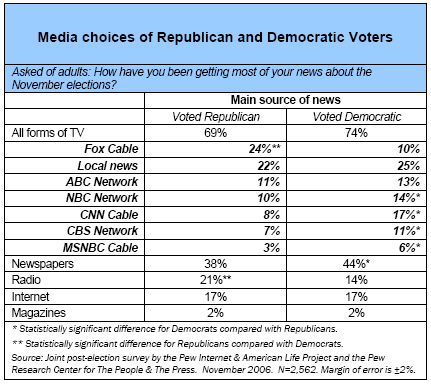 The one meaningful distinction emerged among online political activists. They had a statistically meaningful preference for Democratic candidates: 52% of those activists voted for the Democratic candidates, while 35% voted for Republicans.  This might stem from the more liberal intensity of political content creators and sharers, though liberals are not the dominant ideological group among political content creators.

Liberal Democrats were particularly drawn to some online political activities.

Liberal Democrats are sometimes the most interested in online political news and information and who are the most active in pursing political activities on the internet. The number of cases in the sample of campaign internet users is too small for much analysis. For instance, there were 82 people in the campaign internet user group who said they were moderate or liberal Republicans and 102 who said they were liberal Democrats.

Still, there were some clear differences that applied to liberal Democrats. Among ideological groups, liberal Democrats were the most likely to be online political activists, to get political material from blogs, international news organizations, email listservs and humor or satire sites.