12% of internet users have downloaded a podcast

These results come from a nationally-representative telephone survey by the Pew Internet & American Life Project from August 1 – August 31 of 2,928 adults. The portion of the survey that covered podcast downloading was administered to 972 internet users. The margin of error on the internet sample is plus or minus 3.5 percentage points.

The range of content available to those interested in podcasts has exploded over the past two years. In 2005, the New Oxford American Dictionary declared “podcast” the word of the year, with the accompanying definition of a podcast as, “a digital recording of a radio broadcast or similar program, made available on the Internet for downloading to a personal audio player.” Yet, while early podcasters typically distributed syndicated audio files and radio shows, podcasters now routinely deliver many kinds of digital multimedia content, including video, images and text.

The array of individuals and mainstream media institutions that now provide podcasts has also expanded dramatically. For example, in November of 2004, Podcast Alley, a podcast directory website, listed fewer than 1,000 podcasts for download. Today Podcast Alley catalogs more than 26,000 different podcasts, totaling more than 1 million episodes.1 In addition to homegrown podcasts that cover topics ranging from music and fashion to religion and politics, mainstream media institutions such as NPR, the BBC and Comedy Central now regularly provide podcasted material as an alternative way to distribute their content. 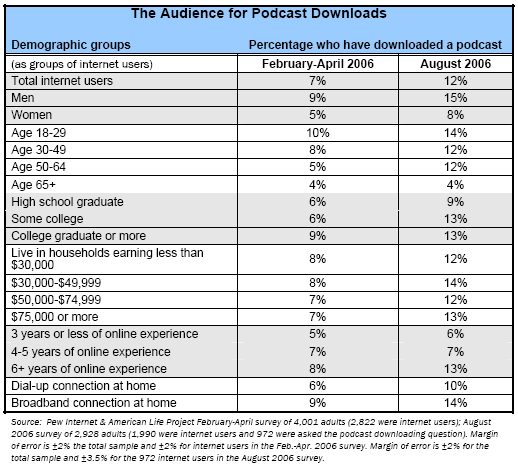 While an iPod or MP3 player is not necessary to listen to or view podcasts, the proliferation of mobile media gadgets has helped fuel the demand for digital content that can be both time-shifted and place-shifted for listening and viewing on-the-go. According to our February-April 2006 survey, 20% of American adults and 26% of internet users report ownership of an iPod or MP3 player. Young adults, those with broadband access and parents are considerably more likely to have an iPod or MP3 player.

In both the August 2006 and February-April 2006 survey, we asked a new podcast downloading question of all internet users, rather than only asking the question of those who owned iPods or MP3 players (as we did in a previous report released in April 2005). This new method allows us to capture users who might download podcasts to their computer, but do not necessarily have a portable player. Since our 2005 report, podcast listening and viewing have become more accessible to the average user – in part, because newer versions of the popular iTunes Music Store incorporate an easy way for a casual user to sample, download and subscribe to free podcast content.2 Other popular podcast directories include Podcast Alley and Podcast.net.

Another change instituted with this new wording is the inclusion of a reference to podcast downloads that one can listen to or view, which allows us to capture the larger universe of those who have experience downloading a podcast of any kind.